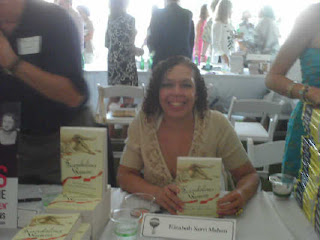 I was delighted to spend this past Saturday on the South Fork of Long Island at the Authors Night benefit for the East Hampton Library. As a native New Yorker, it was fun for me to get a chance to not only sign books but also help support a good cause, libraries,  and I got to do it my own home state.  It was just a short jitney ride (okay it was a 3 hour jitney ride) out to beautiful East Hampton for the event. I brought my good friend Mala out with me to help record the event.  It was her first tip out to the Hamptons so it was nice to be able to share this event with her.

And what an event it was! Talk about star-studded! I couldn't believe my eyes when I saw some of the authors who would also be signing that night.  Robert Caro, who has written well-regarded biographies of Lyndon Johnson, Barbara Goldsmith who was signing copies of her biography of Marie Curie, Annette Blaugrund who has written a biography of Harriet Hubbard Ayer (one of the first women to found a cosmetics company.), David S. Reynolds, who has written MIGHTIER THAN THE SWORD, about Harriet Beecher Stowe and UNCLE TOM's CABIN. The list goes on and on. I felt humble just being under the same tent as some of these authors.

The authors were asked to arrive at 4:30 to get settled in.  To my great surprise, I was seated next to film critic Jeffrey Lyons.  I grew up watching Mr. Lyons on Channel 4 News as well as the TV show he did with Richard Roeper on PBS.  And the icing on the cake was that Susan Lucci was sitting two seats down from me. It is no secret that I am a huge fan of Susan and of ALL MY CHILDREN, so I felt especially privileged. However, it was getting to hear the fascinating stories that Jeffrey Lyons told about some of the celebrities that his father knew that really made my night.  Leonard Lyons knew everyone from Orson Welles to Marilyn Monroe.  I was lucky enough to snag a copy of his book STORIES MY FATHER TOLD ME, and to give him a copy of my book SCANDALOUS WOMEN.

I managed to reconnect with an old friend an fellow author Jennifer Belle who runs a fabulous writer's workshop in New York that I hope to get back to.  I have a historical fiction novel that I have been working on, but I really need a weekly workshop to get it kicked into the shape that I know it needs to be in, before I hand it in to my agent.  Alec Baldwin was there, he stopped by to say hello to Jeffrey Lyons, so that was a squealworthy moment. My friend Mala did triple duty as wine bearer, official tweeter, as well as photographer. The food was fabulous, all donated by local restaurants, and I had a delicious glass of rose wine from a Long Island winery.

My one regret was that I didn't really get a chance to meet the other authors, nor was I invited to attend one of the author dinners that they held that night after the event. Since I don't know anyone at the library, nor am I a big enough name, I wasn't included.  My only quibble with the event was that not one of the organizers greeted the authors as they arrived.  When I arrived at the library, I was told rather rudely by a gentleman to just 'go in the back' to the tent. I found that kind of appalling. Nor did I get a lovely Authors Night bag that some of the other authors seemed to have.

Still it was a lovely evening, and I felt privileged to be apart of it. I hope that as my writing career continues, that I get another chance to be part of this lovely event.
Authors Night East Hampton

Lorraine said…
I read your book and enjoyed it very much... as I read it I was laughing out loud and my 11 year old son kept asking me why I was laughing.
The most amusing bio was Lola Montez, but the bios of Camille Claudel and Zelda Fitzgerald were very tragic and sad.
Love,
Lorraine
August 15, 2011 at 12:01 PM