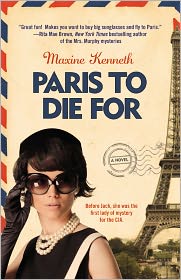 Hard to believe but this marks my 400th post and to celebrate I'm giving away a copy of the delicious new spy mystery PARIS TO DIE FOR, featuring the one and only Jacqueline Bouvier as the sleuth! Truthfully when I saw this book in my local Barnes and Noble (on Jackie's birthday no less) I thought "Jackie Kennedy as a sleuth, get out of here."  But there was something about the Audrey Hepburnesque cover that drew me in, and I bought it.  I'm very glad that I did because this was a a rollicking good novel, with fun cameos by the Duke and Duchess of Windsor, Francois Truffaut, Ian Fleming, and Audrey Hepburn herself!

This isn't James Bond or even John Le Carre, this is light espionage novel with loads of thrills that will keep the reader on the edge of his/her seat.  Yes, the book bogs down a little as one of the characters spends way too much time revealing his backstory, but the chemistry between Jacques and Jackie (too cute) is palpable. The authors have clearly done their homework, because they've captured Jackie's personality perfectly, at least from all the biographies that I have read about the former First Lady.  Since Jackie was always so mysterious, it's not too much of a leap of faith to believe that she was secretly working for the CIA. I look forward to the next book in the series HAVANA TO DIE FOR.

Inspired by an actual letter in the John F. Kennedy Library written by Jackie and revealing her job offer from the newly formed CIA

Young Jacqueline Bouvier's first CIA assignment was supposed to be simple: Meet with a high-ranking Russian while he's in Paris and help him defect. But when the Comrade ends up dead, and Jackie-in her black satin peep-toe stiletto heels-barely escapes his killer, it's time to get some assistance. Enter Jacques Rivage, a French photographer and freelance CIA agent who seems too brash and carefree to grapple with spies, though he's all too able to make Jackie's heart skip a beat.


Together the two infiltrate 1951 high society in the City of Lights, rubbing shoulders with the likes of the Duchess of Windsor, Audrey Hepburn, and Evelyn Waugh. Jackie, no longer a pampered debutante, draws on her quick intelligence, equestrian skills, and even her Chanel No. 5 atomizer as a weapon to stay alive in the shadowy world of international intrigue-and to keep her date with a certain up-and-coming, young Congressman from Massachusetts . . . .

Maxine Kenneth is the writing team of Maxine Schnall and Kenneth Salikof.


Ken Salikof is a reviewer for Publishers Weekly, an award-winning screenwriter, and an independent book editor. Ken has sold scripts to New World Cinema, HBO, Nickelodeon, and several independent producers and has edited many bestselling novels. His blog, Ken Salikof's Cinema Esoterica, can be found at http://kss2361.blogspot.com/.

Maxine Schnall is the author of six non-fiction books and one novel, including What Doesn't Kill You Makes You Stronger (Da Capo, 2003); a Pulitzer Prize nominee (Limits: A Search for New Values, Clarkson Potter, 1982); a former contributing editor with Woman's Day and CBS radio talk show host; and a popular media personality with six appearances on Oprah. Please visit her website at maxineschnall.com.

One lucky winner will receive a copy of the book PARIS TO DIE FOR. Here are the rules for the giveaway. This giveaway is open solely to my American readers! The contest runs from today through Monday, August 29th:

Lauren said…
This book sounds like it's right up my alley...love Audrey Hepburn, love Jackie Kennedy, love mysteries!
Please enter me into the drawing, por favor.

Carrie at In the Hammock Blog said…
How interesting!! I had seen this cover and thought it was adorable, but i had no idea it was jackie o! thank you for the contest!

Anonymous said…
I love the cover, almost as much as I love Paris! Mystery, Paris, and Jackie - what a delightful combination! I've had Scandalous Women on my Stringing Beads blogroll for ages. Love your blog.

Beth Yarnall said…
Oh this sounds fun! Please include me in the drawing. beth at bethyarnall dot com
August 25, 2011 at 4:32 PM

Michelle said…
This looks great. Please enter me. I am a follower.

Anonymous said…
I just stumble at Your blog, and it looks fabulous!! Count me as a follower from now on.
And the book look like something I would love to read:)

Arabella Stokes said…
Oh, this sounds wonderful! Glad they didn't make her a vampire slayer - she would have been a wonderful spy!
September 17, 2011 at 2:58 PM