Scandalous Book of the Month: The Churchills in Love and War 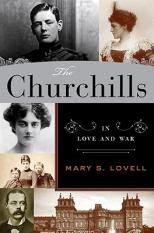 Title:  THE CHURCHILLS IN LOVE AND WAR
Author:  Mary S. Lovell
Hardcover: 624 pages
Publisher: W. W. Norton & Company; 1St Edition edition
Pub Date:  May 9, 2011
Description:  Of all Britain’s great families perhaps none has been so overshadowed by the force of one member’s personality as the Churchills. And yet in this vivid and brilliant tale of the dynasty – of which Gladstone remarked, ‘There never was a Churchill from John of Marlborough down who had either morals or principles’– theirs turns out to be a narrative of epic breadth and drama.


From the First Duke of Marlborough – soldier of genius, restless empire-builder and cuckolder of Charles II – onwards, the Churchills have been politicians, gamblers and profligates, heroes and womanisers. The family continued to flourish in the nineteenth and twentieth-century, achieving power and influence in both Britain and America, helped by marriages to the ravishing and wealthy New York society beauties Jennie Jerome and Consuelo Vanderbilt. Mary S Lovell tells a gripping story of momentous times that include the death of Queen Victoria, two world wars, the Wall St Crash and Great Depression, Women’s Emancipation, and beyond. She charts triumphant political and military campaigns; the construction of great houses; quiet, domestic tragedies; disastrous marriages – ending in venereal disease, guns by the bedside and papal annulment – including those of Winston’s children; and profoundly happy ones such as his own to Clementine Hozier.


The Churchills is a richly layered portrait of an extraordinary set of men and women – grandly ambitious, regularly impecunious, impulsive, arrogant and brave. And towering above the Churchill clan is the figure of Winston - his failures and his triumphs shown in a new and revealing context - but ultimately our ‘greatest Briton’ .

I had the chance to hear Mary S. Lovell speak two weeks ago in New York at Scandinavia House thanks to the Royal Oak Foundation.  Long an admirer of her biographies, it was wonderful to hear her talk about a book that she has such passion for.  She took us through a quick tour of the Churchills focusing mainly (as does the book) on Randolph, Winston and his descendents. Afterwards, I was lucky enough to have her sign a copy of the book. I also got to tell her how much I've enjoyed her books on Amelia Earhart, Jane Digby and The Mitfords, all of which I have used in my research. Afterwards at the reception, I had a lovely chat with a friend of hers, who mentioned that Lovell's book on WWII spy Betty Pack had never been published in the UK.  Apparently because of classified information about the spy.

The book is huge, over 600 pages, so I've been taking short dips between the pages. It's a hard book to put down, particularly the sections on the family patriarch, John Churchill, the 1st Duke of Marlborough. I've been to Blenheim Palace, the seat of the Marlboroughs, and also to the Cabinet War Rooms, but I still haven't been to Chartwell, which is on my list of things to do the next time, I'm in England.

For lovers of English history, I can't highly recommend this book enough.
Book of the Month Mary S. Lovell

The Court Jeweller said…
Okay, this sounds great -- I've been fascinated by Consuelo Vanderbilt and her counterparts ever since I read "The Buccaneers" by Edith Wharton. The American heiresses who married into the British aristocracy were a really interesting bunch!
June 8, 2011 at 9:56 PM