While researching the lives of both Jane Digby and Lola Montez for my book SCANDALOUS WOMEN, I discovered that they had two things in common:  they both were both mistresses of Ludwig I of Bavaria and both had their portraits included in his Gallery of Beauties. 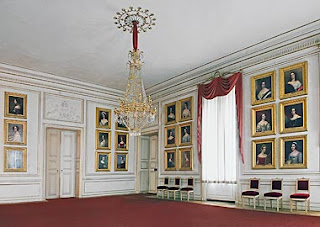 The Gallery of Beauties is a collection of 36 portraits of some of the most beautiful women from Munich's nobility and middle classes. They were painted between 1827 and 1850, mainly by Joseph Karl Stieler who was appointed the court painter in 1820.  Ludwig gathered the portraits in the south pavilion of the Nymphenburg Palace in Munich.  The gold-and-white room with its stucco-work sopraportas was originally used as a small dining room. It was then redesigned by Andreas Gärtner, father of the architect Friedrich von Gärtner. 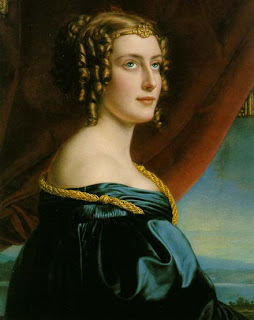 This is a portrait of Jane Digby, Lady Ellenborough (1807 - 1881) as she was then, painted around 1831.  Jane ended up in Munich after the end of a love affair with the handsome Austrian statesman Felix Schwarzenberg. Jane had left her husband and son for Schwarzenberg, eventually bearing him a daughter before he basically abandoned her. While living in Munich, she met her second husband, Karl Von Veningen-Ulner by whom she had two children. But before she married Karl (on the rebound), and she and King Ludwig struck up a brief love affair. 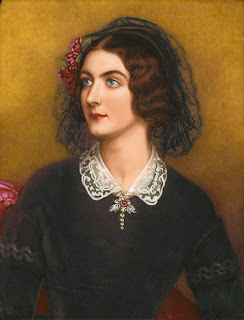 Ah, Lola Montez (1821-1861) who will be forever linked with King Ludwig in the annals of history. You'll have to buy SCANDALOUS WOMEN to read more about their affair, but by the time Lola left Bavaria (unwillingly), she had caused riots and poor Ludwig was forced to abdicate his throne.  This portrait by was painted in 1847, when Lola was at the height of her beauty.

Clink here for a panoramic view of the room.
Jane Digby Lola Montez Ludwig I

Sarah Johnson said…
I went to Germany for vacation in 2009 and visited Nymphenburg Palace, knowing nothing of its history or the beauty gallery, so I was astonished (in a good way) to see it there. Once I took a closer look, I recognized several of the portraits from books I'd read. The actual room is quite a bit smaller than the photo above makes it appear. And all (well, most) of the women depicted are truly gorgeous. There's a souvenir book, King Ludwig I's Beauty Gallery, that has reproductions of each of them and background on the women themselves. Fascinating - many, including the two above, are worthy subjects for novels.
May 18, 2011 at 11:12 PM

Elizabeth Kerri Mahon said…
How lucky Sarah! I would love to go to Germany to see the Gallery of Beauty as well as whatever castles are left from Ludwig I and Ludwig II's day. I wonder if I could order the souvenir book online?
May 19, 2011 at 10:45 AM

Sarah Johnson said…
I bought the book online at Amazon after I got home since the English version was sold out in their gift shop. It's definitely worth getting! The palace is extremely impressive; the interior is gorgeous, and grounds go on and on.
May 19, 2011 at 6:10 PM

Cheryl Ciucevich said…
Thanks for this great information. I remember hearing about the gallery, but I have never seen any images of it. I am definitely interested in getting a copy of the souvenir book! I'be just been reading about Lola--what an incredible story.
June 4, 2011 at 1:13 PM

Tori V. Martinez said…
Wonderful! I love portraits and this is a fascinating story. Must remember to visit on my next trip. Thank you for sharing this.
June 6, 2011 at 9:18 PM