Scandalous Women welcomes Sarah Bower, author of SINS OF THE HOUSE OF BORGIA 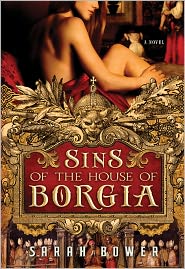 Scandalous Women is pleased to welcome historical fiction author Sarah Bower to the blog. Sarah is the author of the new novel SINS OF THE HOUSE OF BORGIA, which was published by Sourcebooks Landmark earlier this month.  What perfect timing with Showtimes new series The Borgias premiering next month. SINS OF THE HOUSE OF BORGIA is one of the best historical fiction novels that I've read this year. It is a meaty character study of the Borgia's seen through the eyes of an outsider, a young jewish woman named Esther who converts to Christianity. Here are what the critics are saying:

The sheer grandeur of the papal and Ferrara courts, and the spectacle of the Borgia and Ferrara siblings' rivalries and revenges form a glittering take on one of the most notorious families of the Italian Renaissance. (Publishers Weekly )


Bower brilliantly merges history with politics and convincing characters to draw readers into a lush and colorful tapestry of Renaissance life... This powerful piece of fiction ranks with some of the finest of the genre. 4 1/2 Stars, Top Pick of the Month


When I heard you had kindly invited me to guest on your blog, I naturally took a look at it and your headline quote from Laurel Thatcher Ulrich that ‘well behaved women don’t make history’ set me thinking about the two women who play central roles in my new novel, SINS OF THE HOUSE OF BORGIA. Violante, the narrator, is a largely fictional character, though she was inspired by a real lady-in-waiting to Lucrezia Borgia who is described as a conversa, a converted Jewess. Lucrezia herself is, of course, a major historical figure, and one notorious for her bad behaviour, although whether or not this made history is open to question and depends on how you define ‘making history’.

There are those whose actions directly affect the course of history, for example Lucrezia’s contemporary, Caterina Sforza. From the time of her first marriage, Caterina was surrounded by ineffectual men, but she didn’t let them keep her down, taking up the command of her own troops in defence of her cities of Imola and Forli against a series of attackers, including Lucrezia’s dangerous brother, Cesare. She held out against Cesare longer than any others on whose states he had designs; even when he threatened to kill her children, who were in his ‘protective custody’, she responded by climbing on to her battlements, hiking her skirts up to her waist and shouting at the much younger and possibly disconcerted Cesare that he could go right ahead as she had the wherewithal to make more children. (He didn’t, you will be relieved to hear but did, briefly, become her lover. No children ensued.) Defiant to the last, she later attempted to poison Cesare and Lucrezia’s father, Pope Alexander VI, by sending him a letter which had been laid against the body of a plague victim in order to impregnate it with plague bacilli. The attempt was discovered and Caterina was exiled to Florence.

For others, however, like Violante and Lucrezia herself, defying convention is more a matter of survival, and it is that survival which alters history’s course. Violante’s history, in my novel, stands for that of many thousands of Spanish Jews who chose to convert to Christianity rather than lose everything when Ferdinand and Isabella expelled the Jews from Spain in 1492. Perhaps, to us, this looks like a cowardly compromise, but that is both to underestimate the depth of hostility to the Jews in the Catholic Europe of the Middle Ages and the Renaissance, and also to misunderstand the nature of many of these conversions. Many of the conversi paid only lip service to their adopted religion, and kept up their Jewish practices in secret. So deep did this compromise run that, when I was researching SINS OF THE HOUSE OF BORGIA, I spoke to people of Sephardic descent who had been brought up as Roman Catholics yet observed customs such as lighting candles on Friday night, without knowing why they did this until they discovered their families’ origins in the Spanish Jewish diaspora. The notorious Spanish Inquisition was originally established in order to root out these ‘fake’ conversions, even though its remit ran much wider in later years.

The women who presided over converso households were ‘behaving badly’ whichever way you look at it. On the one hand, they had publicly renounced their faith and ethnicity. On the other, they were secretly upholding traditions which were against the law. Yet, without their courage and ingenuity in navigating a course between the demands of the Christian state and their traditional religious and cultural observance, the Sephardic culture, with its Ladino music and glorious cuisine, would have been lost to us and our lives today would have been the poorer for it.

With her third husband, Alfonso d’Este, Lucrezia Borgia had five children who lived to adulthood, including Cardinal Ippolito d’Este II, the architect of the great Villa d’Este and its gardens in Tivoli, now a UNESCO World Heritage Site. Alfonso and Lucrezia were, if not in love, contentedly married for seventeen years.

When her father died suddenly in 1503, and Cesare, himself dangerously ill at the time, lost his powerbase in the Romagna and was sent to Spain to answer charges of murder, Lucrezia’s own position was precarious. As she knew only too well, inconvenient spouses could be disposed of in a variety of ways, from divorce to murder to execution for adultery, yet, after a famously misspent youth, she ensured her survival, and her contribution to history, by behaving well. By sheer force of will, she transformed herself from the bastard daughter of a Pope with a reputation of her own for sexual depravity, into a revered and respected duchess.

Visiting Ferrara during my research, I was struck by the contrast between the Lucrezia of legend, of Victor Hugo’s play and Donizetti’s opera, and the plump, motherly woman whose image, accompanied by her children, is everywhere in that city. In Ferrara she is remembered as a devoted wife and mother, a distinguished patron of, among others, Ariosto and Pietro Bembo, and as a gallant defender of her adopted home from an army led by Pope Julius II during the War of the League of Cambrai. She helped to organise troops and artillery, and at one stage pawned her jewellery in order to purchase ammunition for the city’s cannon. On many occasions she was left in charge of Ferrara while her husband was away on business in Venice and France, and gained a reputation as an efficient administrator and a wise and compassionate dispenser of justice.

What sets Lucrezia apart from well behaved women who fail to leave their mark on history is the fact that her conduct was not, it seems to me, determined by subservience to her husband but by her shrewd political intelligence and the courage she displayed in carrying on when she had lost everyone she loved. The Borgias were not one of the great traditional Roman dynasties such as the Orsini or the Visconti. They were minor Catalan gentry who emigrated to Italy, rose rapidly and fell just as fast. They were self-made people and Lucrezia was, perhaps, the most successfully self-made of all. Cesare proved unable to reinvent himself and died as he had lived, recklessly and violently, but his sister was a woman for all seasons, whose capacity to adapt and survive helped her to leave a lasting mark on posterity.

Thanks so much for stopping by Sarah.  You can find out more about Sarah at www.sarahbower.co.uk or purchase SINS OF THE HOUSE OF BORGIA at Amazon.com or BN.com
Lucrezia Borgia Sarah Bower

Amber at The Musings of ALMYBNENR said…
Thanks so much for the interview! I found it really enjoyable and informative. I'm about halfway through the Sins of Borgia right now and it's fabulous.
March 25, 2011 at 8:16 PM

Elizabeth Kerri Mahon said…
I'm so glad that you stopped by. I couldn't put it down when I was reading it. It was just the palate cleanser that I needed after the all Tudor, all the time books I've been reading.
March 26, 2011 at 12:38 PM