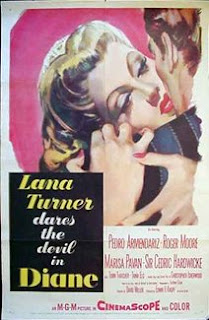 Diane (1956)
Produced by: MGM
Directed by:  David Miller
Screenplay: Christopher Isherwood based on a story by John Erskine.

Synopsis (from Wikipedia): The action is set in 16th century France. Diane de Poitiers (Lana Turner), mistress of Prince Henri (Roger Moore), the future King Henry II, rises to a position of absolute power through her manipulation of the men in her life. Those men include King Francis I (Pedro Armendariz) and Diane's husband, the Count de Brèze (Torin Thatcher). Diane's principal foe is the scheming Catherine de' Medici (Marisa Pavan), who for the first time in her life has met her match.

My thoughts:  God bless TCM! I had never heard of this movie before I saw it in the March program guide. As soon as I saw that Lana Turner was playing Diane de Poitiers, I knew that I had to watch it. I had no idea what I was going to be getting.  The film was produced by MGM, known for its lavish musicals, not really for historical dramas.  And Lana Turner wasn't exactly known for her acting skills during her Hollywood career.  Still I was intrigued a) by the idea that anyone in Hollywood had heard of Diane de Poitiers and b) that Christopher Isherwood wrote the screenplay.  For those who don't know, the musical Cabaret is based on short stories that Isherwood wrote about his time in Berlin between the wars.

Don't be fooled by the synopsis from Wikipedia, Diane manipulates no one in this movie.  Catherine de Medici yes, but not Diane. The film is somewhat historically accurate although it condenses Henri and Diane's 25 year affair into just a few years.  When Diane meets Henri in the film, he's an adult.  In reality, Henri was 12 and just been returned to France after being held hostage in Italy.  Francis I wanted Diane to teach Henri how to be a Prince exactly as she does in the film, although I'm pretty sure that she wasn't teaching him French.  The film opens with Diane's husband the Comte de Breze being interested for his involvement with Charles de Bourbon (which everyone in the film pronounces like the whiskey). Historically, it was Diane's father who was arrested for his involvement, and Diane pleaded with Francis I for his release.  The film Diane has no children, while the historical Diane had two children. The Dauphin in the film actually becomes King after Francis I dies for all of about 5 minutes before he dies of suspected poisoning. Historically the Dauphin was suspected of being poisoned, but he died when he was 18, long before Francis I.

I wouldn't say the Diane in this film rises to absolute power either.  Because the movie was made in the 1950's, the affair between Henri and Diane is particulary unsexy.  They declare their love, she runs off after he marries Catherine de Medici, is brought back to court when Henri becomes King, but apart from one scene in her bedroom where she's in a nightgown and Henri is fully clothed (both feet on the floor), the audience has to infer that she and Henri are going at it like bunnies. The film also skips 7 years, during which Catherine de Medici bares 3 sons (no mention of the other 7 children she gave birth too) and then we come to the climatic joust where Henri is killed.  In this film, Catherine's family, the Medici's plot Henri's death, to avenge Catherine for the way he has been treating her, and for the decision to make a treaty with Savoy. Because the film is only about 2 hours, the audience really doesn't get much of a sense of how Diane influenced Henri, the fact that he gave her the magnificent chateau of Chenonceau is skipped over, as well as their monogram that was everywhere.  There is a moment at the end where Henri makes her Queen of the Lists for the joust, and she chastizes him for it, where you get a minute sense of how powerful she might have been, but its quickly glossed over.

What can one say about the acting?  Well, Lana Turner looked lovely in her costmes and that's about it. Roger Moore, wow, I had no idea that he was making movies in the 1950's in Hollywood.  Seriously, the former Saint/James Bond was quite dishy when he was younger. He looks gorgeous in this film, and certainly they make sure to show off his legs as much as possible. His acting? Well he's better than Lana Turner and the actor who plays Francis I who recites all his dialogue as if reading it off of cue cards.  The most intriguing character in the film is of course Catherine de Medici played by Marisa Pavan, who is much prettier than the real Catherine but perfectly captures the Italian princess who falls in love with Henri and suffers because of his love for Diane.  Catherine has an astrologer who predicts that she will have 3 sons who will become King and that she will rule through them, and that Henri will be killed during a joust (the information is kept from her).  The scene where she finds out that she will be the mother of Kings is magnificent as is the scene where she spies on Henri and Diane and learns of their love.  A more painful scene is at the end where her son (Francis II) is happy to see his 'Aunt Diane' and wants to know when she is coming back.  The look of anguish and jealousy on Pavan's face is priceless.

The chances of there being another mini-series about Diane seems to be slim to none unless the French get cracking, so for the moment all we historical fiction lovers have is this movie.
Catherine de Medici Diane de Poitiers Henri II