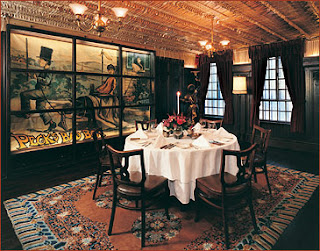 In New York, you have to take your history where you can find it.  The city has changed so much over it's 400 years of existence and much has been lost, particularly when it comes to Scandalous Women.  The building where Evelyn Nesbit spent on Stanford White's red velvet swing collapsed a few years ago, the original Madison Square Garden no longer exists, and the Vanderbilt and Astor mansions have long since been torn down for high rise buildings. However, one thing you can do is eat scandalously. The following eateries pay homage to some of the Scandalous Women that I have written about in the past.

The photo above is the Lillie Langtry room at Keen's Steakhouse which is located a stone's throw away from Macy's Department store.  Keen's has been around since 1885, which makes it one of the oldest restaurants in NYC and one of the few that still exist from the 19th century.  Lillie Langtry was the first woman customer at Keen's and in honor of her, they named this absolutely lovely room after her.  I don't eat meat but I still love to go to Keen's to soak in the historic atmosphere.  If you have dinner there, take a note of the pipes on the ceiling.

Another restaurant also pays home to Lillie Langtry, appropriately enough named Lillie's near Union Square.  I just happened to stumble upon this place one day, and now it's one of my favorite place's in the city.  It has a distinctly Victorian feeling and I love that they have a copy of Millais' famous painting of Lillie. The food is Irish-American which is funny considering that Lillie was from the island of Jersey and her heritage was more English and French than Irish, although her husband Edward Langtry was Irish.  Truthfully the food is not amazing, but the appetizers are great, and the restaurant serves wine from the winery that Lillie used to own in California.

Of course, one cannot write a post about eating scandalously in New York without mentioning Chez Josephine. This restaurant opened 25 years ago on 42nd Street between 9th and 10th Avenues, began when it was no man's land. People thought Jean-Claude Baker was crazy but its exactly the type of thing that Josephine Baker would have done.  The restaurant is an homage not just to Josephine Baker but also to the club that she opened in Paris in the 1930's.  I have yet to go there but I plan on having dinner there sometime in the future, bearing a copy of my book!

The newest eatery on the block is Mary Queen of Scots.   The restaurant is not only named after the Queen of that name but also after one of the owners whose name is Mary (of course) and she's from Scotland.  The restaurant, located on the lower East Side, has only been open a few months but it's already creating buzz.  I had dinner there last Wednesday and the food was sublime, particularly the fried Brussell Sprouts.  The food, befitting Mary Queen of Scots is French/Scottish and the decor is simply beautiful.  Take particular notice of the drinks menu which has drinks named after Darnley, Walsingham and the Auld Alliance.
Eating Scandalously Josephine Baker Lillie Langtry Mary Queen of Scots