Book Review: A Race to Splendor by Ciji Ware 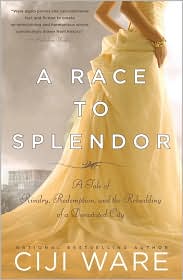 Synopsis: Inspired by female architect Julia Morgan, this is the riveting tale of a race against time to rebuild two luxury hotels after the 1906 San Francisco earthquake destroyed 400 city blocks and left 250,000 homeless. Morgan's fictional protegee Amelia Bradshaw and client J.D. Thayer will sacrifice anything to see the city they love rise from the ashes; in the process, they can't help but lose their hearts.

My thoughts:  I have a been a longtime fan of Ciji Ware's contemporary and historical fiction, so when I was offered the chance to review her first novel in ten years I jumped at the chance.  Not only was the book set in San Francisco, a city that I feel is criminally underused in historical fiction but the story is set against the aftermath of the great earthquake of 1906.  I've only been to San Francisco once, for the RWA Conference in 2008, but I've long been fascinated by the city by the bay.

Unfortunately I found myself underwhelmed by the book, despite the glowing reviews that I've read. Perhaps my expectations were just too high. The book starts out with a bang as it were as Amelia Hunter Bradshaw arrives in San Franciso after years abroad only to find out that her alcoholic gambler father has lost the famiily hotel The Bayview to James Diaz Thayer.  Amelia valiantly tries to regain the hotel but is thwarted by the legal system which is corrupt. She manages to obtain work at Julia Morgan's architecture firm but discovers that working for her friend and mentor is not what she expected.  Before too long, the reader and Amelia is jolted by the tremors of the San Francisco earthquake. For me, this was the best part of the book.  Ware's descriptions of the earthquake and the horrific fire that followed in the aftermath are wonderfully evocative as thousands of residents are left homeless by the destruction.

What follows next is a race to see who can rebuild fastest, The Fairmont Hotel (which still exists) which was due to open before the earthquake or the fictional Bay View.  Amelia's employer Julia Morgan is hired to build both hotels which means that Amelia finds herself having to help her enemy rebuild her family's legacy.  I found Amelia to be an appealing heroine. She is stubborn, optimistic, strong-willed, and independent. She's not without her flaw, she's quick to judge and seems to try to avoid confrontation if possible.  A graduate of the University of Berkeley with a degree in Engineering, Amelia has spent several years in Paris studying architecture, becoming the second woman after Julia Morgan to earn a degree.  I wanted to know more about her experiences in Europe, as well as her struggles as an architect in San Francisco.  Her relationship with Julia Morgan takes a backseat to her burgeoning romance with J.D. Thayer.

I was not quite as enamored of James Diaz Thayer as I was of Amelia.  He's a gambler who sets out deliberately to exploit the weaknesses of Amelia's father in order to gain ownership of the hotel.  He has a strained relationship with his father, but what bothered me even more was that he abandoned his mother at the age of 15, knowing that his father was emotionally as well as physically abusive to her, plying her with drugs to keep her compliant as he siphoned off her money. Yes, J.D. is remarkably free of prejudices.  Like Amelia he befriends the Chinese workers who come to help remove the rubble from his destroyed gambling club, a club he knew was put up shoddily. I just couldn't warm to him.

When the book focused on the building of the Bay View hotel, I was riveted.  Watching Amelia ply her craft was a joy.  And the depiction of the Chinese in San Francisco at the turn of the century and people like Donaldina Cameron who were working to gain them freedom from the sweatshops, brothels and opium dens was fascinating.  When the story veered in to the tentative romance between J.D. and Amelia, I was less interested. J.D. has a rival for Amelia's affections, in the doctor Angus McClure but courtship takes place offstage, we hear about Angus and Amelia having dinner and his proposals but we never really see it.

The two biggest weaknesses in the book, in my opinion, are the villains Ezra Kemp and 'Big Jim' Thayer who seemed to have wandered in from a Victorian melodrama.  Ezra Kemp in particular seems one step away from twirling his moustache and tying Amelia to the railroad tracks.  Neither villain has any redeeming qualities whatsoever.  They are both horrible human beings, who hate the Chinese and basically every ethnic group that aren't White Anglo-Saxon and Protestant, and both are lousy fathers who treat their children like commodities. Oh, and they both own brothels and opium dens too boot, exploiting the Chinese workers. Ezra Kemp pushes asides other victims of the earthquake to make his escape from the city on one of the last ferries.

The other thing that bothered me was that the book seems to rely on too many coincidences. When the hotel seems to be destroyed after a boiler explosion, J.D. manages to get his father to agree not to block his getting more funds.  When J.D. runs out money again, another miracle occurs and the funds miraculously are found.  Kemp tries to blackmail J.D., but he brushes it off as it were just another day at the office. I never really felt that Kemp was that much of a threat to J.D. or to the hotel.  His thugs seem like something out of a cartoon, twice Amelia manages to overcome a threat to her person with seeming ease. Just before the hotel opens, Amelia finds evidence that her father had managed to gain back the hotel, just in time for the grand opening.

Verdict:  Recommended. If you are looking for a historical romance set against an interesting backdrop with a heroine with an usual occupation then this book is for you.  Those readers looking for a meatier historical fiction novel will be disappointed.
Ciji Ware San Francisco earthquake