Book of the Month: The Tin Ticket 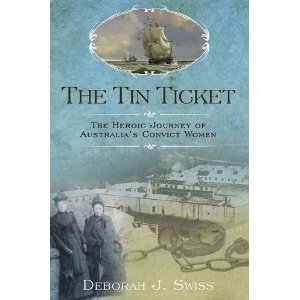 THE TIN TICKET:  The Heroic Journey of Australia's Convict Women
AUTHOR:  Deborah J. Swiss
PUBLISHER:  Berkeley Publishing
PUB DATE:  October 2010
This month's Book of the Month is THE TIN TICKET: The Heroic Journey of Australia's Convict Women.  Since March is Women's History Month, and the theme this year is Survivors, I thought it more than appropriate.  The only convict's story that I was familiar with before reading this book was Mary Bryant's, a young Cornish woman, who managed to escape the penal colony and make her way back to the UK. These are the untold stories of the women who were not able to do that.You can find out more at the author's website: http://www.deborahswiss.com/
Synopsis:  Historian Deborah J. Swiss tells the heartbreaking, horrifying, and ultimately triumphant story of the women exiled from the British Isles and forced into slavery and savagery-who created the most liberated society of their time.
Agnes McMillan and Janet Houston were convicted for shoplifting. Bridget Mulligan stole a bucket of milk; Widow Ludlow Tedder, eleven spoons. For their crimes, they would be sent not to jail, but to ships teeming with other female convicts. Tin tickets, stamped with numbers, were hung around the women's necks, and the ships set out to carry them to their new home: Van Diemen's Land, later known as Tasmania, part of the British Empire's crown jewel, Australia. Men outnumbered women nine to one there, and few "proper" citizens were interested in emigrating. The deportation of thousands of petty criminals-the vast majority nonviolent first offenders-provided a convenient solution for the government.
Crossing Shark-infested waters, some died in shipwrecks during the four-month journey, or succumbed to infections and were sent to a watery grave. Others were impregnated against their will by their captors. They arrived as nothing more than property. But incredibly, as the years passed, they managed not only to endure their privation and pain but to thrive on their own terms, breaking the chains of bondage, and forging a society that treated women as equals and led the world in women's rights.
The Tin Ticket takes us to the dawn of the nineteenth century and into the lives of Agnes McMillan, whose defiance and resilience carried her to a far more dramatic rebellion; Agnes's best friend Janet Houston, who rescued her from the Glasgow wynds and was also transported to Van Diemen's Land; Ludlow Tedder, forced to choose just one of her four children to accompany her to the other side of the world; Bridget Mulligan, who gave birth to a line of powerful women stretching to the present day. It also tells the tale of Elizabeth Gurney Fry, a Quaker reformer who touched all their lives. Ultimately, it is the story of women discarded by their homeland and forgotten by history-who, by sheer force of will, become the heart and soul of a new nation.
Book of the Month Deobrah Simms

CharmedLassie said…
This looks fascinating. Thanks for drawing it to my attention.
March 4, 2011 at 1:56 PM

Marg said…
Oh, this sounds fascinating, particularly to an Aussie reader! Adding it to my TBR list!
March 6, 2011 at 5:37 PM

Elizabeth Kerri Mahon said…
It's an aspect of history that has seriously been underserved. I've just dipped my toe into the book, but it's extremely well written, and riveting.
March 7, 2011 at 12:16 PM