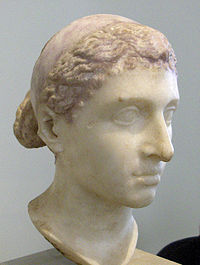 While I was researching my chapter on Cleopatra for Scandalous Women, the question of whether or not she was black came up. For centuries Cleopatra was seen as an exotic femme fatale but with the rise of interest in African-American history and the black power movement over the years, there has been a rush to claim Cleopatra as a sister. I used to argue about this with my brother constantly when I was in high school and studying ancient history. He insisted that Cleopatra had to be black because she was the Pharoah of Egypt and Egypt was in Africa. I, of course, explained to him all about Alexander the Great and how after his death, his empire was divided amongst his generals, and Ptolemy ended up with Egypt. We went around like this for days before I just gave up arguing with him. Now of course, with the announcement that Angelina Jolie might be playing the role in a film adapted from Stacey Schiff's biography, the question comes up again (the fact that Angelina Jolie is much more beautiful than the real Cleopatra never seems to come up).

Unfortunately it is impossible to prove one way or another. Her father Ptolemy XII was at least half Macedonian Greek, his mother’s origins are unknown. There was a  high degree of inbreeding amongst the Ptolemies, they were notoriously xenophobic, preferring to speak Greek and to keep Greek customs. According to the chart on Wikipedia, she only had four great-grandparents and six (out of a possible 16) great-great-grandparents. I would say that means that Cleopatra was probably at least 50% Greek Macedonian. Still at some point, they needed to inject from fresh blood into the dynasty. Cleopatra’s mother is also unknown. So it is possible that she was at least part African. Although she learned Egyptian, becoming the first Ptolomeic Pharaoh to do so, Cleopatra identified herself as being Greek, even as she took on the trappings of Egyptian culture. Certainly the coins that were minted during her lifetime show a woman who looked more Greek than she did Egyptian.

A 2009 BBC documentary, Cleopatra: Portrait of a Killer, looked at the reconstruction of a skull which could p ossibly from a sister of Cleopatra (Cleopatra had asked Mark Antony to have one of her remaining siblings, who was a threat to her throne, murdered) to show features which have similarities to both Semitic and Bantu skulls. Their conclusion was that Cleopatra could have had black African ancestry -- but it's not really conclusive. Another problem is that we think of as race means something different entirely from what it might have meant in Cleopatra's day. Are contemporary Eygptians black or are they Arab, or a melange of different races? Yes, they are African but if someone's parents were originally from Egypt does that make one African-American?

Still the question is still raised. Why does it matter? Well, Cleopatra was a powerful woman who ruled Egypt by herself for over 20 years before her death.  Books, plays, films, operas and poetry have been written about her. She has moved from being a historical figure into an iconic figure. Who wouldn't want to claim her as one of their own. Claiming Cleopatra as black, gives young black girls an example of a sister who was doing it for herself so to speak. No matter what race she was, she is mythic figure that continues to enthrall countless biographers and filmmakers to this day.

Unfotunately unless we find Cleopatra's grave or a time machine to send archeologists and historians back in time, we will never know for sure what Cleopatra's racial make-up is.
Cleopatra Warrior Queens

Unknown said…
There's also the possibility (many scholars say probability) that Cleopatra and Arsinoe had different mothers, so who knows what Cleopatra was other than Macedonian. I've read the theory that her maternal grandmother was a Syrian princess. Another theory says that her mother may have been a native Egyptian, presumably an upper-class Hellenized one. Since Egypt had a mixture of races at the time, it's possible that she could have had some Black African ancestry through her mother. If her mummy is ever found, it will be absolutely fascinating to see what her ancestry is and what she looked like. Whatever races she was or wasn't, she's certainly a powerful symbol for all girls of any background!
February 28, 2011 at 11:35 PM

Elizabeth Kerri Mahon said…
I agree wholeheartedly with you S.L. But the question just won't die, particularly since the people making the argument that she was black, don't seem to know the history of the region at the time that she lived. They are thinking of modern day Egypt, which as a mixture of races today, just as it did back then.
March 2, 2011 at 1:03 PM

Unknown said…
I think another problem is that they're thinking in modern-day racial terms rather than the racial identities of the ancient world. People didn't think of themselves as black or white, they thought of themselves as Egyptian or Ethiopian or Roman or Persian. And Cleopatra depicted herself as both Macedonian and Egyptian, sometimes even in the same work of art. There's a lovely little stone statue of her in the Hermitage in St. Petersburg that blends Hellenistic and Egyptian elements. I like to think of her as an Hellenistic queen of mixed ethnicity who identified herself strongly with her country of Egypt.
March 4, 2011 at 7:21 PM


Until recently, no one ever asked whether Cleopatra might have had an
African ancestor, because our surviving ancient sources identify her as
a Macedonian Greek. Her ancestors, the Ptolemies, were descended from one
of Alexander's generals. After Alexander's death in 323 B. C., these generals
divided up among themselves the territory in the Mediterranean that Alexander
had conquered. The name Cleopatra was one of the names traditionally given
to women in the royal family; officially our Cleopatra (69-30 BC) was Cleopatra
VII, the daughter of Ptolemy XII and his sister. Cleopatra VII herself
followed the family practice of marrying within the family. She married
her two brothers (Ptolemy XIII and XIV) in succession (after the first
died in suspicious circumstances, she had the second murdered). Her first
language was Greek; but she was also the first member of the Ptolemaic
line who was able to speak Egyptian. She also wore Egyptian dress, and
was shown in art in the dress of the goddess Isis. She chose to portray
herself as an Egyptian not because she was Egyptian, but because she was
ambitious to stay in power. In her surviving portraits on coins and in
sculpture she appears to be impressive rather than beautiful, Mediterranean
in appearance, with straight hair and a hooked nose. Of course these portraits
on metal and stone give no indication of the color of her skin.

The only possibility that she might not have been a full-blooded Macedonian
Greek arises from the fact that we do not know the precise identity of
one member of her family tree. We do not know who her grandmother was on
her father's side. Her grandmother was the mistress (not the wife) of her
grandfather, Ptolemy IX. Because nothing is known about this person, the
assumption has always been that she was a Macedonian Greek, like the other
members of Ptolemy's court. Like other Greeks, the Ptolemies were wary
of foreigners. They kept themselves apart from the native population, with
brothers usually marrying sisters, or uncles marrying nieces, or in one
case a father marrying his daughter (Ptolemy IX and Cleopatra Berenice
III). Because the Ptolemies seemed to prefer to marry among themselves,
even incestuously, it has always been assumed that Cleopatra's grandmother
was closely connected with the family. If she had been a foreigner, one
of the Roman writers of the time would have mentioned it in their invectives
against Cleopatra as an enemy of the Roman state. These writers were supporters
of Octavian (later known as Augustus) who defeated Cleopatra's forces in
the battle of Actium in 31 B.C.