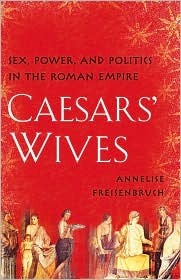 Synopsis: In scandals and power struggles obscured by time and legend, the wives, mistresses, mothers, sisters, and daughters of the Caesars have been popularly characterized as heartless murderers, shameless adulteresses, and conniving politicians in the high dramas of the Roman court. Yet little has been known about who they really were and their true roles in the history-making schemes of imperial Rome’s ruling Caesars—indeed, how they figured in the rise, decline, and fall of the empire. Now, in Caesars’ Wives: Sex, Power, and Politics in the Roman Empire, Annelise Freisenbruch pulls back the veil on these fascinating women in Rome’s power circles, giving them the chance to speak for themselves for the first time. With impeccable scholarship and arresting storytelling, Freisenbruch brings their personalities vividly to life, from notorious Livia and scandalous Julia to Christian Helena. Starting at the year 30 BC, when Cleopatra, Octavia, and Livia stand at the cusp of Rome’s change from a republic to an autocracy, Freisenbruch relates the story of Octavian and Marc Antony’s clash over the fate of the empire—an archetypal story that has inspired a thousand retellings—in a whole new light, uncovering the crucial political roles these first "first ladies" played. From there, she takes us into the lives of the women who rose to power over the next five centuries—often amid violence, speculation, and schemes—ending in the fifth century ad, with Galla Placidia, who was captured by Goth invaders (and married to one of their kings). The politics of Rome are revealed through the stories of Julia, a wisecracking daughter who disgraced her father by getting drunk in the Roman forum and having sex with strangers on the speaker’s platform; Poppea, a vain and beautiful mistress who persuaded the emperor to kill his mother so that they could marry; Domitia, a wife who had a flagrant affair with an actor before conspiring in her husband’s assassination; and Fausta, a stepmother who tried to seduce her own stepson and then engineered his execution—afterward she was boiled to death as punishment.

If you spent time like I did during the '80's watching I CLAUDIUS with Derek Jacobi and Sian Philips, or the more recent HBO miniseries ROME (which should have lasted more than two seasons frankly) then you will want to run out and buy a copy of this book. Friesenbruch details the lives of a whole host of Scandalous Roman women, not only Messalina, but also Livia and Claudius' last wife Agrippina, mother of Nero, along with a host of other wives that have been lost to history until now. I found this book fascinating, dipping my toes into its pages, over the past several months, getting to know these women.  There's also even a little bit about Fulvia, one of Marc Antony's wives, who is an incredibly fascinating character. The author, Annelise Freisenbruch is a Latin teacher at a middle school in Dorset. Frankly if I had had this book when I was taking Latin in junior high and high school I might actually have enjoyed it more!  The book is much more than just a biography of these women, it is only a social history of what life was like for upper class Roman women during the years of the Republic and the Empire. I'm frankly surprised that no one had thought to write about these women before, but I'm very glad that Freisenbruch did.
Book of the Month Julius Caesar Messalina

Elizabeth Kerri Mahon said…
Interesting that the UK was THE FIRST LADIES OF ROME. I think that both titles are prety awesome. And the book is great. I highly recommend it to everyone.
February 2, 2011 at 11:52 AM

Theresa Bruno said…
I'm salivating. This sounds like a rare gem. Not much is written about the wives of powerful men.
February 3, 2011 at 1:10 PM