Was Elizabeth I A Man? 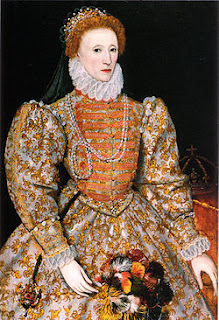 Okay, this was a new one on me, the idea that Queen Elizabeth I might actually be a man.  I had actually never heard this rumor before until I watched The National Geographic Channel's special THE SECRETS OF THE VIRGIN QUEEN.  Guess what? There were no real secrets in this special, just a bunch of rehashed stuff about whether or not she and Dudley ever had a child, and why she never married.  The only new information (at least for me) was the story of the Bisley Boy.

According to THE SECRETS OF THE VIRGIN QUEEN, Elizabeth (then a princess) had died aged 10 while staying at Berkeley Castle, in  Gloucestershire (the same castle where Edward II was murdered). Her minders, terrified of the retribution of her father, Henry VIII, made a substitution. A lookalike boy from the nearby village of Bisley was put in her place and sworn to secrecy. This legend 'explained' why Elizabeth never married or had children. In fact, the tale was apparently invented as a joke by a local clergyman in the 19th century.  Bram Stoker picked it up and wrote about the story in his book about Famous Imposters.

The show contained interviews with the residents of Bisley who apparently do consider the idea that Elizabeth I was actually a dude.  One more cynical resident admitted that it was good for tourism.  They tried to pass it off by suggesting that she wore all those ruffs to hide her Adam's Apple, and that the white make-up she wore was to cover up her stubble. The one valid point that was brought up was the fact that Elizabeth I didn't want an autopsy of her body after her death. Although that could have been because she didn't want anyone cutting her up, or she wanted to conceal the fact that she wasn't actually a virgin, which is more likely.

This is my question, given the fact that Elizabeth spent her life surrounded by women who dressed her and undressed her everday, and the doctors who examined during her lifetime, how could she conceal that she was a man? I think people would have noticed that she had a penis! Especially since she did apparently get her period, if not regularly, then often enough. Plus even though Henry might have been a neglectful father, I think he would have noticed that his daughter now had an Adam's apple!

Has anyone ever heard this story before?
Queen Elizabeth I The Bisley Boy

Yuri said…
wow, i just heard this from you! very intriguing story, whether it's true or not (but it's more like a false - at least I hope so ;p).

Thanks for sharing this.

CharmedLassie said…
What Reina said! However, it's nice to know what odder people think sometimes so thanks for sharing.
January 30, 2011 at 1:54 PM

Lisa J Yarde said…
I watched this show and the preceding one on the mania of Henry VIII. Interesting subjects, if not too revealing; e.g. Henry was a mean bastard because he was in continual pain.
January 30, 2011 at 5:33 PM

Justine Valinotti said…
I've heard the story before and never believed it. However, people in the time of her successor said, "Elizabeth was the King; James is the Queen."
January 30, 2011 at 9:03 PM

Undine said…
I had heard that story some years back, but I don't think anyone takes it too seriously.

There were contemporary stories that Elizabeth was somehow "not normal" physically, which has led to serious speculation that she might have been a hermaphrodite! Of course, that can't be proved or disproved now.
January 31, 2011 at 7:44 AM

socialitedreams said…
lol! wow...i heard that she may have been the "man" behind william shakespeare, as in, probably wrote his pieces and used him as a "beard" so to speak...but actually a man??? never heard that one!
January 31, 2011 at 10:58 AM

Elizabeth Kerri Mahon said…
I had never heard the story either, and I've read a great deal about Elizabeth I. I agree that once again it's another instance of trying to explain away a powerful woman. "Of course she must have been a man, how else could she reign successfully" Elizabeth I is the only English Queen to have ruled without a consort so therefore she must have been a dude.

Undine, they talked about whether or not she might have been a hermaphrodite in the program.

Socialitedreams, I have never heard that Elizabeth wrote Shakespeare's plays before. LOL! When would she have found the time?

Lisa, I actually enjoyed the program on Henry VIII and Edward, the Nazi King more than the program on Elizabeth but I'm glad that I watched it. It was a great evening of TV for history buffs.
January 31, 2011 at 12:05 PM

Leanna Renee Hieber said…
*sigh* Is it just my feminism hackles going up that just because she was a strong woman and queen means some assume she had to be a dude?

I've never heard this before and think it's a load of bull, but kind of funny.

And yes, in the play The Bard of Avon I recall that there was some theorizing by scholars that Elizabeth wrote a few of Will's works, which I also this is just plain funny. :)

Elizabeth Kerri Mahon said…
What got me about the story Leanna, was that they expected no one would know the difference or wonder why all of a sudden a royal princess had to shave once a week! Mark Twain's story of The Prince & The Pauper reminds of me of this legend. Only this one would be The Princess & The Pauper :)
February 1, 2011 at 9:48 AM

dave hambidge said…
Never heard of that one; which I would put straight into the creative bollocks box...
February 1, 2011 at 11:05 AM

Elizabeth Kerri Mahon said…
What makes me laugh the most about tis is that it would serve Robert Dudley right if after all his wooing, the object of his affection turned out to be a man!

Also in terms of her also being Shakespeare, I kind of like that idea. Elizbeth I: Ruler by Day, Playwright by Night. I suppose she must have left those manuscripts that were performed after her death somewhere. It would sort of explain Pericles and Cymbeline.
February 1, 2011 at 12:59 PM

Unknown said…
I watched this documentary too. I was disappointed that they spent so much time on the silly legend of Elizabeth being a man, but sensationalism sells. I'd hoped for a psychological profile that thoughtfully considered the reasons behind Elizabeth's refusal to marry.
February 3, 2011 at 12:36 AM

Elizabeth Kerri Mahon said…
S.L. I had high hopes for this documentary too, particularly since it had the intriguing title of 'Secrets of the Virgin Queen.' I could have saved myself the trouble and just picked up my copy of Elizabeth's Women instead.
February 4, 2011 at 12:42 PM

Carrie K said…
Ah, no wonder she could govern so well. She was actually a man! Thank heaven, order has been restored. /sarcasm.

Elizabeth Kerri Mahon said…
Hi Carrie, welcome to Scandalous Women. I've never heard this story before either, which just goes to show you that there is always something that you can learn, even if you think that you know everything about a subject.
February 11, 2011 at 12:52 PM

Claudine said…
i could believe she was a hermaphodite.
i could certainly believe she had an eating disorder, and psychological reasonings behind her desire to never marry.
what i can not believe is that she was, in fact, a man. ridiculous.
February 17, 2011 at 3:37 PM