Scoundrel of the Month: Robert Burns 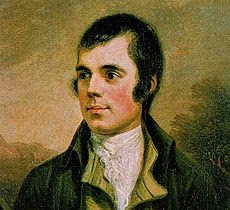 This month starts a new feature on Scandalous Women, the Scoundrel of the Month. First up is the Scottish poet and champion shagger of Scotland, Robert Burns.


Robert Burns is pretty much the patron saint of Scotland (along with St. Andrew and Sean Connery, professional Scotsman) or near enough. He's known by many names, Rabbie Burns, Scotland's favorite son, The Ploughman Poet amongst others. A poet and chick magnet (what is with women and poets?), Robert Burns was born on January 25, 1759 two miles south of Ayr, in Alloway, South Ayrshire Scotland, the eldest of 7 children. He grew up poor on a farm, and the manual labor left him with a premature stoop and a weakened constiution. Still he managed to get a decent education from his father who was self-educated and well read.  Young Robert learned history, reading, writing, and geography, when he managed to attend school, he added Latin, Frenchand mathematics to his knowledge. By the age of 15, his formal schooling was over, and he was the principal laborer on a farm. He also wrote his first poem, inspired by what else, a woman named Nellie Kilpatrick, entitled O, Once I Lov'd A Bonnie Lass.

His poems are written chiefly in Scottish language although he also wrote in English as well as a 'light' Scots dialect. Burns also collected folk songs from across Scotland, revising them and adapting them and preserving them for future generations. Besides writing poetry, his interests included drinking a lot of whisky and shagging many women. Apparently, he was such a dude with the ladies, that other men used to have Burns write love letters for them like Cyrano de Bergerac. Looking at the above picture you can see why so many women fell for him, he wasn't half bad looking, rather sensitive and sweet, with those puppy dog eyes. What woman could resist a man who has written a poem inspired by them? Robert's reputation with the ladies got him into a lot of trouble with the elders of the local church who considered him a bit of a reprobate.  He knocked up his mother's servant Elizabeth Paton who gave birth to his first child also named Elizabeth in 1785.  Meanwhile he had been courting another woman named Jean Armour who later became his wife.  Jean gave birth to twins but that didn't keep Burns faithful.

Although he and Jean had gone through a marriage ceremony and he signed a paper to that effect, her parents weren't happy at the idea, so Burns felt free to go a roaming! He had made plans to travel to Jamaica to take a job but couldn't afford the fare, so he spent his time courting Mary Campbell who he had met in church. He wrote more poems dedicated to Mary including The Highland Lassie, Highland Mary, and To Mary in Heaven.  Rumor has it that Burns and Mary exchanged bibles and plighted their troth over the Water of Fail. Unfortunately Mary died of Typhus in October of 1786 leaving Burns free again.

Next up Burns headed to Edinburgh where his poems were published under the title Poems, Cheifly in the Scottish Dialect. He was now a literary celebrity, invited everywhere,, hobnobbing with the glitterati as well as the aristocracy of Scottish society, impressing the young 16 year old future writer Walter Scott.  Women now doubt threw themselves at his feet, and he began a platonic affair with a married woman who was seperated named Agnes "Nancy" McLehose who he called 'Clarinda.' However Nancy wasn't quite so willing to drop her pantaloons so Burns moved on to her servant Jenny Clow who bore him a son. When Nancy sailed for Jamaica to reconcile with her husband, Burns finally returned to the ever faithful Jean Armour who bore him 9 children in total, the last born on the day that Burns died.

Although famous, he was still broke, not having such things as royalties back then. So he took a job as an exciseman (like another writer Herman Melville who was forced to toil at the Customs House in New York). He died at the rather young age of 37 of heart disease exacerbated by a life of excess and hard manual labor.

When he died, 10,000 people came to watch and pay their respects. This was back when Scotland wasn’t exactly running over with people. He was the equivalent of a modern day rock star. Can you imagine 10,000 people turning up for a poet’s death today? Every year on the anniversary of his birth, Scots celebrate Burns with a supper, where they address the haggis, and drink lots of whiskey. According to Wikipedia, in 2009 Burns was voted by the public as being the Greatest Scot. Scottish actor Gerard Butler is supposed to be playing Burns in a new movie, which is sort of fitting since he has a bit of a reputation with the ladies as well.

dave hambidge said…
Thankyou for blowing away the misty-myth around Burns! Although we spend much time in his part of Scotland, I have never "got" his work or fame. So it was akin to Cassanova then?
January 25, 2011 at 3:28 AM

Elizabeth Kerri Mahon said…
Yes, he was. Apparently there wasn't a woman in Scotland that he wasn't shagging and writing poetry about. Granted he did do alot for traditional Scottish songs but the man wore himself out.
January 25, 2011 at 1:09 PM