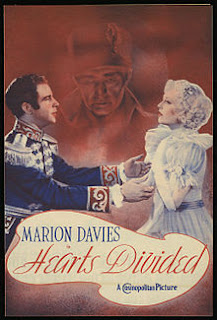 
Synopsis:  Napoleon (Claude Rains) needs money in order to continue his quest for world domination in Europe so he wants 20 million dollars for the Louisiana Territory in the United States. To help the negotiations, he sends his brother, Jerome (Dick Powell), to the U.S. on a goodwill tour. At a Maryland Horse Track, Jerome and local beauty Betsy Patterson (Marion Davies) meet cute when he criticizes her French accent. He quickly falls for her, but she will have little to do with him. She is currently being courted by two Senators who spend more time in Baltimore than they do in Washington and a baronet named Sir Harry. The next day, Jerome gets a job teaching Betsy French, dancing, fencing and whatever else he can think of. Betsy tries to resist him, but he woos her through song and they soon fall in love. The family is totally against the relationship because they believe that he is nothing but a tutor. When they meet again at a reception in Washington, Jerome asks Betsy to marry him before revealing that he is Bonaparte's brother who has now become Emperor of the French. Betsy consents to marriage, but Napoleon wants Jerome to marry into European Royalty and demands that Jerome do what is in the best interests of France. He and Betsy have a deep talk and Betsy is convinced that the best thing for her to do is to give him up.  She goes back to the States, where she is very unhappy. Napoleon still tries to convince Jerome to marry the Princess of Wurtenmburg but Mama Bonaparte convinces Napoleon to let his brother be happy, and Napoleon, the big softie agrees.  Jerome and Betsy are reunited in the requisite Hollywood happy ending.

My thoughts: A few years ago, I wrote a post about Betsy Patterson Bonaparte, not realizing that a movie had been made about her love story with Jerome Bonaparte, although I knew that a stage play, Glorious Betsy, had been written. Imagine my surprise when I opened the Turner Classic Movies bulletin and discovered that it had been filmed and was on TV! I eagerly set my DVR to record it. Although it falls short in terms of historical accuracy, and plays more like a traditional romantic comedy, it was still a pleasure to watch mainly because of the performances of Marion Davies as Betsy and Claude Rains as Napoleon.

Marion Davies is mainly known today for her relationship of over thirty years with newspaper and magazine tycoon William Randolph Hearst, but in her day, she was also known as gifted comedienne in such films as Peg O' My Heart.  Orson Welles unfortunately immortalized her in his film Citizen Kane as the untalented mistress of his Hearst doppelganger Charles Foster Kane. Hearts Divided is one of the last films she made before she retired from the screen for good in 1937.  Although she's pushing 40 in this film, she radiates youthful charm.  Her portrayal of Betsy is full of spunk and wit.  In her scene with Napoleon, she holds her own against him, not willing to back down for a second, until Napoleon pulls a guilt trip on her.  If only the real Betsy Patterson had had the chance in real life to meet Napoleon, she would have wiped the floor with him!

Unfortunately for Marion Davies, she's saddled with crooner Dick Powell as Jerome Bonaparte. While he wears the clothes well, he's just too American to pull the role off. You get the feeling that the closest this Bonaparte has been to France, is French Lick, Indiana. And the added songs don't help either or the romantic comedy convention of Jerome pretending to be a lowly tutor to win Betsy's heart because he just wants to be an ordinary guy.  The role really calls for someone with the continental charm of Maurice Chevalier or Charles Boyer.  Claude Rains is excellent as Napoleon, wily and domineering, stealing almost every scene that he's in. It's a shame that he never got to play the role in a full length movie biography.

One last note, the costumes in this film are strange.  While the men are wearing accurate period dress, as are most of the women, Betsy's dresses, hair and make-up look distinctly 1930's particularly the evening gown that she wears to the ball where it is revealed that Jerome, the tutor, is actually Jerome Bonaparte. I wouldn't be surprised if Hearst decided he wanted to see his Marion in something other than the Empire waist that was fashionable in 1804.

Blondi Blathers said…
Thanks for this! I'll keep an eye out for this film, now that you've piqued my interest.
January 7, 2011 at 1:56 PM

viridian said…
Your original post on Elizabeth Patterson led me to this blog. I was googling to find more information about her. I noticed a lovely portrait of her in a Baltimore museum. It was a great day when I found this blog.
January 7, 2011 at 8:08 PM

Elizabeth Kerri Mahon said…
Hi Virdian, which museum was it? The historical society? I know that they've published a new book about her which I'm dying to read.
January 10, 2011 at 4:36 PM