The Queen of Last Hopes: The Story of Margaret of Anjou 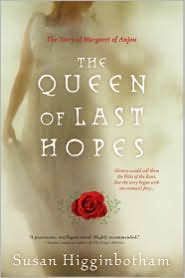 From the back cover:
Margaret of Anjou, queen of England, cannot give up on her husband-even when he slips into insanity. And as mother to the House of Lancaster's last hope, she cannot give up on her son-even when England turns against them. This gripping tale of a queen forced to stand strong in the face of overwhelming odds is at its heart a tender tale of love.


Award-winning author Susan Higginbotham will once again ask readers to question everything they know about right and wrong, compassion and hope, duty to one's country and the desire of one's own heart.

My thoughts:  I have a confession to make, I am a Plantagenetaholic.  I will basically read any novel that is set starting with Henry II all the way to Richard III (I'm also a Ricardian as well).  From the moment, that I first saw A Lion in Winter, through Jean Plaidy's series, Sharon Kay Penman, and Thomas B. Costain, I have been hopelessly addicted to the Plantagenet dynasty. I even sat through all 3 parts of Shakespeare's Henry VI. The 300 years of Plantagenet history is filled with amazing and fascnating women from Eleanor of Aquitaine to Margaret Beaufort. So I was quite happy to sit down with Susan Higginbotham's new novel about Margaret of Anjou.  I had the pleasure of reading Susan's last book THE STOLEN CROWN and giving it a blurb, about Elizabeth Woodville's younger sister, Katherine Woodville.  It was incredibly interesting seeing the War of the Roses through a relatively minor character in the drama.

With her new book Margaret of Anjou, wife of Henry VI, takes center stage. When we first meet Margaret she is a young bride of fifteen, newly arrived in England, and meeting her husband for the first time, a man who is less a warrior like his father but more of a saint. As the newly crowned Queen of England, Margaret has to not only endure the prejudices against a foreign Queen, but also eight long years of barreness before she finally bears the long awaited heir.

Higginbotham skillfully crafts a fast moving tale, bringing Margaret, Henry VI, and a host of other historical characters vividly to life, so real that at times I felt that they were in the room talking to me. What I loved about this book was that she manages to make the complex background of the War of the Roses where people seemed to change sides as fast as some pople change underwear, easy to understand. There are so many characters, some readers might get lost, but fortunately there is a handy list of characters at the front of the book for easy reference. At times, even I had to refer to it, just to get all my Beauforts straight. My interest in the story only flagged at times when the narrative moved away from Margaret's first person POV to Hal, Duke of Somerset and earlier to the Duke of Suffolk. I was more interested in Margaret's version of events then seeing them through their eyes.

Margaret's reputation over the years as suffered at the hands of historians, called 'the she-wolf' (you would think that the country that gave the world Shakespeae, Kipling, Milton, and Pope could come up with a better epithet) for daring to continue to fight for the throne for her husband and later for her son, instead of giving up and accepting a life in exile or letting the men do all the work. Higginbotham's novel does much to restore Margaret's reputation. Her Margaret of Anjou is strong, determined, loyal and a loving mother and wife.  She has flaws, she can be incredibly unforgiving and ruthless, all qualities which would be applauded in a man, but abhored in a woman.

I thoroughly enjoyed this novel and I was incredibly sad when I came to the end which is the sign of a story well told.
Margaret of Anjou Susan Higginbotham

Theresa Bruno said…
I just love Margaret of Anjou. She never gave up on her son, despite several devastating loses during the War of the Roses. If Margaret's son didn't die in battle, I believe the kingship in England would have been much different.

As for Margaret's husband, Henry VI, my favorite story (I forget which battle it was) is of him sitting quietly under a tree while a battle to restore him is being fought. Henry VI may have been mentally ill, but during his lucid periods he had the heart of a saint, not a king and warrior.
January 13, 2011 at 3:57 PM

BurtonReview said…
(To Goldenmeadow.. Subscribe to Posts feature is in the right columns)
To Elizabeth.. Great review.. I enjoyed the book as well for its history lesson but mostly for giving Margaret a better reputation! I loved the qualities that Higginbotham portrayed for Margaret. Definitely not a She-wolf!
January 13, 2011 at 8:18 PM

Elizabeth Kerri Mahon said…
Thanks Marie! I agree about Margaret. It's so tiresome that a strong woman gets a reputation for being a loose immoral woman when the reality is that she had no choice but to fight for her son's rights. If she had been a man no one would have questioned her.
January 15, 2011 at 12:09 PM