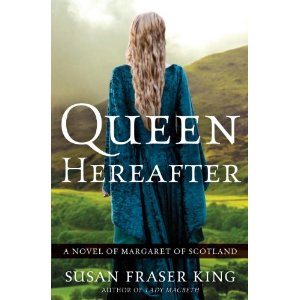 From the back cover: Shipwrecked on the Scottish coast, a young Saxon princess and her family—including the outlawed Edgar of England—ask sanctuary of the warrior-king Malcolm Canmore, who shrewdly sees the political advantage. He promises to aid Edgar and the Saxon cause in return for the hand of Edgar’s sister, Margaret, in marriage. A foreign queen in a strange land, Margaret adapts to life among the barbarian Scots, bears princes, and shapes the fierce warrior Malcolm into a sophisticated ruler. Yet even as the king and queen build a passionate and tempestuous partnership, the Scots distrust her. When her husband brings Eva, a Celtic bard, to court as a hostage for the good behavior of the formidable Lady Macbeth, Margaret expects trouble. Instead, an unlikely friendship grows between the queen and her bard, though one has a wild Celtic nature and the other follows the demanding path of obligation.


Torn between old and new loyalties, Eva is bound by a vow to betray the king and his Saxon queen. Soon imprisoned and charged with witchcraft and treason, Eva learns that Queen Margaret—counseled by the furious king and his powerful priests—will decide her fate and that of her kinswoman Lady Macbeth. But can the proud queen forgive such deep treachery?

My thoughts:  On my first trip to Edinburgh, when I was sixteen, the tour group that I was with went to visit the Castle and I remember entering St. Margaret's chapel and being entranced by her story, but over the years, I completely forgot about her, until I was offered the chance to review Susan Fraser King's new novel  QUEEN HEREAFTER. The novel deals only with the first few years of Margaret's long reign in Scotland, when she is just getting used to the idea of being a Queen and not the nun that she had always hoped and longed to be.  Her years at King Edward the Confessor's court and the brief reign of Harold Godwinson are told only in a few brief paragraphs at the beginning of the book. I admit that I was of two minds about that, on the one hand it would have been intriguing to see what life was like under Edward the Confessor and the jockeying for power amongst the rival claimants, but on the other hand, Margaret would have been just a passive participant at that time, so it would have just been her observations about what was going on.

In Scotland, is where Margaret's life really begins.  Fraser King paints a vivid and evocative portrait of a Scotland that is just slowly coming out of the Dark Ages.  I could smell the rushes on the floor, feel the roughness of the castle walls, and taste the hot oatcakes that the characters are constantly eating.  The book is powefully written, and a fascinating and layered story which transports the reader on a high-voltage ride to 11th century Scotland.  As a writer, she pulls the reader into this world that is rarely seen in historical fiction and makes it real and gritty.  Margaret is a woman torn between two worlds, the spiritual and the corporal. It takes a while for her to realize that she has been brought to Scotland for a purpose, but one she becomes convinced that she can do God's work in Scotland, she hits the ground running.  She completely transforms the castle keep at Drumferline, tames her shaggy warrior husband and manages to turn him almost into a more cosmopolitan monarch.  She argues theology with the Celtic priests and shows sympathy to their rituals, even though she knows that the Celtic Church needs to be brought more in line with Rome.

Although Margaret is reluctant to marry Malcolm, the two forge a partnership of mutual respect that eventually turns into a deep and abiding love. Although Malcolm is 18 years older than his bride, a widower with two small children, he completely falls under Margaret's spell. She creates a home for his two sons, bringing them to Drumferline from their foster homes, and showering them with maternal love. Malcolm is resistant at first to her changes, but then slowly realizes that his young bride has a lot to teach him about how to run a royal court. Margaret is one of those quiet rebels, able to achieve a great deal without ever having to raise her voice or shout. She just goes about her business and eventually everyone falls in line.

While I found Margaret to be an admirable character, I'm not sure that I would want her for a friend. All that peity and goodness would be a bit wearing after awhile. It can't be easy living with a Saint. It is a testament to the strength of Fraser King's writing that Margaret's faith is only one part of her character. She's also stubborn, vain, loving, and loyal. Fraser King waves fact and fiction seamlessly with the introduction of the character of Eva, the illegitimate daughter of Lulach, the son of Gruadh aka Lady MacBeth.  Eva is a reluctant hostage and spy, torn between her loyalties to the woman who raised her and the woman that she has to come to admire and respect, as well as love. It is through Eva's eyes that we see Margaret as more than just a pious goody-goody. As Eva comes to know and love Margaret, so does the reader.

I was sorry to see this book end, and I was grateful for the thoughtful Authors note at the back of the book detailing the rest of Margaret's life.  In fact, I enjoyed this book so much, that as soon as I put it down I ran out and bought her previous book Lady Macbeth. Gruadh is only a minor character in QUEEN HEREAFTER, and I'm curious to see how Fraser King interprets the woman that most of us know as the ambitious Queen with a conscience in Shakespeare's famous play.

Verdict:  QUEEN HEREAFTER is a fascinating and memorable book about a little seen aspect of Scottish history. Readers will fall in love with Eva and Margaret and the story of their friendship.
Queen Margaret of Scotland Susan Fraser King

Daphne said…
I"m looking forward to reading this one. On our recent trip to the UK we went to Edinburgh Castle and I thought the little Chapel was so sweet and peaceful. Although the castle itself had hoards of tourists, the Chapel seemed to have few visitors - which was kind of nice!
December 10, 2010 at 12:20 PM

Elizabeth Kerri Mahon said…
I remember that as well. I think it's because Margaret isn't as well known as Mary Queen of Scots. Plus there are no crown jewels in the chapel! I can just imagine how quiet it must have been when Margaret prayed there.
December 10, 2010 at 12:33 PM

Elizabeth Kerri Mahon said…
AT the risk of sounding biased, out of the last 3 historical fiction novels that I have read, QUEEN HEREAFTER, has to be my favorite.
December 10, 2010 at 3:24 PM

Susan King said…
Elizabeth, thank you so much, what a fabulous review - insightful and thorough and points well taken. I'm so glad you liked the book, and I think you're right about Margaret - it wouldn't be easy to be her friend! (I'd probably worry about her, just as Eva sometimes did.) Thanks for being part of the blog tour. ~SFK :)
December 11, 2010 at 11:31 AM

LisaMM said…
Terrific review! I'm so glad you enjoyed the book; it sounds fascinating! Thank you for being on the tour.
December 11, 2010 at 2:30 PM

Elizabeth Kerri Mahon said…
You are welcome Susan! Thanks for writing such a fabulous book.