Scandalous Women in Fiction: The King's Daughter by Christie Dickason 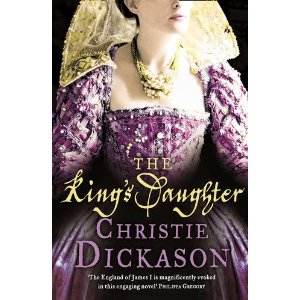 The daughter of James I, the Princess Elizabeth would not be merely her father's pawn in the royal marriage market. The court of James I is a dangerous place, with factions led by warring cousins Robert Cecil and Francis Bacon. While Europe seethes with conflict between Protestants and Catholics, James sees himself as a grand peacemaker—and wants to make his mark by trading his children for political treaties. Henry, Prince of Wales, and his sister, Elizabeth, find themselves far more popular than their distrusted father, a perilous position for a child of a jealous king. When Elizabeth is introduced to one suitor, Frederick, the Elector Palatine, she feels the unexpected possibility of happiness. But her fate is not her own to choose—and when her parents brutally withdraw their support for the union, Elizabeth must take command of her own future, with the help of an unexpected ally, the slave girl Tallie, who seeks her own, very different freedom.

My thoughts:  What a pleasure it was to get a chance to read a historical fiction novel that didn't feature either Elizabeth I, Henry VIII, or any of his wives!  I knew of James I's daughter Elizabeth also known as The Winter Queen for the short time that she and her husband were King and Queen of Bohemia, but I knew very little about her other than the Hanoverian line of Kings of England were descended from her, through her daughter Sophie.  The book details Elizabeth's life from the age of nine during the Gunpowder Plot through her marriage to Frederick, the Elector Palatine when she was sixteen.  When the book begins, James has only been on the throne for two years, and as already made himself not that popular. Elizabeth, who is living away from court in the country, is almost kidnapped.  She manages to get away and to attempt to warn her brother of the plot.  However, her actions can be considered treasonable.

The author picked an interesting time period in Elizabeth's life to write about, her pre-teen and teenage years.  Although the main character is young, this novel is not written as young adult fiction, although teenagers who enjoy historical fiction will no doubt enjoy reading about a girl their own age.  The book is written in first person, and at times I had to remind myself just how old Elizabeth was, because she seemed alot older than we would think a nine year old would act. But in Tudor and the Stuart period, children were almost minature adults.  Elizabeth is feisty, as befits her Stuart heritage, stubborn, wilful but also vulnerable.  She has been raised by other people for most of her life and has seen very little of her parents, particularly her mother. Her strongest relationships in the book, apart from her animals, are with her older brother Henry and the slave girl Tallie that she is given as a gift.

The book really began for me when Elizabeth arrives at court, and she meets Tallie. Tallie, although African, was born in Bristol, no doubt when her mother first arrived on shore.  She is sold to a brothel where she is raised and taught how to read and write and play the lute.  Just when she thinks that she is about to finally be forced to turn tricks, she is sold to the palace and given to Elizabeth who has no idea what to do with her at first.  The tentative friendship that they strike up is probably one of the most interesting that I have ever seen in a book.  Tallie is always mindful, given her experiences, that she can never really trust white people, particularly a princess. Elizabeth wants Tallie to be the one person who always tells her the truth, no matter what, a heavy burden. The adventures they experience as Elizabeth is paraded before suitors and as Tallie becomes her eyes and ears in the Palace are worth the price of the book alone. Elizabeth is not always likeable, she can be self-pitying at times, and she doesn't always think things through before she takes action, but she has a good heart.  When James I tells her that it's a pity that she was not born a boy, that she would have made a fine King, you believe him.

King James in Dickason's hands is vain, awkward, and prone to jealously, particularly towards his two oldest children who without doing anything, are more popular then he is.  Disdainful of women, he spends his time with his male favorites who fawn and flatter him and perhaps other things to earn titles and a fortune.  The King if also prone to violent rages which are terrifying and constantly keep Elizabeth off balance. The scenes wehre Elizabeth confronts her father and refuses to marry one of the many princes vying for her hand will have rooting for her to best her old man. Although she's only a girl, one gets the feeling that the King admires his daughter, although she's still not quite as clever as he thinks he is.

This is another book where politics plays an important part, who has it, what people are willing to do get it and keep it. Living at the Stuart Court was as much a minefield as living at the court of Queen Elizabeth I've read how courtiers would bankrupt themselves for a place at court but I'm amazed that more people didn't have nervous breakdowns, trying to curry favor and losing it, or never achieving it.

The weakest part of the book for me were the brief passages that were narrated by other characters such as Henry, James I, Francis Bacon, and Cecil among others. The only ones that I really felt were necessary were the passages narrated by Tallie, which gave us insight into her mind about what was going on at court and her relationship with Elizabeth. From an early age, Elizabeth is aware of her importance in the pecking order of her family.  While her older brother Henry is the heir, Elizabeth's worth lies in who her father marries her too. Amazingly Elizabeth takes matters into her own hands when she realizes the man that she wants to marry, Frederick Elector Palatine and works to achieve her aims. How she achieves that goal, and how close she almost comes to losing make up the last third of the novel.

Dickason has a background in theatre, she worked as a director with the Royal Shakespeare Company amongst others, and it is evident in her novel, the way that she stages scenes in the book as in a play.  She has a keen eye for those key moments that are the most dramatic, for example when Elizabeth finally gets the chance to have an audience with her mother after years of seperation only to end up disappointed, when Tallie takes her to Southwark after Elizabeth tells her that she wants to know what goes on between a man and a woman, and so many others. She also writes comedic scenes of genius such as the court ladies blacking up for the Queen's masque and not being able to remove the make-up.

Verdict:  If you are suffering from Tudor fatigue, and are looking for a novel with a strong female protagonist, and an appealing and unusual cast of secondary characters, then I recommend THE KING'S DAUGHTER.
Elizabeth Stuart James I

Theresa Bruno said…
No royal child has it easy and Elizabeth Stuart was no exception. I didn't know, however, that she was the matriarch of the Hanovers. Now we know where the modern royal family gets their spirit from.

Anonymous said…
Thanks for such a thorough review and for being a part of the tour! I too am tired of reading about the Tudor royals so I'm looking forward to picking this one up for myself.
December 9, 2010 at 9:54 PM

Malena of Royal Women said…
I am looking forward to read this, and will order it as a special Christmas gift to myself. The only encounter I have had with Elizabeth was in The Murder in the Tower by Jean Plaidy. She doesn't really have a part in that book, though. So I will be reading the King's Daughter! Thanks for a great review.
December 16, 2010 at 3:25 AM