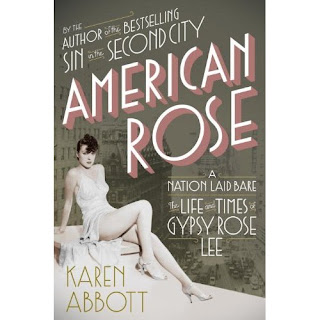 I have been fascinated by Gypsy Rose Lee ever since I saw the movie version of Gypsy! starring Rosalind Russell and Natalie Wood but I had no idea until I was older and knew more about musicals that it was based on a true story.  Now Karen Abbott has written a magnificent new book about the elusive, elegant and erudite practioner of the art of the striptease.

The book is not just a biography of a fascinating woman who moved beyond what must have been a troublesome and traumatic childhood, to reinvent herself into a cultural icon.  It is also a social history of era that will never be seen again except in grainy photos and old movies. Gypsy born Ellen June Hovick on January 9, 1911 wasn't even allowed to keep her original name. The minute her younger sister was born, Ellen June became Rose Louise, so her pretty blonde sister could have her name.  From the time she was a child, Gypsy was treated as an inconvenience, the older untalented sister forced to live in the shadow of her more talented adorable sibling.  The book traces the girls lives as they traipse across the country from Vaudeville house to Vaudeville house, sometimes the leading act and sometimes the bottom of the bill. Discontented with her own life, Rose married by fifteen and had two children she never wanted, she was the ultimate stage mother.  She forged birth certificates making the girls older or younger depending on the gig, cajoled more money from managers, pushing her daughter June to dance in toe shoes at the age of two.  She robbed her daughters of their childhood to fulfill her own dreams.

That Gypsy and her sister grew up to be somewhat functioning human beings is a miracle. But Gypsy's transformation from the untalented, ugly duckling sister to the toast of Burlesque is where the book really sizzles.  With the coming of the depression, the rise of radio and talking pictures, Vaudeville morphed into Burlesque, as producers pushed the envelope to keep audiences coming.  Skin sells and the idea of beautiful women taking off their clothes was born.  But Gypsy elevated it into an art form, taking 15 minutes just to take off a club, talking about Sartre and Shopenhauer on stage, talk-singing while revealing just so much, she became a sensation.  Abbott details the lifes of the Minksy brothers, in particular Billy Minksy, who made Gypsy a star and became the biggest producers of burlesque bringing it from the Lower East Side and Harlem to Broadway, battling censors and the moral majority as the Roaring Twenties brought the more sober thirties. Before Guiliani cleaned up the smut in Times Square, another mayor Fiorello LaGuardia did the same.

Abbott digs deep beneath the surface like a surgeon to get at the heart of her subject. Her writing is razor crisp, witty and insightful, a page-turner that is a worthy companion to her first book SIN IN THE SECOND CITY (If you haven't read this book I suggest that run out and buy it now from Amazon or Borders). I ate this book up like it was a hot fudge sundae with extra chocolate sauce (no nuts!).  Gypsy sold sex but in a sophisticated way that hadn't been seen before, a prudish stripper! One of my favorite parts of the book is how Gypsy deliberately chose who would be the father of her baby and why. The book also delves into her ill-fated love affair with Mike Todd. In the end, the book is a love story, not just between a mother and a daughter, but also between sisters, survivors from the boot camp of Rose Hovick. A dysfunctional love/hate relationship,  they couldn't live with or without each other.

My only quibble with the book is I felt that the relationship between Gypsy and her son Erik was given short shrift, and I would have liked to have known a bit more about the reaction of Gypsy Rose Lee to the opening of the Broadway musical. How did she feel seeing her story on stage, and that finally after all these years Mama Rose was a star. Let's face it, even though the show is called Gypsy, the character you remember is Mama Rose, it's the reason why the show has been revived so often over the years.  Actresses long to sink their teeth into that ferocious woman, by turns seductive and wily, who would literally kill for her daughters.

The story of Gypsy is just as fascinating to filmmakers as it is to biographers. HBO is planning a miniseries starring Sigourney Weaver based on the book written by Gypsy's son Erik Preminger.

Verdict:  A rollicking joy ride through the life of a daring, inventive, thrilling woman who in her lifetime ran the gamut from Vaudevillian, stripper, writer, to talk show host and cultural icon. Madonna and Lady Gaga could take lessons from Gypsy Rose Lee in how to hold the public's attention while revealing nothing of oneself. Abbott is one of the most talented biographers to come down the pike. I've very much looking forward to what she has next up her sleeve.
Gypsy Rose Lee June Havoc Rose Hovick