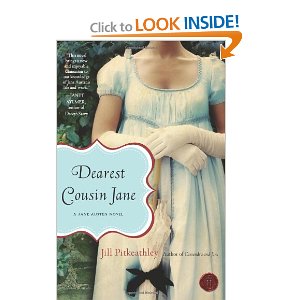 From the back cover: In Dearest Cousin Jane, an enchanting new novel that draws on historical fact, Jill Pitkeathley paints a luminous portrait of the true-life cousin of a literary legend—from her flirtatious younger years to her profound influence on one of the world's most beloved authors.

Free-spirited and seductive—outrageous, precocious, and a well-known flirt—Countess Eliza de Feuillide has an unquenchable thirst for life and a glamorous air that captivates everyone around her. Rumored to have been born of a mad love affair between her mother and the great Warren Hastings of the East India Company, Eliza sees the world as her playground—filled with grand galas, theater, and romance—and she will let nothing hold her down. Even tragedy cannot dim her enthusiasm. Losing her only child at an early age and widowed when her husband—the dashing French count Jean de Feuillide—is claimed by Madame la Guillotine during the dark days of the Reign of Terror, Eliza is determined to remain indomitable, unpredictable, and unfettered. And it is this passionate spirit that she brings to a simple English country parsonage to influence the life, the work, and the world of her unsuspecting cousin . . . a quiet and unassuming young writer named Jane Austen.

Today is Jane Austen's 235th birthday, so one lucky winner will get a copy of Jill Pitkeathly's novel about Jane's cousin Eliza Feuillide Dearest Cousin Jane as well as a copy of Janet Mullany's paranormal novel Jane of the Damned. I have read both novels so I can assert that both are extremely enjoyable for different reasons. Dearest Cousin Jane, although it's ostensibly about Jane's cousin, is really more about the Austen family itself.  The book is told from multiple first person point of view including Eliza, Henry Austen her future husband and Jane's brother, James Austen, Jane's older brother, Cassandra, Mr. & Mrs. Austen, Eliza's mother Philadelphia Hancock and Jane's cousin Philadelphia Walters.  They all have their own take on Eliza which is fascinating but Eliza remained elusive to me. By the time the book ended, I felt I knew less about her than I did before.  Pitkeathly's assertion is that Eliza was the model for certain of Jane's characters, most notably Mary Crawford in Mansfield Park although Jane herself said that her books were not drawn from life.  However, reading this book, I could see elements of Mary Musgrove and Fanny Dashwood in Mary Austen, James's second wife, and also hints of Mrs. Bennett in Mrs. Austen.


Here are the rules for the giveaway. Sorry, this is only for Canadian and American readers! The contest runs from today through Monday, December 20th.

Amy said…
What an awesome giveaway! I would love to read both of these books! :-) Thanks!

Blondi Blathers said…
Eliza has always sounded like such a delightful person to know, so irrepressible, so spirited, just a lot of fun. I look forward to reading this one, even if I'm not the winner. Thank you very much for the heads up!

Audra said…
Happy birthday to Jane! Lovely giveaway -- been drooling after Jane of the Damned for a while. Thank you!

Karyn said…
Happy birthday, dear Jane. Thank you for writing books that are a joy to read!

Courtney said…
Happy Birthday to Jane! From what the biographies of Jane say about Eliza, I always felt like the writer drew on her cousin to write Mansfield Park, and her traits came through in Mary Crawford's worldly charm. Mary isn't a great person, but it's difficult not to find her intriguing.

Jesica said…
What a good giveway, I love ALL books and can't wait to read these whether I win this or not =)

meeyeehere said…
Oh,I would love to win this! I simply adore Jane! I am already a follower so no extra point for me.Poo! Still crossing my fingers!
jacksoncrisman@yahoo.com
December 16, 2010 at 6:50 PM

Linda said…
What a lovely way to recognize Ms. Austen on her birthday. The books sound great. Thanks for the giveaway.
I am already a follower.
lcbrower40(at)gmail(dot)com
December 16, 2010 at 7:42 PM

Louisa Cornell said…
I always love to read about people from an insider's point of view. I am forever grateful that people in this era were prolific letter writers and diarists. There is a wealth of information in sources such as these. Can't wait to read the book!