Duchess of Windsor's Jewels on Sale at Sotheby's 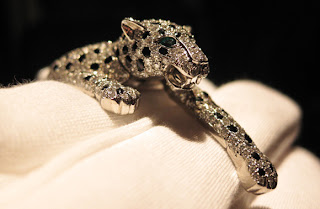 The late Duchess of Windsor's jewels went on sale again at Sotheby's. The items up for grabs include this gorgeous bracelet made by Cartier.  The Duke gave his bride many beautiful gifts during their long marriage.  Rumor has it that Madonna has bid on several pieces.  She's currently directing a movie called W.E. about the Windors.  20 pieces of jewelry were sold Tuesday night for 8 million pounds which is roughly I would say almost $16 million dollars.

Here is an article from Hello Magazine regarding the sale and one from the Daily Mail in the UK about the sale itself.  Apparently the Duke didn't always pay for the jewelry that he bought for the Duchess or the jewelers had to wait for a long time for their money.  Perhaps he thought that just the fact that he bought the jewelry and the Duchess was wearing it was payment enough, instead of giving them cold hard cash!

If you had the money, would you have bid on an item from the collection?  Whose jewelry would you like to own? Personally I would love the diamond necklace that caused all the fuss during Marie Antoinette's reign.
Marie Antoinette The Duchess of Windsor

Evangeline Holland said…
I would! I neither like nor dislike Wallis, but she is fascinating, and she had great taste in jewelry. Otherwise, I think I'd want to buy some of the gems from the Marlborough collection, when the 7th Duke sold off some family heirlooms for money in the 1870s.
December 2, 2010 at 6:52 PM

Elizabeth Kerri Mahon said…
Hi Evangeline, I agree with you. The Daily Mail article was clearly biased against the Duchess and her taste in jewelry. I, for one, would adore to have the Cartier panther bracelet.
December 3, 2010 at 11:57 AM