Scandalous Women in Fiction: The Princess of Nowhere 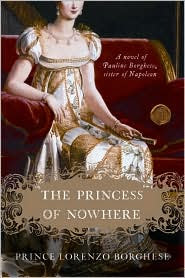 THE PRINCESS OF NOWHERE: A novel of Pauline Borghese, sister of Napoleon - Prince Lorenzo Borghese
Harper Collins/Avon A
December 7, 2010

From the back cover:  Princess Pauline Borghese was one of the most fascinating women of her day. Now her story is unforgettably told by one of her descendants....

The sister of Napoleon Bonaparte, Pauline knows that her sole purpose has always been to make an advantageous marriage to further her ambitious brother's goals. But her joie de vivre cannot be contained—much to the dismay of her new husband, Prince Camillo Borghese. Pauline and Camillo's relationship is tempestuous at best, with Pauline constantly seeking the attention of other men—especially after a heartbreaking loss leaves her devastated, desperate for attention, and searching for answers. Yet despite everything, the love that brought Pauline and Camillo together, as imperfect as it might be, can never truly be stifled.
As seen through the eyes of the young woman who served as Pauline's lady-in-waiting and surrogate daughter, The Princess of Nowhere is an unforgettable tale of a remarkable life that was a study in the excesses of the time and of the power of a woman strong enough to defy expectations.

When I first heard about this book, I was skeptical. I had watched Prince Lorenzo Borghese when he was The Bachelor back in 2006, and to be perfectly blunt, I thought he was a douche. So I was prepared to find his first effort at historical fiction to be lightweight at best.  Well color me surprised! This just goes to show you that one shouldn't be so quick to judge.  THE PRINCESS OF NOWHERE is a promising historical debut from the Prince. It is a fast paced lively romp, detailing the scandalous life of Napoleon's favorite sister, Pauline Bonaparte Borghese.  I read this book in one night. The Prince has a personal connection to the story, his great-great-great uncle Camillo Borghese was married to Pauline.

The story is narrated partly by a fictional characater Sophie LeClerc, the cousin of Pauline's late first husband Emmanuel LeClerc.  Sophie comes to live with Pauline as her ward at the tender age of 10. She's lost her mother, and she falls under Pauline's spell immediately.  When Pauline is courted by Camillo Borghese, Sophie is jealous that the Prince gets to spend more time with her idol than she does.  The book is also narrated in part by Camillo, who is proud, a bit of a prude, uncomfortable in Paris because he doesn't speak the language. He too falls under Pauline's spell, but he has doubts about the marriage from the beginning, having heard of Pauline's reputation.  It is only when he comes across Pauline, unbeknownst to her, while she is asleep after spending hours taking care of a sick Sophie, that his last doubts are melted away.

I have read a great deal about Pauline Bonaparte, and Prince Lorenzo captures her capricious, spoiled nature perfectly.  Pauline is not always likeable but she is endlessly fascinating as she constantly disarms the reader, who thinks that they know exactly who she is.  She admits that she is not a good wife, but she is a loyal and loving sister to all her brothers not just Napoleon.  The Emperor is largely kept off canvas, but his presence looms large in the novel.  While Sophie has the longest journey in the book, growing from a shy, insecure girl who hero worships Pauline to woman who has learned that her idol has feet of clay yet can still find it in her heart to love and forgive her, I found Borghese's characterization of his ancestor Camillo to be the most fascinating. Camillo is often seen in biographies as something of a buffoon or a boor.  There were rumors during his lifetime that his relationship with Pauline floundered because he either impotent or gay.  Borghese gives us a portrait of a traditional man bound by the conventions of his class who is mesmerized by a woman who is so different from the women that he is used to dealing with.  At one point, Camillo remarks that Pauline should have been his mistress, and the Duchess Lante della Rovere (who became his mistress) should have been his wife.

In THE PRINCESS OF NOWHERE,  Borghese writes Pauline and Camillo's story as a beautiful and tragic love story.  I'm sure historians will quibble at that interpretation but he makes a compelling argument in the book that it was so. That despite the fact that it was something of an arranged marriage, that Camillo and Pauline could have had a happy life if trust and communication had been part of the bargain. The reconciliation scenes leading up to Pauline's death are beautifully written.

Verdict:  A promising historical fiction debut that has made the reviewer eat her words. Hopefully we will be seeing more from Prince Lorenzo Borghese and that this wasn't a one off. Historical fiction lovers and those interested in Napoleon will gobble up this book.  The real Pauline Bonaparte Borghese would be as pleased with her fictional depiction as I'm sure she was pleased with Canova's sculpture of her.

Note:  The book's website has some wonderful photos of the real locations in the book.
Pauline Bonaparte Prince Lorenzo Borghese

Amy said…
I received this book as an ARC and I've been putting it off for the same reason you so eloquently stated: I wasn't impressed with the author. But, believe me, I will start this one tonight. Thanks for the great review!
November 17, 2010 at 12:49 PM

Malena of Royal Women said…
What a great review, really made me want to read this! I just have to laugh a little at the coincidence that the fictional Sophie's name is Sophie LeClerc. I have read the Southern Vampire Mysteries-series (and also watch True Blood), and the vampire queen of Louisiana is called Sophie-Anne Leclerq.
November 17, 2010 at 1:19 PM

Amy DeTrempe said…
This is abook that I will forward to reading. Thanks for your thoughts.
November 17, 2010 at 1:46 PM

Audra said…
Fabulous review -- I literally snortled my water at your opening. I rolled my eyes when I saw the author so it's exciting to learn it's not awful!!
November 17, 2010 at 3:15 PM

Elizabeth Kerri Mahon said…
I think that the Prince will change a lot of people's minds, at least those who watched him on The Bachelor. It was surprisingly well written, and the sex scenes while tasteful were quite hot. Hotter than anything we saw on screen that's for sure! I know this book was personal for him, because she was married to his ancestor, but I think it would be a shame if he didn't delve into the vaults and write another book.
November 18, 2010 at 4:10 PM

Lorenzo Borghese said…
Thank you all for your comments/reviews. If you want to learn more about the book or read the prelude, please visit www.princessofnowhere.com

You can also share with me your thoughts or feel free to write me questions by visiting the blog.

And yes, i was a "douche" on the bachelor but that's because i hated every minute of it and felt awful telling numerous girls i loved them...only to have to break up with them days later. Not really my style.
December 1, 2010 at 10:28 AM