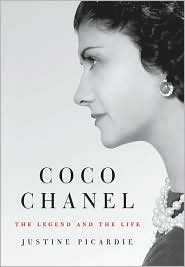 I picked up the following two books recently at the bookstore.  One is a new biography of Chanel entitled, COCO CHANEL: The legend and the Life by Justine Picardie. Everyone knows who Gabrille 'Coco' Chanel was, or at least they know the name of her fashion house, even if they don't know who she was.  This book is expensive, $40.00 (although right now you can buy it at bn.com for $22), but it is filled with amazing photographs. I spent the first few days that I had the book just looking at the photographs, without even reading the text.  As a biography, Picardie doesn't reveal much new information about Chanel, but it is an entertaining read. I particularly enjoyed the description at the beginning of the book of her visit to Chanel's apartment. I would put this on my shelf next to my Axel Madsen biography. 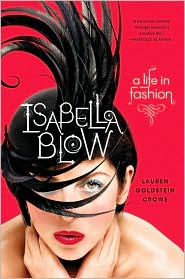 The other new book I picked up recently is one of three new biographies of the late stylist, beauty editor and fashion muse, Isabella Blow.  One of the other books is a biography written by her late husband which should be interesting to read, considering that he wasn't much involved in her life in the last years. The book is entitled Isabella Blow: A Life in Fashion, and has an arresting photograph of Isabella on the cover. If you are not really a fashionista, you might not have heard of Isabella Blow.  She discovered and promoted both hat designer Philip Treacy and the late fashion designer Alexander McQueen.

Since I knew less about Isabella Blow than I did Chanel, I found this book fascinating. I had read the article in Vanity Fair after her death, but I had no idea what an interesting life she had lead. Isabella was born Isabella Delves Broughton on November 19, 1958.  Her grandfather Sir Jock Delves Broughton had been accused of killing Josslyn Hay, the Earl of Errol in Kenya in 1941, because Hay had been having an affair with his wife Diana (The book and film White Mischief are about the case). While Jock was acquitted, he was ruined in Kenyan society. He had already gone through most of the Delves Broughton fortune, selling of 3/4 of the estate.  Depressed he committed suicide in 1943.

Isabella grew up in the shadow of Doddington Hall, the family seat which had gone unoccupied since before the Second World War, there was simply not enough money to run the house and the family had contemplated selling it on numerous occasions. Because of that Isabella felt that she had been cheated out of a certain kind of life, and she worried constantly about money, that she would be left destitute. It was recurring them in her life, although she had no idea how to manage money.  Like most girls of her generation, she wasn't raised to have any kind of real career or to go to university.  Her father believed that only lesbians went to college. Instead, she went to secretarial schools and did odd jobs like cleaning houses, and selling scones.

It wasn't until she moved to the United States with her first husband that she stumbled on the idea of a career in fashion. She talked her way into a job as one of  Anna Wintour's assistant's at Vogue.  She was crap at the job, but it allowed her to see behind the scenes, eventually she moved on to work for Andre Leon Talley before heading back to the UK where she got a job at Tatler helping out with the photo shoots.  Isabella was now in her element, coming up with crazy ideas for fashion shoots, and roping her aristocratic friends into posing.  She's always had an unusual eye and an ecletic taste in clothes, she thought nothing of wearing priests vestments as an outfit.  For her wedding, she wore a medieval dress with a gold horned helmet designed by Philip Treacy.

After meeting both Treacy and Alexander McQueen at their graduate fashion shows, she did everything she could to promote their careers, introducing them to important people in the business, using their clothes in fashion shoots, encouraging her friends to buy their stuff.  She even got her relatives and friends into modeling, including Honor Fraser, Sophie Dahl and Stella Tennant.  Isabella lived and breathed fashion, she would encourage designers to take their work to the limit, forgetting about practical things like wearability. For her fashion was like art.

What was intriguing about this book was the sense of fun and cheekiness that comes across in the pages.  Isabella was outrageous, not afraid to take her clothes off in public, to say incredibly forward things. She would often show up late at dinner parties and annouce that it was because her husband wanted a quick shag and then show the guests the grass stains on her clothing. She pushed the envelope on what was accepted in fashion shoots, helping Toby Young facilitate the 'Cool Britannia' photo shoot at Vanity Fair that basically saved his job.

Over time Isabella became famous for her work, MAC even created a lipstick named after her, but it didn't assuage the nagging sense of insecurity and inadequacy that she felt. She and her husband Detmar were unable to have a child, and she turned to her work as a substitute for the family that she didn't have. Contributing to her depression was the sense that she hadn't gotten the recognition that she deserved for her work, that what she did somehow didn't matter in the long run compared to the designer, and photographers that she worked with. Still despite her depressions, which became darker and darker as time went on, she still kept her wicked sense of humor until the end. Unfortunately Isabella was unable or unwilling to do the work that she needed to do to manage her depressions, apart from taking medication.  She ended up taking her life at the age of 48 in 2007.

Isabella Blow: A Life in Fashion is a slight book but Lauren Goldstein Crowe manages to convey the essence of her subject in its pages. I would recommen both books for those interested in reading about fashion.
Coco Chanel Isabella Blow

dave hambidge said…
Do you know which Doddington Hall it was, Lincolnshire or Cheshire... I know both!
November 28, 2010 at 2:23 PM

Elizabeth Kerri Mahon said…
It's the one in Cheshire. It's all boarded up since the family hasn't used it in years. They live in a smaller house on the property.
November 29, 2010 at 12:12 PM