On the Bookshelf - After the Falls 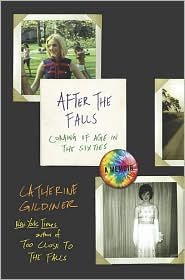 AFTER THE FALLS: Coming of Age in the Sixties
Catherine Gildiner
October 28, 2010, 368 pages Viking Adult


From the back cover:

It's 1960 and twelve-year-old Cathy McClure has just been thrown out of Catholic school for-among other transgressions-filling the holy water fount with vodka. In the hopes of giving Cathy a fresh start away from their small town, the McClures leave behind Niagara Falls and the family pharmacy to start over in suburban Buffalo. But life in a subdivision and a school filled with "pubescent cheddar" holds little appeal for a girl who began working at four and smoking at nine. As the quaint world of 1950s America recedes into history, Cathy dives headfirst into the 1960s. Along the way, she adopts many personas with gusto-vandal, HoJo hostess, FBI suspect, civil rights demonstrator- but when tragedy strikes at home, Cathy must take on her most challenging role yet. As candid and compelling as Mary Karr's The Liars' Club and Jeanette Walls's The Glass Castle, After the Falls is an irresistible account of one girl's comingof-age during a tumultuous era and the moving tale of a rebellious spirit learning what it means to be a daughter.

My thoughts:  There are several kinds of memoirs, those written by celebrities or people who have slept with celebrities, people who do crazy things like going over Niagara Falls in a barrel or trying to jump the Grand Canyoon.  There are rehab memoirs, memoirs by former criminals and then there are memoirs like Catherine Gildiner's, what I like to call 'Slice of Life' memoirs.  These are my favorite kinds of memoirs.  They say that everyone has a story within them, and the former Cathy McClure's story is one that everyone can relate to, even if they didn't grow up in Upstate New York as the 60's were starting.

I devoured this book in one sitting, I couldn't put it down. I felt as I'd found a 'sister from another mother.'  I totally identified with Cathy's struggles to fit in, her clashes with her parents, her sarcasm, and her burgeoning activism. While I never set a donut shop on fire, I did struggle with not 'fulfilling my potential' in school which is another way of saying that I was just as bored as Cathy in my high school. I enjoyed reading about how Cathy 'faked it until she made it' with the popular kids and cringed as she must have when she discovered that she didn't make senior varsity cheerleader because of her complexion.  Who hasn't heard something they shouldn't have or learned something that they were better off not knowing in high school.  It may not be the sixties but some rights of passage never change. One of my favorite stories in the book is when Cathy and her mother wrote anonymous letters to try and get rid of all the black lawn jockey's that littered the front lawn's in Buffalo, and what she did, when the town didn't respond quite the way that she hoped.

When Cathy leaves home to go to college, hoping that she will finally find her niche, only to discover that college might not be as different as high school after all, I was right with her. At college, she finally falls in love, but Cathy being Cathy, it is not with anyone that she might be expected to fall in love with. She finally finds good use for her 'bossy and brassiness,' with her summer jobs working for the Department of Welfare. What I found refreshing about this book was Gildiner's unflinching honesty about her life.  She doesn't spare anyone, least of all herself, for the mistakes that she made, the things that she wishes that she could have done differently. I responded to her sarcasm, and the way that she not only skewers life in Upstate New York but also the foibles of grown-ups.

There are so many fascinating and endearing stories in this book, but what will ultimately grab you by the heart and wring it dry, is the story of Cathy's relationship with her father and his subsequent illness. Anyone who has ever dealt with the realities of having a parent fall ill, will immediately know exactly what Cathy is going through. I can't say enough good things about this book. Cathy's experiences are unique, laugh out loud funny, charming, exasperating, but she's also every woman who has ever struggled with conformity and accepting her differences, and learning to see her parents as people and not just as parents. That I think is one of the hardest things about growing up, learning to seperate from your parents, yet still trying to keep that connection.

Verdict:  A heartwarming and heartbreaking look at one young woman's journey through the rocky road of the 1960's.
Catherine Gildiner