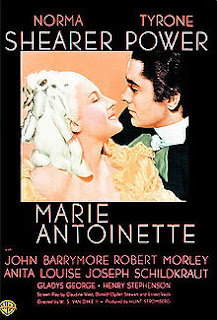 When I was a kid, I had a book called The Great Romantic Films by Lawrence Quirk which detailed a list of about 35 films up to about 1973.  I used to flip through the book constantly, marking off all the films as I saw them at the old Regency theater in New York and on television. One of the films listed  in the book was the 1938 film of Marie Antoinette starring Norma Shearer as the doomed Queen. For some reason or another, I had never gotten around to seeing the film until last week.

Just a little background on the film.  Norma Shearer had been Queen of the MGM lot during the late 1920's and '30's due to her beauty and talent but also to the fact that she was married to the head of production Irving Thalberg.  Marie Antoinette was the last project that he worked on before he died in 1936, while it was in the planning stage. Shearer became determined to make the film, even though her interest in her film career was waning. William Randolph Hearst had wanted to produce the film for his mistress Marion Davies (which would have been a disaster), but he clashed with Louis B. Mayer so he and Marion packed up their trailer and hightailed it over to Warner Brothers.

According to Wikipedia, the costumer designer Adrian studied the paintings of Marie Antoinette, even using a microscope to see the details. Some of Norma Shearers gowns combined weighed over 1,768 pounds.  The gowns exist to this day, although I'm not sure where they are being kept. Fabrcis were specially woven, and the fur on one of Shearers costumes was dyed to match her eyes, even though the film eventually ended up being shot in black and white.  The costumes are lavish and overdone (who knew they used so many sequins in the 18th century?). The film cost $2.9 million and it was not shot in color because it would have added to the budget which is shame because I'm sure it would have been stunning to see some of those costumes in color. Although the film was shot on the MGM lot, some scenes were shot on location at Versailles.  Apparently the film was the first time a film crew was allowed to film on the grounds of the palace.

My thoughts:  The film opens in Vienna, when the 15 year old Marie Antoinette is informed by her mother, the Empress Maria Theresa that she is to be wed to the Dauphin in France. Over the course of the film, Marie Antoinette must learn to negotiate the tight rope of the French Court,  as well as forge a marriage with a man she has just met who is indifferent to her.  When the King's mistress, Madame du Barry sends the Dauphine a cradle on her second wedding anniversary as an insult to the childless couple, Marie Antoinette becomes determined to become a party princess, spending more time shopping, dancing, and gambling to fill the deep hole in her life.  After she insults Madame du Barry, after agreeing to speak with her at a ball (to be fair du Barry started insulting her first), the King decides to have her marriage to the Dauphin annulled. Before the annullment can take place, the King dies of small pox and Marie Antoinette and her husband are King and Queen. As Queen, she becomes a well-meaning but out of touch humanitarian, trying to steer her husband through the minefield of French politics.  During the last half of the film, Marie Anoinette finally 'achieved greatness" according to Zweig's biography when the family are imprisoned. The final scene shows Marie Anoinette, hair shorn and gray, on her way to the guillotine, as the audience hears the voice-over of the young princess who was so excited at the idea of being Queen of France.

While Sofia Coppola's film may be more historically accurate in terms of depicting Marie Antoinette's early struggles, including the scene where she is stripped of her Austrian clothing and dressed in the French fashions, and the claustrophobia of the court and the constantly being on display, I much preferred this version. The film runs through Marie Antoinette's entire life, including the Affair of the Necklace which seems shoved in without any real context, clocking it at a whopping 2 1/2 hours. There is a grandeur to the film which is missing in the Coppola version and any sense of pathos. Even though Norma Shearer is pushing 40 at the time the picture was made, making her less credible in the early scenes when Marie Antoinette was a teenager, she grows over the course of the film as the character grows and changes from an immature teenager to the mature Queen facing her death with dignity. She looks absolutely stunning in the gowns, but it is the final scenes where she chose to forgo make-up to look as haggard and exhausted as possible that you understand why all the fascination with Marie for the past two hundred odd years.

The most heartbreaking scenes in the film are the final supper that Louis XVI has with his family before his execution, I defy anyone not to cry when the Dauphin asks his father to fix his toy soldier for him, and Louis promises to bring it back to him the next day, and the scene the next day where the Dauphin is tore from Marie Antoinette's arms, as she begs and pleads for more time.  Finally she pulls herself together for her son's sake so that he'll be less frightened.

The film certainly lives up to its inclusion in The Great Romantic Films.  The jury is still out on the exact nature of Marie Antoinette's relationship with Axel Fersen, most historians are evenly divided on whether they actually had an affair or not, but the scenes in the film are wonderfully romantic. Tyrone Power is at the peak of his handsomeness in this film, and one can certainly understand why Shearer's Marie would fall in love with him.  Their first meeting in the film is not historically accurate, here Marie Antoinette is at a gambling den, when she spies him from a window, and convinces him to pretend to be a Russian soldier.  The scene goes on for way too long but Power looks dashing in his first scene.  In reality, Fersen and Marie met at a masked ball, and he didn't know that he was talking to the Dauphine of France until she finally removed her mask.

There is a scene in the film where he comes to her and tells her that he had fallen in love wih her before he even knew her that just makes your heart melt, as does Marie's as she falls into his arms. Again, the final scene of the film just is crushing as the camera pans to Fersen hearing the crowd roar as the guillotine falls, kissing the ring that Marie gave him.  Robert Morley is wonderful as the awkward, child-like, and strange Dauphin, who seems to have been dropped on his head as a child. Throughout the course of the film, the audience gets to see their relationship grow into mutual love and respect.  Joseph Shildkraut plays a machievellian and oily, Philippe Duc D'Orleans who would sell out his own family.  The film implies that there was some kind of flirtation between the two of them that ends when it looks like Marie is on a fast coach back to Vienna. John Barrymore has only a few scenes as Louis XV but he makes the most out of them, and he even gets to say in English, 'Apres moi, Le Deluge.'

Of course,since the film was filmed in 1937, the nature of the reason why the marriage between Louis and Marie was not consummated is danced around.  Louis never says why he can't until after the King dies, and he suddenly announces that things are all right downstairs. The love affair between Marie and Fersen is truncated by her becoming Queen and then the whole being in prison thing.  The film includes a scene between the two of them when Marie is days away from the guillotine. Of course, it never happened but it makes for a romantic and tragic scene.

Verdict:  This film is well worth renting from Netflix or your local library.  Even after 70 years, it stands up. If you have time, make it a double feature with the Sofia Coppola version.  It's interesting to contrast, not only the different styles of film making but also the acting.
Marie Anoinette

Elizabeth Kerri Mahon said…
Amy, I hope that you like it.

Bearded Lady said…
The hair in this film makes me giggle. It is so white! The gowns were gorgeous. great review.
November 11, 2010 at 8:15 AM