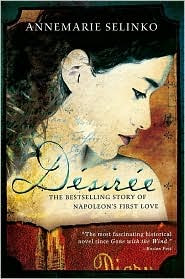 From the back cover:  To be young, in France, and in love: fourteen year old Desiree can't believe her good fortune. Her fiance, a dashing and ambitious Napoleon Bonaparte, is poised for battlefield success, and no longer will she be just a French merchant's daughter. She could not have known the twisting path her role in history would take, nearly breaking her vibrant heart but sweeping her to a life rich in passion and desire.

A love story, but so much more, Désirée explores the landscape of a young heart torn in two, giving readers a compelling true story of an ordinary girl whose unlikely brush with history leads to a throne no one would have expected.

An epic bestseller that has earned both critical acclaim and mass adoration, Désirée is at once a novel of the rise and fall of empires, the blush and fade of love, and the heart and soul of a woman.

My thoughts:  It somehow seems fitting that Sourcebooks would be re-releasing Annemarie Selinko's epic novel of Napoleon's first love this year, since it is the 200th anniversary of the Bernadotte Dynasty in Sweden. In 1810, the Swedish Parliament elected Jean-Baptiste Bernadotte to be the Crown Prince and future King of Sweden as Karl XIV Johan.  His wife was Désirée Clary, whose sister Julie married Napoleon's brother Joseph.  I first read this book when I was about 15 years old.  One of my best friends in high school loaned me a copy that she'd found in a used paperback book stores.  I knew very little about Napoleon apart from the Battle of Waterloo and the plot to assasinate him in Woody Allen's film Love and Death. I remember devouring this book and then eagerly watching the film version starring Jean Simmons as  Désirée  and Marlon Brando as Napoleon on the 4:30 movie. So when I heard that Sourcebooks was going to be re-releasing the book, I was kind of trepidatious about reading it again. Would it live up to my memories?

Yes and no.  It took awhile for me to warm up to the book again, the beginning is very slow and the story didn't really start to move for me until  Désirée  runs away from home to go to Paris to find Napoleon. She's heard rumors about his relationship with Josephine and wants to find out for herself what is going on with her fiancee. For me thats when the story really begins.  The story is told in the first person starting when Désirée is almost 15 years old.  Her brother Etienne has been arrested by accident and  Désirée and her sister-in-law go to plead for his release.   Désirée falls asleep and is awakened by Joseph Bonaparte who escorts her home.  When  Désirée impulsively invites Joseph and his brother Napoleon (or Napoleone as he was known then) it stars in motion a chain of events that ends with  Désirée  being crowned Queen of Sweden.

If this wasn't a true story, it would be pretty unbelievable. The idea of a silk merchant's daughter falling in love with the man who became the Emperor of the French and then marrying a man who would one day become King of Sweden, it seems like an impossible dream, which is exactly what it feels like for  Désirée . She never forgets or lets anyone forget where she came from, it's part of her charm but sometimes you just want to beat her over the head with a stick. At times,  Désirée  can be charming, exasperating, child-like, naive, ignorant, compassionate, and loving. In the end, I couldn't help falling under her spell.

The book is told as if  Désirée  is writing in her diary, so alot of the narration is of events that she had no part in, that she's telling the reader either through dialogue that she hears from her sister Julie or just through straight narration.  Sometimes the story drags because of it, the reader has to wade through a lot of exposition. But then there are times when the story is just exhilirating when she talks about Napoleon and Josephine's coronation, or when she and Napoleon are acting ostensibly as chaperones for her sister and his brother, and Napoleon shares his ambitions with her.  Seeing Napoleon's family through her eyes reveals aspects of their characters that one might not get from a straight biography or if the book were narrated by another.

Désirée  makes some questionable decisions, the biggest one being leaving Sweden after only a few months to go back to Paris.  She tells her husband that she feels that she will ruin things for him because she was not raised to be a Queen,that the etiquette is too stifling for her. What is interesting is that her husband, Jean-Baptiste Bernadotte, who comes from an even more bourgeois family, takes to Sweden and ruling like a duck to water.  She does eventually return to Sweden later on after Napoleon's final defeat, but its hard at times to sympathize with a woman who basically abandons her son for 12 years.

This is an epic novel in every sense of the word, the story sweeps from Marseille just after the deaths of Marie Antoinette and Louis XVI through  Désirée  coronation in 1828.  Along the way, she meets everyone of importance, Fouche, Talleyrand, Germaine de Stael, Josephine, Pauline Bonaparte, and many others. After awhile the reader can't help but be swept away along with  Désirée  as her life changes irrevocably.

Verdict:  I would recommend this book to anyone looking for an epic story about one woman's journey from obscurity to a prominent place on the world stage. It's a sweeping love story, a novel about war and political intrigue. This book is jam-packed.
Desiree Clary Napoleon Bonaparte Royal Family of Sweden

Audra said…
I so need to get this book! My mother read it as a teen and loved it, and was always talking about it was the kind of novel she wished she could write.
October 13, 2010 at 4:00 PM

Elizabeth Kerri Mahon said…
It's a good book Audra. It's long, and the story doesn't start until a good way through but it's nice to have another perspective on the Napoleonic era.
October 14, 2010 at 11:58 AM

Lana said…
I enjoyed seeing Napoleon and his family through Desiree's eyes as well. I thought those sections of the novel (the beginning and towards the end when Desiree is protecting so many of her/Napoleon's family despite their selfishness) the strongest of the novel.

Now you have me excited to watch the movie as well!

Paulette said…
I read this book as a teen and loved it completely.....when the movie came out with Marlon Brando, I was the first in line. I loved the history in the book and was contantly looking things up to verify them. I loved this
book so much I named my daughter Desiree and have been trying to get her to read it ever since.
February 27, 2011 at 1:24 AM