On the Bookshelf - The Courtiers by Lucy Worsley 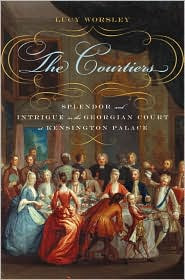 I've been dying to write about THE COUTIERS:  Splendor and Intrigue at the Georgian Court of Kensington Palace ever since I first received the email from the publicity department at Bloomsbury offering me a review copy.  Unfortunately thanks to the USPS, I didn't receive the book until sometime last month even though it was sent to me sometime in July. Seriously Pony Express would have been faster or if they had just tossed it to me across town.

THE COURTIERS by Lucy Worsley is a treasure trove of information about the Georgian Court.  Ms. Worsley knows her stuff as she would since she works at the Palace, which has to be the coolest job ever.  The book is deliciously written with seperate chapters on William Kent, the artist, who painted a gorgeous mural in the palace to poor Henrietta Howard who has the misfortune to be George II's mistress. Misfortune because George II really didn't want to have a mistress. He was madly in love with Queen Caroline but he felt that he ought to have a mistress, so he chose Henrietta who was quiet, deferential, and partially deaf.  On her part, Henrietta was escaping a horrific marriage.  Being the King's mistress and having a place at court kept her safe from her jerk of a husband. After 20 years of being barely tolerated by her lover, and having to listen to the snide remarks of the Queen, Henrietta finally had enough.

Other courtiers featured in the book are George I's mistress and his illegitimate daughter who everyone thought was his mistress, and John Hervey who married one of Queen Caroline's Maids of Honor, had a long affair with Stephen Fox, and possibly a relationship with Frederick, the Prince of Wales.  There's also a chapter on The Wild Boy of Kensington Palace who I had never heard of.  Reading this book made me long to go to Kensington Palace again on my next trip to the UK.  I've been to the Palace several times before, but I think that the next time I will appreciate what I'm seeing more thanks to this gem of a book.  I had hoped to hear Ms. Worsley speak when she was here in October on a brief publicity tour but her talk, sponsored by the Royal Oak society, was sold-out.

However, I still have the book! I've been reading it slowly since I received it because there is so much interesting information that I want to savor it. In many ways, it is a companion volume to Amanda Vickery's BEHIND CLOSED DOORS, as well as Stella Tilyards book about George III and his siblings. Reading this book reminded me of a play that I saw years ago performed by the RSC called THE ART OF SUCCESS about William Hogarth.  Queen Caroline was a character in that play, a charming woman who was much smarter than her husband, which definitely comes across in this book.  Although the book is about the courtiers at Kensington Palace, the book also provides wonderful portraits of George I, George II, and Queen Caroline.  Fillled with photographs, each chapter is also filled with interesting pencil portraits as well.

If you are interested in the Georgian era, whether as a reader or as a writer, I would suggest that you run out and buy a copy of this book immediately!