Guest Blogger Lisbeth Eng on “The Spy Who Loved Me…but was sleeping with the other guy, too” 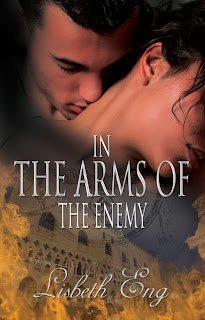 Scandalous Women is pleased to welcome debut author Lisbeth Eng, and fellow RWA NYC member to the blog to talk about female spies and her new release IN THE ARMS OF THE ENEMY, a WWII romance set in Italy.

Isabella Ricci, the heroine of my World War II romance novel, In the Arms of the Enemy, is devoted to her country. She has witnessed the brutal execution of her own brother by the Nazis and will do anything to defend Italy from the occupying German army. An accidental reunion with old school friend Silvia Matteo brings her to a gala party for German officers and Fascist officials. Silvia is a fun-loving party girl (that’s “party girl” as in “let’s have a good time”, not “Fascist Party” girl) and enjoys the company of good-looking, powerful men, regardless of what uniform they wear. Silvia is apolitical and doesn’t know that her friend Isabella has joined the Italian Resistance. Isabella’s commander and lover, Massimo Baricelli, persuades Isabella to attend the gala to attempt to infiltrate the enemy.

At the party Isabella meets and attracts handsome German army Captain Günter Schumann. Massimo encourages his lover to pursue a relationship with the German to see how much information she can induce him to share. When the flirtation between Isabella and Günter leads to intimacy, she is torn between her loyalty to the Resistance, which requires continuing a relationship with the enemy, and feelings of guilt over her faithlessness to Massimo, even though it is he who assigns her this mission of seduction and espionage. Her conscience is further tested when she begins to realize how affectionate and attentive the enemy officer is.

Real life female spies have been viewed throughout history as heroines, traitors and whores. Elizabeth Van Lew was an abolitionist and spy for the Union during the American Civil War. A Southerner, she was shunned by her neighbors for her pro-Union sentiments. Van Lew dressed oddly and used the persona of “Crazy Bet” to cover her activities. Never arrested for espionage, she was rewarded after the war by Ulysses S. Grant with the appointment of Postmistress of Richmond, Virginia. The Confederacy had their spies, too. Belle Boyd “La Belle Rebelle” used her female wiles to charm military information from enemy officers. She was captured, but later seduced, fell in love with, and eventually married Union Captain Samuel Hardinge.

Mata Hari, perhaps the most infamous of female spies, reportedly declared, “Harlot, yes, but traitor, never." Found guilty of espionage against France during World War I, she was executed by firing squad in 1917. And, as if being an exotic dancer and double agent isn’t enough to ruin a girl’s reputation, rumor had it she had been sleeping with high-ranking military officers on both sides of the conflict.

By comparison, Isabella, heroine of In the Arms of the Enemy, is rather tame. Yes, she is sleeping with two men (her Italian boyfriend/commander knows about the German, who remains blissfully unaware of his rival) but her motivation is noble. She sees herself as a soldier, defending her country from Nazi oppression and avenging her brother’s unjust execution. Women, historically precluded from serving in regular armies, have used their charms and their bodies to fight for their countries. Scandalous perhaps, but immoral? You be the judge.

Oh, and if you want to know which man wins Isabella’s heart in the end – Massimo or Günter – you’ll just have to read the book!


An English major in college, Lisbeth Eng has also studied Italian, German and French. Lisbeth is a native New Yorker and has worked as a registered representative in the finance industry for the past 25 years. Her first novel, In the Arms of the Enemy, is available in e-book and paperback at The Wild Rose Press. Lisbeth invites you to visit her at http://www.lisbetheng.com/.
Lisbeth Eng WWII Spies

Autumn Jordon said…
Interesting post. In July, my DH and I visited the International Museum in DC. The area that really caught my attention were the rooms on women spies throughout history. I learned tons on so many brave kick-ass heroines. They were truly shining examples of courage.

Jeanine said…
I can't wait to read the book. Great post about the role of women during war. In my opinion they were just as important as the men on the front lines.
October 20, 2010 at 10:27 AM

Lise Horton said…
I'm thrilled that both your book - and your post - highlight the contributions women have made in the conflicts of the past. WWII-era women worked doggedly, often giving their lives for their country, in numerous capacities (including as ferry pilots, photographers and journalists, factory workers, scientists, nurses and, yes, as spies) and have too long been relegated to the wings in the coverage and history of the "Greatest Generation". Congrats on having embodied that feminine spirit so masterfully in your book, and reminding us that women have always stepped up when their country(ies) needed them!
October 20, 2010 at 11:27 AM

Lisbeth Eng said…
Thank you, everyone, for stopping by and commenting. Ann, I don't know of any specific historical event, which parallels my story, but I'm sure there were other female spies who faced dilemmas similar to Isabella's. The only inspiration I am conscious of was an Italian professor from college who told us intriguing tales of the Italian Resistance during WWII; he lived there at the time. (Though I far as I remember, he didn't mention any spies.)
Please check the "News" page of my website for more blogs, interviews and events to come.
Lisbeth
www.lisbetheng.com
October 20, 2010 at 8:14 PM

Margaret Tanner said…
Hi Lisabeth,
Great blog. Love the 2nd world war era.Unfortunately a lot of brave women who gave their all for the war effort, never got the recognition they deserved. In the Arms of The Enemy is definitely on my to read list.

JeanneD said…
Hey Lisbeth! Congrats on the book and shining a light on the brave women through history. Hope your book does very well. WWII is a really great time period and I hope more books are published in the era. Do you have another WWII book in the wings?
October 21, 2010 at 10:24 AM

Pauline said…
Great points and a most interesting blog! Very much looking forward to reading this book!
October 21, 2010 at 10:32 AM

Lisbeth Eng said…
Thanks again, everyone. Jeanne, I don't have a WWII novel in the works, though I've a few ideas for other historical romances. But I've no idea when I might start writing one. Life is a bit crazy right now and I'm taking a break from fiction writing to focus on my full time job and on book promotion. But when things ease up in a few months, who knows....
Lisbeth
October 22, 2010 at 5:02 PM