The Divine Sarah - The Life of Sarah Bernhardt 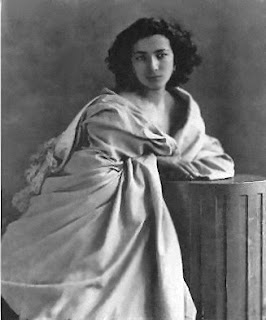 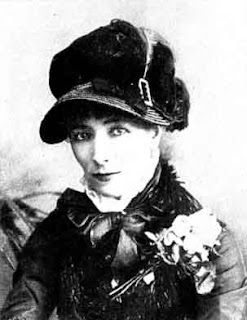 Sarah was not just a talented actress, but triple threat, writing and sculpting were amongst her other talents. She was a dedicated artist keeping a studio in Montmartre where she held court dressed in a white satin pants suit while she worked. Her work was good enough to exhibit, and she would often sell out her work.  During the Franco-Prussian war, she helped turn the Odeon into a hospital, where she added the role of nurse and fundraiser to her list of roles.  Not everyone was a fan, playwright George Bernard Shaw  and novelist Henry James were not that keen on her.  She had a long standing rivalry with the Italian actress Eleanora Duse, and another former friend Marie Colombier wrote a scathing novel about her called The Life and Memoirs of Sarah Barnum. Despite her conversion to Catholicism, Bernhardt was frequently the subject of anti-semitic attacks, caricatured in cartoons as a big-nosed Jewess. No one would ever let her forget her origins, not that Sarah ever denied it. Like Disraeli, she was proud of having been born Jewish which she considered a matter of race, not belief.
By the time she died, attitudes towards acting had changed, but Sarah kept on working.  She had become a national treasure. She is the second most famous woman in France after Joan of Arc. But as Rober Gottlieb points out, her  most enduring legacy is the number of young girls who have been scolded by their mothers, mine included, when they are being overly dramatic that "You're a regular Bernhardt."
Sarah Bernhardt

Leanna Renee Hieber said…
Oh, hail hail to Queen Sarah! She truly was a revolutionary in her work, and in her life. Thanks for sharing such fascinating details about her spirit and her art, I hope she gets the chance to live again in your books!!
October 23, 2010 at 12:37 PM

Elizabeth Kerri Mahon said…
I would to write more about the divine one! She's truly an inspiration for any artist.
October 24, 2010 at 2:44 PM

Hope Tarr said…
Fascinating post. I love stories of self-made women, women who like Sarah were maybe not the most beautiful (by the standards of their day), or the most blessed by birth, but who took Life by the wheel and have that indefinable "It" quality that makes them so irresistible to men and women alike.

Believe it or not, I was one of those little girls whose parents said, "You're a regular Bernhardt." I made the little landing on our living room stairs my stage and would give recitals to my family and friends. Over the years, I must have channeled such dramatics into my books--a good thing as I really am *no* Sarah Bernhardt!
October 25, 2010 at 1:05 PM

Elizabeth Kerri Mahon said…
Awww, Hope, I wish I could have seen your performances. When I was a kid, I too used to perform for family and friends. My fantasy was to one day have my own variety show like Carol Burnett! Sarah certainly inspired me to have my own theater company. It only existed for two years but it was an incredible amount of work. I don't know how she did it for 44!
October 27, 2010 at 12:20 PM

nothing profound said…
Just finished reading Jules Renard's journal. He & Sarah were friends for awhile, and he makes many allusions to her in the Journal. Would"ve been around the time she was appearing in Rostand's plays. Quite a commanding presence.
October 31, 2010 at 1:42 PM

Sankaravelyudhan Nandakumar Nandakumar said…
Srah's palm print was extraordinary with sun line line having a star in the middle with parallel sun and fate line a beautiful head line indicated a brilliant career.
December 23, 2013 at 2:27 AM

IKnowItAll said…
She didn't have gangrene; the knee was causing her pain and she directed surgeons to remove it or she would shoot herself in the leg so they *had* to amputate.
February 14, 2016 at 8:53 AM