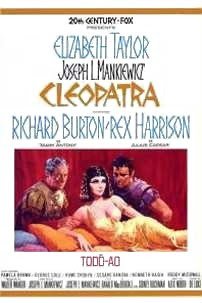 My thoughts:  Pretty everyone, even if they have no taste for celebrity gossip, knows the backstory to the filming of Cleopatra.  It's the film that not only took two years to make, and almost bankrupted the studio, but it is also the film that ended two marriages, and gave the world the love story of Elizabeth Taylor and Richard Burton or Le Scandale as it was known at the time. By the time the movie was released in 1963, the original cast had been let go (Peter Finch was supposed to play Caesar and Stephen Boyd Antony) and the director had been fired.  The film had been delayed because of Elizabeth Taylor's near death experience from pneumonia, and the production moved from the damp weather of England to the sunny climate of Rome.  This is the film where Elizabeth Taylor demanded $1 million dollars in salary, which was unheard of at the time.  The story goes that she asked for so much because she really didn't want to do the movie. By the time filming was done, Taylor had made out like a bandit, not only did she receive the million dollars but also $3,000 a week in living expenses, $50,000 a week for every week the film went over schedule, and 10% of the profits. Oh, and she didn't have to film during her period.  The film ended up costing $35 million dollars, makig it the most expensive movie at that time, and the third most expensive film in history. Although the film made money, it still ended up in the red, and while Taylor and Burton would go on to make more films, the director Joseph Mankiewicz would never make another film again.

Despite having read about this film in various biographies of Elizabeth Taylor and Richard Burton, including the most recent book FURIOUS LOVE, I've never actually seen this movie. This movie is long, I'm talking 'oh my god, is this movie still on?' long. It's four hours and it feels bloated, like when you've eaten too much turkey on Thanksgiving and you fall into a food coma.  I will give the film credit, it does give equal weight to to Cleopatra's relationships with both Caesar and Mark Antony. In fact the director had wanted to release two seperate films, the first ending with Caesar's death on the Ides of March. The production is lush, all that money clearly (at least what didn't end up in Elizabeth Taylor's pocket) ended up on screen, although the set design and the costumes owe more to the 1960's than they do to Ancient Egypt and Rome.

There are so many amazing scenes of spectacle, in particular the scene where Cleopatra arrives in Rome. She enters the city sitting on top of a giant replica of the Sphinx along with Caesarion. It is a stunning visual but I couldn't help thinking about the logistics, like how did they get the Sphinx to Rome? Did they build it there or did they just float it down the Mediterranean? Another fabulous scene is where Cleopatra entertains Antony on her barge.  There is an extended dance sequence with the god Dionysus (Antony's ancestor) and a woman made to look like Cleopatra as Antony drinks too much.

The film is hampered by the fact that there was no shooting script. Mankiewicz rewrote the film as shooting went along which meant the whole film had to be shot in sequence. It almost sounds as if the actors are improvising or just borrowing bits from Shakespeare and Shaw. Elizabeth Taylor plays Cleopatra as a mewing sex kitten in her scenes with Caesar and Mark Antony.  She looks stunning in her costumes but she never quite conveys the majesty or the politcal skills of the last Pharaoah of Egypt. Even when she flies into a rage at hearing the news that Antony has married Octavia, it's more of a minor temper tantrum. The screenplay also turns her into sort of the Lady Macbeth of the Ancient World, coaxing Antony and Caesar into greater ambition, which they enter into reluctantly.

Rex Harrison is rather brilliant as Caesar and Roddy McDowell, saddled with blond hair, plays Octavian as a peevish and petulant schoolboy in the beginning, but one who is incredibly cunning underneath.  Poor Richard Burton is forced to wear tunics that border on the indecent throughout the film, seriously while Taylor wears floor length gowns, Burton shows a great deal of leg (and fantastic ones they are too).  He plays an Antony who is crushed by his relationship with Cleopatra, drinking more and more as the film progressed. He knows that he's lost the respect of the Romans but yet he's powerless to let go of this woman.

Verdict:  This film is worth seeing if only because they don't make movies like this anymore. And it's fantastic to watch as Taylor and Burton fall in love on screen. However, I would suggest that you not try to watch all 4 hours at one time.
Cleopatra Scandalous Women on Film

Unknown said…
Great summary Elizabeth! They indeed don't make them like that anymore.

As amazing spectacle as this film is, it surely did a great disservice to Cleopatra VII Philopater herself, as far as a being a woman of letters and political clout. It very much feeds into the Roman bias history has left us with.

This was somthing I discussed with YA Author Vicky Alvear Shecter recently regarding new Cleopatra book. For those interested in reading, feel free to have a look.

Also, Elizabeth - could you *please* fix that "Three Pipes" link in your blogroll! that most definitely does not lead to my site - which has been featuring yours in its blogroll from day 1 :)

Vicky Alvear Shecter said…
I am embarrassed to admit that I have never seen the complete film. I enjoyed your take on it. I haven't been able to watch Cleo movies since the day I tried to watch the movie based on George Bernard Shaw's play featuring Vivian Leigh as Cleo. Five minutes into it and I was throwing pillows at the TV. By the time the real Cleo met Caesar, she had RAISED an army to overthrow those who tried to overthrow her, then outwitted her enemies by sneaking in to meet with Caesar privately. Yet Vivian Leigh played her (as the role was written) as a slightly daffy, pretty little "kitty." Argh. The real Cleo was more like a roaring lioness if you ask me!

Lidian said…
I have to admit that I have never seen this movie, despite having read just about every Elizabeth Taylor bio there is! You've made me want to rent it over the holidays - it sounds like the perfect background movie to run while playing Scrabble (and eating chocolate liqueurs!)
September 12, 2010 at 8:39 PM

It is so over the top! I'm no Cleo expert but my understanding was that monarchs were not allowed to enter Rome(unless paraded as prisoners) and that Caesar had her tucked away in his Villa - which is quite the opposite of what you see in the Taylor film :)

You can watch the sequence on youtube these days.

Vicky/Lydian, I agree that it is worth seeing for the spectacle alone. The Cleopatra barge scene is equally riveting as is the scene where Caesar formally installs Cleopatra as Queen. Although as we all know, Cleopatra married her other brother after the first one's death. They also cut out her three children by Mark Antony.
September 13, 2010 at 11:47 AM