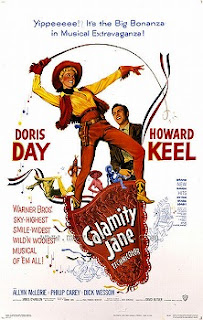 The Plot:  This film is loosely and I do mean loosely based on the life of Calamity Jane (Martha Jane Canary). In this movie musical Calamity is a loveable scamp of a tomboy.  When the film opens, Calamity rides into Deadwoodon the stagec oach. When she claims that she shot over 30 'Injuns' she threatens to fill the person who disbelieves her story full of lead! The owner of the local saloon and hotel sends for a beautiful woman to appear on the stage, the latest "woman" turns out to be a man named Francis Fryer, who reluctantly does a stage act in drag. When the ruse is discovered, the men are pissed off, but Calamity vows to get them the one woman they are all drooling over: singer Adelaide Adams who is performing in Chicago or 'Chicagee' as she calls. Wild Bill Hickok bets Calamity that if she can get Adams to Deadwood to perform, he will come to the opening dressed as a Sioux squaw lugging a papoose.

Calamity goes to Chicago, where she gapes and gaws at the sight of the women in their finery on the streets of the city.  Adelaide gives her all her costumes to her maid, Katie Brown, since she's off to Europe as fast as she can get out of the 'Windy City'.  Katie, who longs to be on the stage, tries on one of the dresses and starts to sing. When Calamity walks in, she thinks that Katie is Adelaide, and convinces her to come to Deadwood. Katie, agrees despite her better judgement because it means that she can fulfill her dream of being on stage. The ride back to Deadwood is rocky, as they are chased by Indians but Calamity saves the day.  When Katie gives her first performance, she's understandably nervous, particularly when Francis Fryer recognizes her.  Tentatively she starts to sing until Calamity says she didn't sound that way in Chicago. Katie bursts into tears and admits that she is not Adelaide Adams. Everyone present is on the verge of rioting, but Calamity defends Katie by firing a shot in the air. They allow Katie to carry on, and her performance wins them over. On the balcony above, Bill Hickok, dressed as an Indian woman, ropes Calamity and hangs her high and dry.

Calamity and Katie become fast friends, and Katie moves into Calamity's cabin in the woods after giving it an Extreme Makeover from the Deadwood Kmart (Frankly I'm amazed that Katie didn't run all the way back to Chicago once she got a look at the rustic cabin). Of course, Wild Bill and Lieutenant Danny Gilmartin, both fall for Katie pretty quickly.  Katie, bless her heart, knows that Calamity is madly in love with Danny, and tries to steer him in her direction. Both men escort the women to a party at Fort Scully. Calamity is a big hit with the men when they see her dressed up as a woman but she becomes jealous after she catches Danny kissing Katie. Hurt and angry, she storms home where she throws all of Katie's stuff into cases. Calamity later confronts Katie at The Golden Garter while she is performing, and warns her to get out of town. But Katie is not intimidated. She takes a gun, and tells Calamity to hold up her glass. A gunshot finally rings out, and the glass falls from Calamity's hand, but it wasn't Katie who fired; it was Bill, who lets Katie take all the credit. Humiliated, Calamity storms out. But before she can mount her horse, Bill grabs her, throws her onto his horse-drawn cart and rides off.

In the woods, Bill tries to talk some sense into Calamity, and reveals that he shot the glass out of her hand to teach her a lesson. Calamity is heartbroken, while Bill admits that he was in love with Katie. Calamity tells Bill there won't be another man like Danny, not for her, however she and Bill end up kissing, and she realises it was him she loved all along. And when Bill asks her what happened to that lieutenant she was telling him about, she answers "I've never even heard of him."

The next day, Calamity sings the hit song "Secret Love" before she rides into town, but when she talks to the people, they just ignore her. She finds that Katie has left for Chicago. Calamity leaps back onto her horse and chases after the stagecoach, eventually catching up with it. She tells Katie that she isn't in love with Danny and is marrying Bill, and the two women become friends again. Of course everything turns out A-Okay and a spectacular double wedding ensues. When Bill finds Calamity's gun under her wedding dress, she jokes it's just in case any more actresses roll in from Chicago. The movie ends with the two happy couples riding out of town on the stage.

My thoughts:  This film is a hoot and a half.  It has nothing at all to do with the historical Calamity Jane and everything to do with at least some of the myths that spread about her in the late 19th Century (for a more accurate portrayal watch the HBO series DEADWOOD).  It reminded me of some of the Deadwood Dick dime novels that were a contributing to factor to Calamity's popularity. One of the funniest things in the whole movie is the depiction of DEADWOOD as a town full of men.  No brothels, just one bar that doubles as a hotel and the theater. Certainly no Al Swearingen or Seth Bullock in this film.  All the women seem to live at the Fort with the Army.

Doris Day gives a charming but broad performance as Calamity Jane, although she plays the role with gumption, she's not quite believable as a hoyden, although she has tremendous energy.  The film owes a great deal to the success of the Irving Berlin musical ANNIE GET YOUR GUN which was filmed by MGM starring Betty Hutton as Annie Oakley and Howard Keel as Frank Burns.  In fact Howard Keel plays Wild Bill Hickok in this film. In both films, the heroines realize that you can't get a man with a gun, although Annie Oakley is more feminine than Calamity.  This Calamity doesn't cuss and drink like the real Calamity.  She doesn't drink anything harder than root beer, but she certainly tells tall tales like the historical Calamity.  She's most effective in the scenes where Calamity discovers that Danny Gilmartin and Katie are in love, she tends to overact a little too much as the more tomboyish Calamity.

Poor Howard Keel doesn't have much to do as Wild Bill except trade tame barbs with Calamity, look handsome, and attempt to keep her out of trouble. He's a frontier Mr. Knightly to Calamity's Emma in a way. We rarely see him gambling, and there is certainly no whoring in this film.  The weakest part of the film is the love story between Katie and Danny, it happens way too quickly. It would have been nice to see him trying to court her on the sly.  Danny is also way to cavalier about Calamity's feelings, which makes him less sympathetic as a character.  I did like Allyn McLerie as Katie, she's delightful in her scenes in Chicago when Adelaide tells her bluntly that she'll never make in on the stage, and charmingly vulnerable and awkward when she gets up on stage for the first time. One of the best scenes is when she thinks when she first meets Calamity that she's a dude. Since she and Calamity had forged such a friendship, I would have liked to have seen Katie try to apologize and explain about what Calamity saw with Danny. It's an abrupt shift from Calamity tossing her out to the scene at The Golden Garter. Also, it would have been nice to have a scene where Katie helps Calamity dress like a woman for the first time, although the scene where Calamity comes in covered in mud ruining her dress is a classic.

Verdict:  Although the film has nothing to do with the real Calamity, it's nevertheless a fine fluffy piece of entertainment.
Calamity Jane Wild Bill Hickok

As amusement (a=no; muse=thinking) goes, this film is one of the very best, IMHO. Younger readers may need this;