Scandalous Women in Fiction and Giveaway: RIVAL TO THE QUEEN 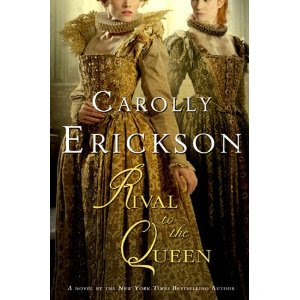 In honor of Elizabeth I's birthday today, I'm giving away a copy of Carolly Erickson's new novel RIVAL TO THE QUEEN which is due to be published by St. Martin's Press at the end of this month. From the Publisher:  Powerful, dramatic and full of the rich history that has made Carolly Erickson’s novels perennial bestsellers, this is the story of the only woman to ever stand up to the Virgin Queen— her own cousin, Lettie Knollys. Far more attractive than the queen, Lettie soon won the attention of the handsome and ambitious Robert Dudley, Earl of Leicester, a man so enamored of the queen and determined to share her throne that it was rumored he had murdered his own wife in order to become her royal consort. The enigmatic Elizabeth allowed Dudley into her heart, and relied on his devoted service, but shied away from the personal and political risks of marriage.

When Elizabeth discovered that he had married her cousin Lettie in secret, Lettie would pay a terrible price, fighting to keep her husband’s love and ultimately losing her beloved son, the Earl of Essex, to the queen’s headsman. This is the unforgettable story of two women related by blood, yet destined to clash over one of Tudor England’s most charismatic men.

My thoughts: This book is a brisk, lively read but anyone who has read Victoria Holt's MY ENEMY THE QUEEN  or looking for a juicy historical novel promised by the title is bound to be disappointed by this book. In Erickson's hands, Elizabeth I is a jealous, cantankerous shrew, while Robert Dudley is the Elizabethan equivalent of Errol Flynn.  Everyone is a caricature including Lettice's father who is reduced to stern Puritan and an invented sister who serves as the villainess of the story, popping up to ruin Lettice's happiness. The biggest weakness of the book is Lettice herself who seems to go blithely through her life with no self-reflection. It's all "La La, maid of honor to the Queen, la la married to Deveraux, had children, la la, who isn't Robert Dudley a hunk! la la now we're in love and blissful, la la, oops he's dead but I have Christopher Blount to keep me warm la la my son is plotting against the Queen, bad Robin la la." Much is made in the beginning of the book of Lettice thinking that she and her siblings are royal through Mary Boleyn's liaison with Henry VIII but then its dropped. It never manifests itself in any kind of behavior.  Tracy Borham describes Lettice in ELIZABETH'S WOMEN as vain, grasping and snobbish and it would have been nice to see just a few of those traits manifest themselves in the book. The Queen takes against Lettice within minutes of meeting her for no apparent reason other than she's pretty.

Because the book is so short (292 pages), 8 of Lettice's siblings fall by the wayside as if they never existed, as do 2 of Lettice's children by Walter Deveraux. For some reason, Erickson fudges the ages of Lettice making her 6 years older than she actually was when she married Deveraux.  Erickson places Lettice at events she probably wasn't at such as Amy Dudley's inquest, just so she can jump up and defend Dudley. The most interesting part of the book takes place in Frankfurt where the Knollys have settled during the reign of Mary I.

Verdict:  If one is looking for a light quick read this book is for you but I would suggest that you pick up a copy of Holt's MY ENEMY THE QUEEN as well.

Here are the rules: This giveaway is only available to American and Canadian readers. The giveaway is open from today until 12 p.m. on Monday September 13th. The winner will be announced on Tuesday, September 14th.

FleurDeMar said…
Carolly Ericson is always good for a quick read - even though some of what she writes is sort of out there in comparison to reality.

Linda said…
Wow, what a review, but I really appreciate your honesty. My Enemy the Queen is an all-time favorite of my granddaughter's, but I've never read any thing about Lettice. Knowing it may be a disappointment, I'd still like to be entered for the giveaway. Thanks.
lcbrower40(at)gmail(dot)com
September 7, 2010 at 12:18 PM

TIffany said…
I would definitely like to read this - thank you very much for your frank review - I will have to check it out myself!

Misfit said…
I have to wonder why Erickson keeps writing these *historical entertainments* when she keeps getting scorched for them. I liked My Enemy the Queen a lot. Please don't enter me, her last book on Mary Q of Scots was quite enough :)
September 7, 2010 at 12:37 PM

Rachel said…
This looks great- thanks for the giveaway!

Elizabeth Kerri Mahon said…
Misfit, I find it interesting that she calls them "historical entertainments" instead of historical fiction. I have read and enjoyed her nonfiction biographies for years. Her book OUR TEMPESTOUS DAY is one of the best general biographies of the Regency that I have ever read. While I managed to read RIVAL TO THE QUEEN in a day, I kept wishing for more depth. The book is quite short and could have benefited from a good 60 more pages at least for the last section about her son, the Earl of Essex. For someone who knows nothing about the period, it's a good start but for anyone who knows anything about the Tudor period, it's bound to disappoint.
September 7, 2010 at 12:48 PM

Amy said…
OK now I have to read this...
Please enter me in the giveaway!

Amanda said…
Thanks for the giveaway!!

Elizabeth Kerri Mahon said…
I hated giving this book a mediocre review. I so wanted it to be better than it was. To her credit, Erickson doesn't fall into the trap of making Lettice a total bitch, the way some authors have. There should be a middle ground between this nicer than nice portrayal and the cold-hearted bitch.
September 7, 2010 at 4:35 PM

Victoria Lamb said…
Highly unlikely, I agree, that Lettice would have been at the inquest into Amy Robsart's death. Not least because Amy was indeed murdered, and the facts hushed up. A few years ago, a British historian - Chris Skidmore - found the original coroner's report among some other Tudor papers, and recently published a book on the topic. Apparently, Amy Robsart had two large holes in her skull. This never came to light at the time, very possibly because the foreman of the jury happened to be an employee of Dudley's. Not that Dudley necessarily organised her death, of course. It could have been any number of people, for any number of sinister reasons. But it was no accident.

A pity you don't rate RIVAL TO THE QUEEN. I shall get hold of a copy anyway, since I'm writing a Tudor historical myself featuring both these problematic ladies. Always interesting to see other versions. Thanks for posting the review.
September 7, 2010 at 8:34 PM

Elizabeth Kerri Mahon said…
I haven't gotten a copy of Chris Skidmore's book yet but I do want to read it. I would be interested in hearing what you think of the book. There is no mention in Erickson's book of the idea that Robsart had breast cancer which is one theory that has been thrown about over the years, that she committed suicide because of it. But since she had two holes in her skull, it was clear that she was murdered.
September 8, 2010 at 9:58 AM

DeAnna Cameron said…
Historical entertainment? That's a term I haven't heard before. Interesting....
Please enter me, and I'm delighted to become a follower, too :-)
September 8, 2010 at 2:04 PM

Nicole C. said…
I would love to read this book.

Melisende said…
Elizabeth, looking forward to reading this - any ideas when it will be released in Australia?
September 11, 2010 at 9:33 PM

Elizabeth Kerri Mahon said…
Hi Melisende, no I have no idea when it will be released. St. Martin's is the publisher here in the States, and I don't know if they are going to publish it overseas or if it has been sold to another publisher. I would guess though that probably 6 months after it is released here.
September 12, 2010 at 12:25 PM

Aik said…
I'd love to win this book!