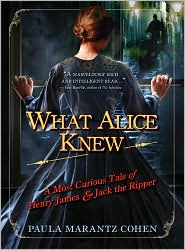 From the back cover:  Under Certain Circumstances, No One Is More Suited to Solving a Crime than a Woman Confined to Her Bed
An invalid for most her life, Alice James is quite used to people underestimating her. And she generally doesn't mind. But this time she is not about to let things alone. Yes, her brother Henry may be a famous author, and her other brother William a rising star in the new field of psychology. But when they all find themselves quite unusually involved in the chase for a most vile new murderer-one who goes by the chilling name of Jack the Ripper-Alice is certain of two things:

No one could be more suited to gather evidence about the nature of the killer than her brothers. But if anyone is going to correctly examine the evidence and solve the case, it will have to be up to her.

My thoughts: I was very intrigued with Sourcebooks offered me the chance to review WHAT ALICE KNEW. I've read Paula Marantz Cohen's contemporary books JANE AUSTEN IN BOCA, and JANE AUSTEN IN SCARSDALE, and enjoyed them immensely. The idea of the Jack the Ripper murders being solved by Alice James and her brothers sounded too interesting to pass up. I'm not a Ripperologist by any means but I've taken Donald Rumbelow's Ripper Tour in London several times, and I've seen FROM HELL and MURDER BY DECREE. So I'm familiar with the players involved with the story.

WHAT ALICE KNEW is a fascinating book. This is not a conventional historical mystery novel, although the Ripper murders are important to the story, it is the relationship between Alice and her brothers that really grabbed me. Alice is an invalid and has been for most of her life. She lives in London with her longtime companion in what used to be referred to as a 'Boston Marriage.' At the time of the Ripper murders, while Henry James is a successful author, he is by no means as successful as he would like to be. He's envious of the success of other writers such as Wilde and Samuel Clemens (who makes an appearance in the book), writers who he feels are not as talented or hard-working but who seem to sell more books. William James is the oldest of the siblings and a noted psychologist and philosopher. But all three have in some ways been scarred by their upbringing which Marantz-Cohen touches on slightly. Henry James Sr. wanted all his children to do something with their lives, to be peculiar. He felt that it was better to be an interesting failure than to be a middling success.

The family dynamics come into play while they are involved with trying to find the who is the Ripper. Henry is the more social of the trio, and more at ease in society, while William has the more incisive mind. Alice's role as she puts it, is to take what both Henry and William find out and to put it all together.  Marantz-Cohen manages to evoke 1880's London without dumping too much information or description on the reader. If I hadn't known that this was her first historical novel, I would never have guessed. She has a very assured way of writing, equally at home writing about the London social world and the East End of London where a great deal of the action takes place.  John Singer Sargent and his sister, Ellen Terry and Walter Sickert all make appearances in the book but I was intrigued by the characters that are probably fictional, the Abrams family who play a role in finding out who the killer is.

From what I've read about Henry, Alice and William James, Marantz-Cohen captures their personalities perfectly. Reading this book almost made me want to go back and dig out my battered Penguin copies of WASHINGTON SQUARE and DAISY MILLER.  Anyone who knows anything about Jack the Ripper will probably be disappointed by who Marantz-Cohen fingers as the murderer, although she throws a few red herrings into the mix to keep the reader guessing. But as  I mentioned who the Ripper turns out to be, is besides the point. It is the relationship between the siblings, as old rivalries flare up, and loyaltie are questioned, that make the book so fascinating.

Verdict:  For a first time historical novelist, Paula Marantz-Cohen's WHAT ALICE KNEW, is a riveting look at the relationship of William, Henry and Alice James with a little mystery thrown in. Historical fiction lovers will enjoy the book but mystery lovers may find the resolution a little unsatisfying.
Alice James Jack the Ripper