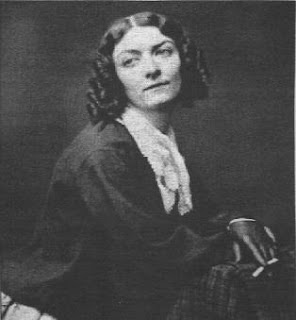 In the 1850's Lola Montez decided to reinvent herself as a lecturer and her most popular lectures were about beauty. In 1859, Lola decided to capitalize on her success by publishing her beauty tips as THE ART AND SECRETS OF BEAUTY. The first New York edition sold 60,000 copies in it's first few months and it has been reprinted twice in America since 1970. French, British, and Canadian and French Canadian editions came out, and several translations done. The French Canadian version alone sold 45,000 copies. The volume, which is a slim 135 pages contains practical hints on beauty and hygiene, the advice remains remarkably undated.

From the introduction, "My design in this volume is to discuss the various Arts employed by my sex in the pursuit of this paramount object of woman's life. I have aimed to make a useful as well as an entertaining and amusing book. The fortunes of life have given to my own experience, or observation, nearly all the materials of which it is composed. So, if the volume is of less importance than I have estimated, it must be charged to my want of capacity, and not to any lack of information on tho subject of which it treats."

Lola recommended that women make their own beauty treatments instead of relying on those bought in stores, since they might contain harsh chemicals that were damaging. How she would have loved stores like Lush and The Body Shop where everything is organic and made with as few chemicals as possible. In her book, she provided formulas for skin creams, hair washes, waxing, and the like. One of her beauty treatments involved placing slivers of raw beef on your face before bed to prevent wrinkles, and using the fat of the stag to keep the form elastic. To prevent baldness, she suggested a pomade of rosemary and nutmeg. She even included her own formula for tooth powder and suggested that people brush after every meal. Here is her recipe to get rid of pimples:

There are many kinds of pimples, some of which partake almost of the nature of ulcers, which require medical treatment ; but the small red pimple, which is most common, may be removed by applying the following twice a day
Sulphur water. 1 oz.
Accetatcd liquor of ammonia .... J oz
Liquor of potassa 1 gr.
White wine vinegar 2 oz.
Distilled water 2 oz.

These pimples are sometimes cured by frequent washing in warm water, and prolonged friction with a coarse towel. The cause of these pimples is obstruction of the skin and imperfect circulation.

If you would like to increase your bust, Lola had a formula for that as well. (If anyone wants to try this at home, let me know if it works!)

Softly rub the mixture on your bosom for five or ten minutes two or three times a day.

Lola was ahead of her time in many ways. She recommended fresh air, exercise, moderation in all things, and scrupulous cleanliness were the hallmarks of her beauty regimen. She also recommended that women abstain from alcohol but also coffee and heavy foods (no mention of tobacco, Lola was a heavy smoker). One of her many suggestions was that women wear light unencumbered dress, particularly for young girls whose bodies were still developing. That must have been a blow to the corset industry. Unfortunately, not many women took that bit of advice! A regular tepid bath was advised with bran to renew the skin and body.

She also wrote 50 "hints to gentleman" which were all tongue in cheek, outlining what a man should not do to win the heart of a woman. Here are jsut some of the hints to give you an idea:

Rule #1:  To make a woman fall tremendously in love with you, a man must make himself as big a fool as possible, in order to ensure the most speedy and triumphant success.

Rule #2: A guy will be a big hit with women if he pretends not to admire any particular woman, but claims that he loves and adores all women; which he can easily accomplish by staring insultingly at every pretty woman he meets. (I think we have all met men like this in our lives!)

RULE #3:  A man should boast that he has no higher ambition in life than merely to render himself agreeable to women.

Rule #4:  Men should pretend to be effeminate and add a lisping softness in their speech. It will go a great way towards charming a woman. They should only talk about balls, parties, fashions and the opera.

Rule #5:  A man should wear a lot of jewelry; if they don't have any of their own, borrow it, or get it some other way. (Apparently a number of rappers have read this chapter!).

Rule #6: Remember that faint heart never won fair lady yet, so men should push their suit with the determination and vehemence of an army of soldiers storming a fort. Women like men of courage, so a guy should entertain women with a running commentary of the number of men they've picked fights with at at parties and bars.

You can read the whole book over at Google Books.
Lola Montez Beauty Tips

Elizabeth Kerri Mahon said…
It's a very interesting book, particularly the tips for gentlemen. I laughed out loud many times reading those.
September 1, 2010 at 12:11 PM

Elizabeth Kerri Mahon said…
I'm glad! You know, I've read several biographies of Lola, but this is the first time that I've read one of her books. It's amazing how modern it is. I was just thinking of how great Lola would have been on reality TV. Of course, she'd have to have her own show, she definitely wouldn't have wanted to share it with anyone. But imagine the fireworks.
September 1, 2010 at 4:05 PM

Elizabeth Kerri Mahon said…
That would be awesome! Have you ever seen the Max Ophuls film?
September 5, 2010 at 1:02 PM

DeAnna Cameron said…
Great recommendation, Elizabeth! Ophuls does an amazing job. I love how the film takes aim at the practice of lurid promotion with the circus scenes. And Martine Carol is tres magnifique!
September 10, 2010 at 1:17 PM

Rachel said…
swallow's nest in an edible gel form is supposed be good for the skin too. it gives that clear and pasty skin that we all love.

it's mad expensive. my brother and i bought some for my mom for her birthday. it was like 400 bucks for like a 6-8 oz jar. Luckily we finally found the one of popular brand online (hongkong-bird-nest.50webs.com/index_e.htm and http://www.euyansang.com/)

dad said it's really popular in indonesia. that a guy has to climb a high mountain to get the nest. that's why it's so expensive.

i mean why doesn't the dude just look for the fabled korean swallow king, capture it and let it lay eggs full of gold! then, he wouldn't have to work so hard and climb them high mountains.
September 19, 2010 at 11:17 AM

Unknown said…
A Lola reality show would be amazing and you have very beauty tips describe here for how to protect the skin.
surgery
September 23, 2010 at 8:32 AM

paresh97 said…
originally, these compounds were referred to as Vitamin F, as an essential nutrient for any healthy body. However series of experimentation and theories caused reclassification of these compounds as fats. Due to the need of the human body to have these acids, they have rightfully been termed as “essential,” partly in order to prevent people from deeming them negative due to their “fat” status.
===========
Beauty Tips
December 16, 2010 at 2:16 AM

Unknown said…
I want to try some natural alternatives for enhancing my beauty. When I was young, I never tried any organic remedy for my skin. This time, I want to try it for maintaining my healthy skin. Last week, I got a restylane. NJ is known for this kind procedure, so this is my first choice for finding a surgeon.
March 7, 2011 at 2:11 AM

Charles said…
I recently came across your blog and have been reading along. I thought I would leave my first comment. I don't know what to say except that I have enjoyed reading. Nice blog. I will keep visiting this blog very often.
Restlyane Tustin
June 29, 2011 at 9:34 AM