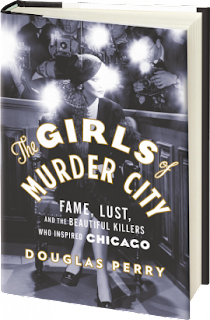 Chicago in the nineteen twenties conjures up names like Al Capone, Eliott Ness, Leopold and Loeb, Dion O'Banion but what about the women? Chicago was nicknamed "Murder City," but some of its most prominent citizens were those sitting on "murderesses row" in the Cook County jail. And its two most famous residents were Belva Gaertner and Beulah Annan. Anyone who has seen the 2002 movie musical Chicago will known these women as Velma Kelly and Roxie Hart. Both were imprisoned in the Cook County jail for killing their men (though in both cases it turned out that it wasn't their only men). Belva Gaertner was a three-time divorcee, who had once been a show-girl named Belle Brown. Recently divorced from millionaireWilliam Gaertner, she killed her boyfriend Walter Law and left his body sprawled in the front seat in of her car, a bottle of gin and a gun with three shots fired lying beside him while she made her way home.She was later found at her apartment, with blood-soaked clothes on the floor. Belva confessed that she was drunk, but couldn't remember what happened.

Beulah Annan, on the other hand, was a small-town Southern girl, married to a schlub, who worked as a mechanic at a garage.  Beulah met Harry Kalstedt at the laundry where she worked. It wasn't long before two began having an affair.  According to her initial story, she and Harry had been drinking wine that Harry had brought over but soon got into an argument. There was a gun on the bed and both reached for it, but Beulah got it first and shot Harry in the back. She then sat drinking cocktails and playing a record, "Hula Lou," over and over for about four hours as Harry lay dying on the floor. It later came out that if she had called for help earlier, Harry would have lived. Both women were flat out guilty, but in Chicago, whether they would be convicted was another story entirely.

The women would end up famous through the columns of 'girl' reporter Maurine Watkins, the first woman hired by the Chicago Tribune as a police reporter. Although their story took place ninety years ago, all you have to do is pick up an issue of Vanity Fair or turn on TMZ or TRU TV to see that our appetite for celebrity crime and celebrities who commit crimes has not abated one bit. Whether its the call girl who took down Eliot Spitzer, Tiger Woods many mistresses, or Charlie Sheen's mug shot, the public can't get enough.

I have long been obssessed with the 1920's and I couldn't wait to read this book. Reading Douglas Perry's fabulous new book "THE GIRLS OF MURDER CITY" made me one wonder why no one has written a book about these women before. Perry has written a page turning, highly entertaining ride through the spring and summer of 1924. Part true crime, part pure gossipy fun, THE GIRLS OF MURDER CITY book perfectly captures the white hot heat, glamour and notoriety of Jazz-Age Chicago. Reading this book I could hear echoes of Ben Hecht and Charles McArthur's play THE FRONT PAGE in its pages. Beautiful women, grandstanding lawyers, and a voracious public eager for any little tidbit about "Beautiful Beulah" and "Stylish" Belva. If there had been a 24 hour news channel, these women would have devised a way to keep their faces before the media. Whenever it looked like coverage was slipping, both would devise ways to get back on the front page, Belvah took up religion and Beulah claimed to be pregnant.

Murder particularly by women seemed to have become an epidemic. People blamed alcohol and the loosening of morals after the Great War for turning respectable women into murderesses. Despite Prohibition, alcohol consumption had actually increased. Considering what was in the alcohol they were drinking, it's no wonder these women went a little insane! The primary ingredients seem to be made up of chemicals that wouldn't be out of place in paint thinner.The public was shocked that the majority of women accused of murder in Illinois got off. All male juries (women weren't allowed to serve in Illinois until 1939, nineteen years after women received the right to vote) were reluctant to convict women of murder especially if they were young and pretty.But what if you weren't young and pretty like Beulah or had a rich husband like Belvah?

Perry weaves in the story of several other women including Sabella Nitti, an Italian immigrant and Kitty Malm nicknamed "The Tiger Girl" by the newspapers. Neither woman was particularly attractive, Sabella barely spoke English. For women like Kitty and Sabina, justice turned a blind eye. Newspapers called Sabella "a dirty immigrant" among other less attractive epithets. She was convicted in the papers long before she was convicted by a jury, receiving the death penalty proving that justice was definitely different for the rich and photogenic, then the poor and ugly. Belvah takes both women in hand and gives them an EXTREME MAKEOVER: COOK COUNTRY style, teaching them how to dress, wear their hair, make-up, how to conduct themselves in court. THE GIRLS OF MURDER CITY is filled with fascinating stories of women like these, who might have been just footnotes in history until Perry.

What I found even more fascinating then the stories of Beulah and Belva, were the stories of the women reporters who covered the story, Maurine Watkins, Genevieve Forbes, and Ione Quimby. These women not only had to fight for stories, but also faced constant sexual harassment from the male reporters they worked with. Watkins story in particular is fascinating. Almost pathologically shy, she had planned on getting a graduate degree in religion when she took a playwrighting class. Convinced that she wanted to write, she headed to Chicago where she ended up working for The Chicago Tribune. An old-fashioned girl who didn't smoke, drink, bob her hair or wear short skirts, Maurine nevertheless had a keen eye. She was one of the few reporters not to be taken in by either Beulah or Belvah, lacing her reports with a sardonic wit that didn't seem match up with her sweet face. She couldn't believe that people were falling for their act, that men sent flowers to the jail, Beulah once even received a steak dinner from an admirer.

Unlike their fictional counterparts, Beulah and Belvah ultimately discover that crime doesn't pay. Both women found themselves bumped off the front page by an even bigger story, Leopold and Loeb, the two teenage joy-killers from respectable, wealthy Chicago families.