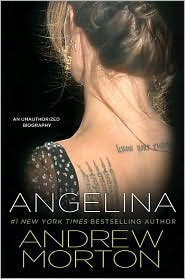 Dear Mr. Morton, I first became aware of you when I purchased your first book on the late Princess of Wales, DIANA'S DIARY. And of course, I read your international bestsellers, DIANA, HER STORY and the unexpurgated version published after her death. Sadly, I have not found your subsequent unauthorized biographies as compelling. Not even your book on Monica Lewinsky which was written with her cooperation. Somehow you managed to make Bill Clinton and that whole sordid business boring. Now you have written an unauthorized biography about Angelina Jolie entitled appropriately enough ANGELINA.  I'm afraid that I'm going to have disagree with the LA TIMES that this book keeps you up at night, with your blood racing. Frankly, I accidently left this book (I'd taken it out of the library) at the Lincoln Center Barnes & Noble, and I probably would have left it there if I weren't going to be liable for paying for it as a lost book.
Perhaps it's the fact that with your first book you have the cooperation not just of Diana's friends but also with the Princess herself that made the book so compelling, also the backstory of the writing of the book, how tapes were smuggled out to you. There is nothing so compelling about this book. The reader never gets the sense as to why Angelina is like kryptonite to men, why they are drawn to her. Is it the bad girl persona? Or is that they sense the little girl who felt abandoned by both parents?
In fact the most interesting parts of the book are not about Angelina at all but about her parents Jon Voight and Marcheline Bertrand. I almost wish you had just written a biography about Jon Voight, although I understand that no publisher is probably going to offer you the huge advance that you probably got for writing this book. I would have liked to have read a little bit more about their courtship. You dismiss it in a few brief sentences but then you drop the bombshell that Marcheline was torn between Voight and Al Pacino. WTF? Who told you that, a unicorn? You don't back up that statement at all, other than to say that Pacino was the unrequited love with her life, along with apparently Mick Jagger.
The person I felt sorriest for reading this book was Voight. He clearly tried to be a good father to Jolie and her brother despite cheating on their mother. The impression I got from your book was that Voight never wanted a divorce, but Bertrand froze him out after discovering the affair. The book comes alive when it deals with Jolie's relationship with Voight and his with Bertrand. I had no idea how similar Voight and Jolie are, which would explain why they have such a hard time getting along. I would love to have heard your thoughts about how Voight went from being such a liberal to supporting McCain and Palin during the last election. It's clear that Bertrand was just repeating a pattern that had started with her mother, living vicariously through Bertrand and then Bertrand through Jolie. Three generations of women who were frustrated that they never became the big stars they thought they should have been. At the end of the book, at Marcheline's funeral, you quote something that actor and teacher Lee Strasberg said about her, applying that he was there at the funeral, which would have been impossible unless they had a seance since he died in 1982.
I sense that you became interested in Angelina because of the parallels between her and Diana. Both came from broken homes, and had tortured relations with the parent  who left, had strange and strained relationships with their brothers, became world famous while young, became involved with charity work and learned to manipulate the press. I'm amazed though that you didn't play those parallels up more. There are no huge bombshells in this book, at least not in regards to Angelina. I began to find the constant comments from pyschiatrists who have never treated Angelina boring after awhile, primarily because they repeated the same mantra, Angelina has a hard time bonding and trusting people because of her abandonment issues. Also I would have liked a little more analysis as to why people like Timothy Hutton put up with her playing him the way she did. Were they attracted to each other because they were both second generation actors who won Academy Awards very young, and have struggled to match their earlier success? Most people have suspected that Brad Pitt, if not physically unfaithful while he was married to Jennifer Aniston, was emotionally unfaithful. The book is a fast read I'll give you that. I managed to finish it in two days although I skimmed quite a bit of the parts of the book where I already knew information from reading various interviews that Angelina has given over the years.
Here are some interesting tidbits that I did learn from the book:
Verdict:  A miss unless you are a huge Angelina Jolie fan.
Andrew Morton Angelina Jolie