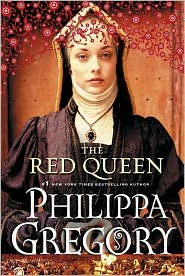 To celebrate the release date of Philippa Gregory's wonderful new novel about Margaret Beaufort, Henry VII's mum, the lovely people at Simon and Schuster have given me a copy of the book to giveaway!

Heiress to the red rose of Lancaster, Margaret Beaufort never surrenders her belief that her house is the true ruler of England and that she has a great destiny before her. Her ambitions are disappointed when her sainted cousin Henry VI fails to recognize her as a kindred spirit, and she is even more dismayed when he sinks into madness. Her mother mocks her plans, revealing that Margaret will always be burdened with the reputation of her father, one of the most famously incompetent English commanders in France. But worst of all for Margaret is when she discovers that her mother is sending her to a loveless marriage in remote Wales.

Married to a man twice her age, quickly widowed, and a mother at only fourteen, Margaret is determined to turn her lonely life into a triumph. She sets her heart on putting her son on the throne of England regardless of the cost to herself, to England, and even to the little boy. Disregarding rival heirs and the overwhelming power of the York dynasty, she names him Henry, like the king; sends him into exile; and pledges him in marriage to her enemy Elizabeth of York’s daughter. As the political tides constantly move and shift, Margaret charts her own way through another loveless marriage, treacherous alliances, and secret plots. She feigns loyalty to the usurper Richard III and even carries his wife’s train at her coronation.

Widowed a second time, Margaret marries the ruthless, deceitful Thomas, Lord Stanley, and her fate stands on the knife edge of his will. Gambling her life that he will support her, she then masterminds one of the greatest rebellions of the time—all the while knowing that her son has grown to manhood, recruited an army, and now waits for his opportunity to win the greatest prize.

In a novel of conspiracy, passion, and coldhearted ambition, number one bestselling author Philippa Gregory has brought to life the story of a proud and determined woman who believes that she alone is destined, by her piety and lineage, to shape the course of history.


Here are the rules: This giveaway is only available to American and Canadian readers. The giveaway is open from today until 12 p.m. on Monday August 9th. The winner will be announced on Tuesday, August 10th.


1) Just leave your name and email address in the comments if you wish to enter the giveaway
2) If you are not a follower and become one, you get an extra entry

3) If you tweet about it, you get an extra entry

Linda said…
I've never been much of an admirer of Margaret Beaufort, perhaps I need to read a book sympathetic to this woman.
I already follow your blog.
lcbrower40(at)gmail(dot)com
August 3, 2010 at 10:50 AM

Dani said…
This is awesome giveaway please enter my in the drawing.
Dani
Navywife89@yahoo.com
and I am already a Follower
August 3, 2010 at 11:11 AM

She sounds like a fascinating person! A thirst for power so strong she was willing to marry three times! WOW
August 3, 2010 at 11:51 AM

brokenteepee said…
I would love to win this. Thank you
I'm already a follower.
thank you
kaiminani at gmail dot com
August 3, 2010 at 12:49 PM

Amber at The Musings of ALMYBNENR said…
thanks for the giveaway!

Terry said…
Thanks for sponsoring this great giveaway. I would love to read this one. I am a follower.

hmmlife said…
oh i would love to win this.. just finished reading the "white queen"..waiting to get my hands on this one.
my emai: Mkahlon04@Yahoo.com
I am a follower and will tweet via Koelk on twitter:)
August 3, 2010 at 3:23 PM

Unknown said…
Please enter me. I'd *love* to win this.

Courtney said…
Google Reader just suggested you! I've started following. Thanks for the chance to win!

Rachel said…
Thank you for the giveaway!

Lynn Irwin Stewart said…
I'd love to win this book! Thanks for the opportunity! I'm already a follower.

Stacy said…
I would like to win this. Will become a follower now as well.

Amy said…
Oohhh please enter me in this awesome giveaway! Thanks!

ikkinlala said…
I would love to enter, please!

Nelsonjane said…
O Happy Day! I want to read more about our family. Margaret Beaufort is the great-grandmother of my husband's 15 great uncle!

We come down thru her son Henry VII's daughter Margaret Tudor and the child by Tudor's 2nd. husband Archibald Douglas the 6th Earl of Angus.

fishernelson@frontier.com and I am a newly subscribed follower.
August 6, 2010 at 10:23 AM

Dawn said…
I tweeted about this too!

Bearded Lady said…
can't wait to read this one. Thanks for the sneak peak. I thought Gregory was really back on track with The White Queen
August 16, 2010 at 1:00 PM

Meg said…
I'm dying to read this book! Philippa Gregory has been one of my favorites for a long time. I'm a new follower!
Meghan mavenxox@aol.com
August 17, 2010 at 7:34 PM