Scandalous Women in the News 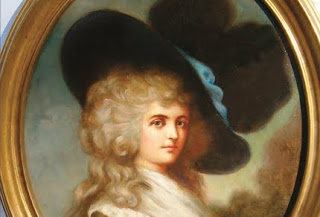 Happy Birthday to Georgiana, Duchess of Devonshire.  Recently a copy of the Gainsborough portrait was found and restored by two Syracuse University alumnae (my alma mater). Joyce Dallaportas and Ronald K. Theel found the painting at a Syracuse estate sale and confirmed that it was the lovely Duchess. You can read the article from Syracuse University magazine here
Speaking of Duchesses, Sarah Ferguson The Duchess of York has been in the news lately since it was revealed that she involved in a cash-for-access scandal uncovered by the tabloid newspaper The NEWS OF THE WORLD.  The whole thing was a set-up on the part of the newspaper. The Duchess got caught on videotape offered to help a gentleman that she thought was a businessman gain access to her ex-husband Prince Andrew for the tidy sum of 500,000 pounds. Last week, she went on Oprah to explain her actions, saying that she has gotten into financial trouble again, and had hit rock bottom. You can read about it here in HELLO Magazine. Poor Fergie! She wouldn't admit to Oprah exactly how much she owed but did admit that she's been living beyond her means trying to keep up appearances. There has been much talk about why the Queen doesn't bail her out, but Ferguson is no longer a member of the Royal Family and her daughters are grown, so the Queen has no obligation to her.
Author Faith L. Justice recently guest blogged about Hypatia, and now a new film about her is in limited release called Agora directed by Alejandro Amendabar. Slate magazine recently reviewed the film.
Georgiana Hypatia The Duchess of Devonshire

dave hambidge said…
Fergie was setup, but clearly was well used to conning those willing to offer bungs...
June 8, 2010 at 3:27 AM

NAVAL LANGA said…
I just read some of your posts here. I liked your narrative technique. I write short stories and articles about painting and yoga on my blog-sites. I am on Facebook as 'Naval Langa'.
June 8, 2010 at 9:20 AM

Elizabeth Kerri Mahon said…
What got me was her claiming that she was initially asking for money for a 'friend' and then just decided to ask for almost $750,000 for herself. It was clear from watching the videotape that she was drunk but I also got the feeling that this wasn't the first time that she had done this.
June 8, 2010 at 11:47 AM

Charlene said…
I wonder how many times in Royal history some actual royal or their spouse or prodigy used their access to make money?

Heart of the Wood said…
Fergie is already on a strict allowance from the Queen, who must be profoundly sick of her embarassing the family. The allowance is rather more than I've earned in any three of the last 15 years!
June 10, 2010 at 7:03 AM

Elizabeth Kerri Mahon said…
Oprah asked her if it was true that she only accepted $20,000 a year alimony, which I'm pretty sure was not the sum, but I'm sure it wasn't much more than $50,000. The Queen keeps her cereal in tupperware and eats off a tray when there isn't a state dinner. She also goes around the palace turning off the lights so I'm sure she expected Fergie to economize.
June 10, 2010 at 11:35 AM

Anonymous said…
Gifts to goa, Flowers to goa, Cakes to goa,Same Day delivery all over goa
http://www.goaonlinegifts.com
June 14, 2010 at 11:37 AM

Leah Marie Brown said…
Fergie's behavior is disappointing. I thought she had cleaned up her act after the toe-sucking scandal. She was writing, being a spokes woman, and raising her kids. Too bad, really.
June 18, 2010 at 9:12 AM

Elizabeth Kerri Mahon said…
Fergie reminds me of lottery winners, who spend all the money, and then wonder where it went. I understand that she felt that she had a position to maintain as a Duchess, but she seriously needs to learn to budget. Going bankrupt at 30 is one, at 50 it's just plain embarassing.
June 18, 2010 at 11:57 AM

Unknown said…
I don't want to believe that it was FERGIE!

Christmas Vacation is near so it's more fun to spend a lot of time with your family or friends at a comfortable price at a comfortable place..
For Rentals and Sales of Condominiums and Real Estate with good ambiance, location and furnish materials..