Scandalous Women in Fiction: The Confessions of Catherine de Medici 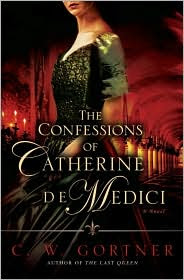 The Confessions of Catherine de Medici
by C.W. Gortner
Ballantine Books, May 2010

To some she was the ruthless queen who led France into an era of savage violence. To others she was the passionate savior of the French monarchy. The last legitimate descendant of the illustrious Medici line, Catherine suffers the expulsion of her family from her native Florence and narrowly escapes death at the hands of an enraged mob. While still a teenager, she is betrothed to Henri, son of François I of France, and sent from Italy to an unfamiliar realm where she is overshadowed and humiliated by her husband’s lifelong mistress. Ever resilient, Catherine strives to create a role for herself through her patronage of the famous clairvoyant Nostradamus and her own innate gift as a seer. But in her fortieth year, Catherine is widowed, left alone with six young children as regent of a kingdom torn apart by religious discord and the ambitions of a treacherous nobility.

I confess that I was never a huge fan of Catherine de Medici. I always fell into the Diane de Poitiers camp. The story of how Henry II fell deeply in love with her as a boy which ruined him for all othe women including his wife, well I thought that was terribly romantic. To me, Catherine was a jealous shrew who tried to get between two lovers. How wrong I was!

My change of opinion comes after reading C.W. Gortner's masterful new novel, CONFESSIONS OF CATHERINE DE MEDICI. He takes the story of this vilified Queen and makes it fresh. We meet Catherine as an orphaned 11 year old living with her aunt in Florence, a pawn on the chessboard of European politics, subject to the rise and fall of her uncle Pope Clement VIII. When Charles V invades Italy, the powers that be sent Catherine to a convent where she is treated miserably, hair sorn, forced to pray all day, starved of food. When her fortunes change, she is sent to Rome and married off to the Duc d'Orleans, the second son of Francois I.

Here's where the novel really takes off, and gets juicy. Neglected by her husband, Catherine is taken under the wing of Francois' mistress, the Duchess d'Etampes.  The doings of teh court are described in vivid detail, giving the reader a front row at the greatest show on Earth. Catherine learns to navigate the court, who is an ally, who is to be avoided at all costs, and who her enemies are.  Enduring the snigers and gossip of those who would be only to happy to see the foreigner fail. Catherine navigates the obstacles placed before her with cunning and strength. She also suffers from visions which frighten her, a gift that she doesn't want. During the course of the novel, she seeks out the help of Nostradamus to help her and relies on the help of a young astrologer who has escaped from Florence which has unforseen consequences.

Under Gortner's pen, Catherine becomes a three dimensional character, sympathetic, neither black nor white, with shades of grey. In many ways, her story is the journey of a woman beginnng to fully realize her own power, and not just within the realm of the court, but discovering her inner strength and disguising her weaknesses. Catherine is treated as a foreigner who is not good enough to be the future Queen of France when she arrives at court, facing the possibility of being banished if she doesn't give birth to an heir. She becomes a widow and a single mother fighting for her children's right to the throne. A mother who outlives most of her children.

Henri II remains a cipher in the novel, a shadowy figure dominated by the sun and the moon as it were, in the persons of Catherine and Diane de Poitiers. I'd almost feel sorry for him if he weren't such an ass at times. If there is a villainess in the book it is Diane de Poitiers. Gortner depicts her as a cold, controlling, reptilian creature who has no real love for Henri.  The politics of the time which can be a convoluted minefield is particularly well explained in this book. At all times, the reader is aware of who the major players are.  The Guise family, who I've always been intrigued by, and their war against the French Protestants is gripping. All the secondary characters come to life in this book, Gaspard de Coligny who I had actually never heard of, Margot, the young rebellious princess, and all of Catherine's sons leap off the page. I felt immediately immersed in this world, gripped from the very first page.

I'd been in a bit of a reading slump lately but Gortner's book jolted me right out of it. I stayed up all night reading the book, wanting to know what happened next, how Catherine would deal with the next crisis, cringing when one of her children did something stupid and she would have to fix it.  This is the second book of Gortner's that I've read, and I'm in awe of writers like him, Sharon Kay Penman, Catherine Delors, and others who make history come to life so vividly in their books.

I give high marks to this book, and I can't wait to read what Gortner comes up with next.
Catherine de Medici

Leah Marie Brown said…
Ooo, this one sounds great. And I love the cover!!

A few years ago, while visiting France with a writer friend, I took a wrong turn and literally ended up at the road leading to Chateau Chaumont. We parked, hiked up the hill and toured the chateau. A guide told us that Catherine de Medici held seances with her astrologer, Ruggieri, at Chaumont. Very chilling but cool.
June 29, 2010 at 9:33 PM

Elizabeth Kerri Mahon said…
Leah, there are a lot of cool scenes with Ruggieri at Chaumont in the book. How fascinating that you've actually been there!
July 1, 2010 at 11:59 AM