Scandalous Women in Fiction: The Boleyn Wife by Brandy Purdy 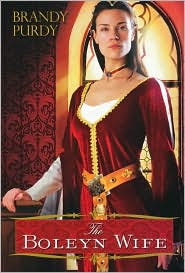 Shy, plain Lady Jane Parker feels out of place in Henry VIII's courtly world of glamour and intrigue—until she meets the handsome George Boleyn. Overjoyed when their fathers arrange a match, her dreams of a loving union are waylaid when she meets George's sister, Anne. For George is completely devoted to his sister, and cold and indifferent to his bride. As Anne acquires a wide circle of admirers, including King Henry, Jane's resentment grows. But if becoming Henry's queen makes Anne the most powerful woman in England, it also makes her highly vulnerable. And as Henry, desperate for a male heir, begins to tire of his mercurial wife, the stage is set for the ultimate betrayal. Encompassing the reigns of four of Henry's wives, from the doomed Anne to the reckless Katherine Howard, The Boleyn Wife is an unforgettable story of ambition, lust, and jealousy, of the power of love to change the course of history, and of the terrible price of revenge.

The book is filled with wonderful details about life at the Tudor Court, and vivid descriptions of Henry VIII, Catherine of Aragon, Wolsey and Anne Boleyn. Purdy does a masterful job of conveying Jane's journey from a woman madly in love with her husband to a woman consumed with hatred and jealousy for her sister-in-law because of her husband's devotion. The reader can't help but understand Jane's position, but Jane loses empathy by her actions. She spends a great deal of time spying on her husband George, and Anne. While some of the moments where Jane either overhears things or spies on Anne are credible, there are moments where it is not. For example, there is one scene where Jane hides in a wardrobe to spy on Anne and Henry after they are married. Jane ends up coming across as paranoid as well as a jealous shrew. At times, I found her hatred for Anne to be wearisome. I wanted her to grow some balls and just get on with it, accept that her husband was never going to love her.

Purdy adds an interesting subplot to the novel which I won't reveal here. While some readers may quibble with her decision, for me, it actually made sense and made Jane a much stronger character. One can understand why she makes the decision that she does, even if it gives the reader pause. The court room scenes where Anne, George, and the four men accused of committing adultery with the Queen, are exceptionally well done. I only wish that the court room scenes in Anne of the Thousand Days had been as well done.

Because Anne Boleyn so dominates the first 2/3's of the book, the last third of the book detailing Katherine Howard's short reign seems truncated. I also had a hard time believing that Jane was so reluctant to help Katherine. The final scenes in the book where Jane starts to lose it, and begins to see the ghosts of George and Anne in the Tower of London are where I finally started to feel a sense of empathy for Jane. It was sort of the chickens coming home to roost situation, where Jane begins to come to terms with what she'd done by confessing all that she had heard and seen to Cromwell, helping to send her husband to his death. Still even at the end with death awaiting her, Jane still blames Anne for George not loving her.

Despite the flaws in Jane's character, and my wanting to slap her upside the head, I found it hard to put the book down. Jane is at a distinct advantage in this book though because Anne will win out everytime, she's just that fascinating a character. Purdy gives it a good try and I enjoyed The Boleyn Wife much more than I did Julia Fox's biography. If you want another look at the story of Anne Boleyn, then pick up a copy of The Boleyn Wife.
The Boleyn Wife

Amy said…
I just finished reading this last night, and I loved it as well. I agree with your assessment of Jane - her obsession with Anne was a bit over-the-top, but I bought it all. Thanks for your insights!
May 17, 2010 at 4:16 PM

Anonymous said…
Am glad to see another review. This book is on my to read list, but I haven't been able to get to it yet. It is always good to s\read reviews. Each one brings out a different part of the book.
May 18, 2010 at 7:55 PM

Elizabeth Kerri Mahon said…
I'm intrigued by Brandy Purdy's writing enough to want to read her next book. Although I enjoyed aspects of the book, I just don't like Jane Parker, but I did like her take on Anne Boleyn.
May 22, 2010 at 10:36 AM