All About Anne: Highlights of the 1st Anne Boleyn Experience 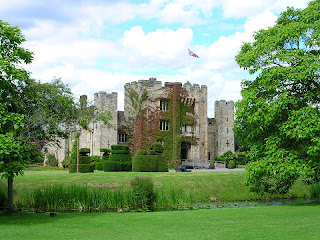 Last week, I had the joy of spending a week at Hever Castle for the first ever Anne Boleyn Experience. This amazing trip was put together by Claire Ridgway who has the most wonderful web-site called The Anne Boleyn Files. If you don't already know about the site, please do check it out. It's one of the best historical web-sites out there.  Over my years of traveling in England, I'd been to Hever Castle before, but staying there is an entirely different experience. I felt so close to Anne Boleyn, looking out my window in the morning, I could imagine her wandering the gardens, perhaps with her brother George, or with the King himself. When the final day came, I didn't want to leave. I'm sure there are scratch marks in the castle walls from where I clung for dear life.

Now that I've had a few days back in reality (I flew back to the States on Friday and spent the weekend in a jet-lagged coma watching the first series of Law and Order UK), I've had time to reflect on my time at Hever. Here are just a few highlights and photos from the trip. I'll have more when my pictures get developed. 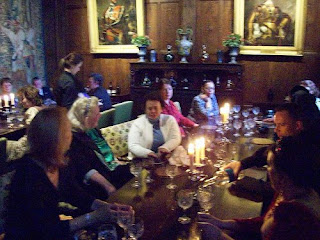 This was taken at dinner in the Tudor Dining Hall, I'm seated at the end of the table looking pensive
Lowlights:
There weren't really any other than the tour was too short and my shower didn't work for two days. 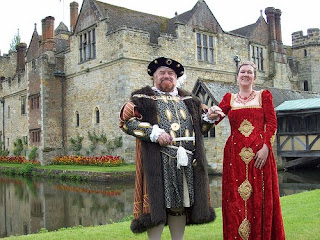 Claire and Henry VIII
The trip was truly one of those trips that I will remember for the rest of my life.  I can't wait for next year!
Please check out The Anne Boleyn Files for Claire's daily journal and more photos from the trip.
Anne Boleyn Hampton Court Henry VIII Hever Castle The Anne Boleyn Experience

May said…
This really sounded like a fabulous trip- even from far away, following what was happening on Claire's site was alot of fun.
May 26, 2010 at 1:44 PM

Amber at The Musings of ALMYBNENR said…
Thanks so much for sharing your own experience. I am hoping to attend next year!
May 26, 2010 at 2:05 PM

Gwendolen Elaine said…
Oh my gosh! What fun!I LOVE reading about that time period, even though I have a teensy-weensy bit of trouble memorizing who was married to whom,etc...Sounds like a dream trip!
May 26, 2010 at 7:36 PM

Anonymous said…
I'm so glad that you enjoyed the tour, Elizabeth, it was great to finally meet you. Your vegetarian meals looked so tasty!
Sorry about the shower, I will put in a complaint about that.
I am so missing Hever, it was such an anticlimax to wake up the next day and not go for a walk in the gardens before breakkfast or to look at the castle - sob! I'm hoping to go on a day trip there in July with my kids so I'll say hello to it then from you xx
May 27, 2010 at 12:36 PM

Bearded Lady said…
Thanks for the recap. I have never been to Hever. Last time I was in London, I begged to go to Hever but it is a bit of a drive and so little time...

I so want to go on this tour. I hope they have it again next year.

I remember last time that I went to the Tower the Yeoman talking about the mysterious roses that get delivered and I thought they were making it up. So there really is an unknown rose donor? So interesting.
May 27, 2010 at 9:38 PM

Elizabeth Kerri Mahon said…
Hi Bearded Lady. Yes, there really is an unknown rose donor. I will try and post a photo of them on the blog. They are beautiful and clearly expensive. Next year, there will be two tours, one in May and one in July. The details will be announced on The Anne Boleyn Files next Wednesday.

Claire, I have been in such a funk this week since I'm no longer at Hever. No swans on the front lawn, no beautiful roses to smell. It's such a magical place, I have to believe that the times that Anne spent there were happy times, even with Henry.
May 29, 2010 at 1:38 PM

Sarah Johnson said…
This sounds like such an amazing tour, getting to stay on site and soak in all of the atmosphere. Thanks for posting about it!
May 29, 2010 at 2:27 PM