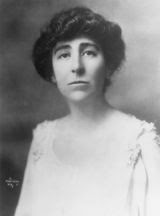 Scandalous Women is pleased to once again have guest blogger Talia Weisberg to give us the 411 on Jeanette Rankin.
There have been women in governmental positions since ancient times. Hatshepsut, Cleopatra, Jezebel, Salome Alexandra, Eleanor of Aquitaine, Isabella I, Catherine de Medici, Elizabeth I, Catherine the Great, and Victoria are just a few examples. America has also had its share of women in government; Hillary Clinton and Nancy Pelosi are two of thousands currently in office. Ninety-six of those women are in Congress. The road to getting them there has been a long one, begun by Jeanette Rankin in 1917. Jeanette Rankin, the first woman elected to Congress, opened the door for women to enter politics in the United States and worldwide.
Jeanette Rankin (sometimes spelled Jeannette) was born on a ranch near Missoula, Montana on June 11, 1880. She helped her parents run the ranch and raise her five younger siblings, which gave her the confidence that she could take charge and lead, a mindset she continued to go by in her later years. After graduating from the University of Montana with a BA in biology, she became a teacher. Deciding that teaching wasn’t her calling in life, she attended the New York School of Philanthropy to become a social worker. After she practiced social work for a while, she decided this too was not her calling and enrolled in the University of Washington.

While there, she learned about the suffrage movement and began getting involved in First-Wave Feminism. She joined the National American Woman Suffrage Association (NAWSA) and helped the campaign for Washington women to get the vote. After the successful campaign ended in 1910, she went back to Montana and rallied Montanan women to fight for their rights. They won enfranchisement in 1914.
Rankin’s work in the suffrage movement, especially in Montana, set the stage for when she decided to run for the House of Representatives in 1916. Despite fears from leading feminists that a loss would be a blow to the movement at large, she ran as a Republican on a platform that was pro-suffrage, pro-social welfare, and anti-war, as she was also a hardcore pacifist. (“Killing more people won’t help matters,” she said after Pearl Harbor was bombed.) Her family supported her congressional bid, as her politically savvy brother Wellington was her campaign manager and her sisters helped her campaign. Fellow suffragists also gave her their backing. On November 10, 1916, the votes came in. Papers originally reported that she had lost, but they were wrong: Jeanette Rankin was rightfully elected as the first woman in Congress.

After Germany declared unrestricted submarine warfare on all Atlantic shipping on April 2, 1917, President Woodrow Wilson called a congressional session to decide whether or not America should enter World War I. This was one of the most important decisions in Rankin’s life. Friends, family, and suffragists told her to vote for the war to keep hopes of reelection alive, save her battles for times when she could win, and keep the women’s movement from suffering from a worse reputation. Rankin knew she had to listen to heart, though. When it was time for her to vote, she broke 140 years of congressional tradition when she commented as she voted: “I want to stand by my country but I cannot vote for war. I vote no.” She was joined by the minority of congress members, 374 for and 50 against.

Her decision was greatly criticized by her home state and suffrage movement. A Montanan paper described her as “a dagger in the hands of the German propagandists, a dupe of the Kaiser, a member of the Hun army in the United States, and a crying schoolgirl,” and NAWSA stated that “Miss Rankin was not voting for the suffragists of the nation - she represents Montana.” Despite the suffrage movement’s desire to distance themselves from her, she remained an ardent feminist during her congressional term. She created and was appointed to a congressional committee, the Committee on Woman Suffrage. She also managed to pass a resolution in the House on a constitutional amendment allowing women the right to vote, but it was defeated in the Senate.

After her term was over, Rankin ran for the Senate. Despite her pro-war measures votes and new pro-war planks in her platform, she lost the election by 2,000 votes. She spent the time after her first sojourn into Congress on a farm near Athens, Georgia, where she founded the Georgia Peace Society, became the speaker for the National Council for the Prevention of War, and served as the field secretary for the National Consumers’ League.

In 1939, Rankin saw Adolf Hitler rise to power in Germany and knew that America would want to enter the war ripping apart Europe. Her inner pacifist knew that she could not let this happen, so she ran for the House of Representatives again, once more as a Republican from Montana. Her platform was similar to her original one, minus the pro-suffrage plank; women across the country became enfranchised in 1920, when the Nineteenth Amendment was passed. “No one will pay any attention to me this time. There is nothing unusual about a woman being elected,” she said at her second election. It was true; dozens of women had been elected to Congress between her first and second terms, and there were ten other women in Congress at the time.

While in Congress, as she expected, she had to vote as to whether or not America should enter World War II. She was the only person to vote on both the first and second World Wars. She voted no again, once more giving a commentary as she gave her vote: “As a woman, I can’t go to war, and I refuse to send anyone else.” She stood alone, as she was the only person who voted against the war this time. Her previously middling popularity plummeted, with newspapers all across the country rebuking her harshly and individuals sending her hate mail. She had to leave the session escorted by police to protect her from furious bystanders.

Rankin stayed out of the spotlight, continuing her work in pacifist and social fields, until 1968, when she organized a march 5,000 strong on the Capitol to protest the Vietnam War. It became known as the Jeanette Rankin Brigade, culminating in the presentation of a peace petition to House Speaker John McCormack of Massachusetts.

Jeanette Rankin died on May 18, 1973, just before she turned 93, when she was considering running for a third term to protest the Vietnam War. Despite the serious events that occurred during her lifetime, she always retained a sense of humor: “If I had my life to live over, I would do it all again, but this time, I would be nastier.” Without Rankin’s achievements, women would have never been able to shrug off the shackles of typical feminine roles and go on to fight for the right to high-powered careers in business, law, and government. Jeanette Rankin paved the way for women to aspire to rise from the duties of the kitchen to the highest level obligations of the White House.
Jeanette Rankin