Nelly, who began her career as an actress before discovering the more lucrative profession of courtesan, was considered a rival of Kitty’s, but she moved in very high circles indeed as a mistress of the profligate peer George Richard St John, 2nd Viscount Bolingbroke. “Bully” Bolingbroke was in an unhappy marriage with Lady Diana Spencer (the first Lady Diana Spencer) and had had a long string of chere amies. It is safe to say that Nelly O’Brien’s relationship with him was not – on his part – exclusive. The Bolingbroke marriage was dissolved in 1768 after he charged his wife with adultery (“criminal conversation”) with Topham Beauclerk, whom she later married. The divorce was a major scandal of the time. 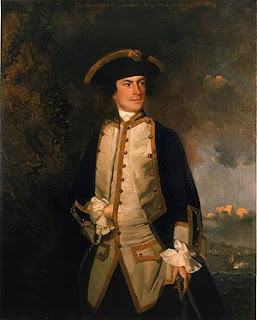 This 1749 Portrait of Augustus Keppel was one of 6 of him painted by Reynolds.
It was Reynolds’ longtime friend Augustus Keppel (later Admiral Keppel and lst Viscount Keppel, he was a distinguished naval hero with royal blood in his veins) who first brought Nelly O’Brien to the artist’s Great Newport Street studio around 1762. (This was Reynolds’ second studio; the first had been on St. Martin’s Lane; the last was to be on Leicester Square.) Had Nelly been dallying with Keppel prior to Bolingbroke? It’s possible, but Bolingbroke paid for the first portrait.

That inveterate gossip and chronicler of his times Horace Walpole confirmed the Bolingbroke-O’Brien relationship in a 1763 letter to his friend George Montagu. Nelly was to give birth to Bolingbroke’s son in 1764. 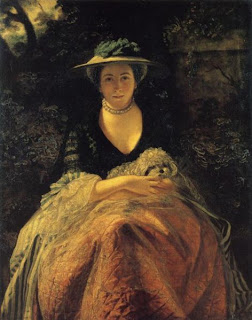 This portrait of Nelly O'Brien circa 1762-4 (now in the Wallace Collection, London) is one of Reynold's best-known works
The portrait commissioned by Bolingbroke shows Nelly O’Brien holding a little dog (a well-recognized symbol of fidelity) in her lap. A Victorian critic named Miss Gerard described the portrait thusly:

“Perhaps the most beautiful of Nelly is the one in the Hertford Collection, which was painted in 1763 and was exhibited at the Manchester Exhibition in 1857. It represents her in full sunlight, in an attitude of lazy enjoyment, sitting with her hands crossed, a pet spaniel on her knee. Her voluptuous face, raised as if at the approach of one she has been waiting for, is lit up under the shade of the flat Woffington hat by the reflected lights from her dress, a quilted rose-colored slip with lace over it, a black lace apron and mantilla, and a sacque of striped blue silk.”

A contemporary art critic, Jonathan Jones, writing in the Guardian, noted “the painting is deeply admiring of its subject. Reynolds’s attitude …is embodied in the frolicking, foaming brushwork of the little white lapdog nuzzling in her lap. He would like to be that dog.” (I agree whole-heartedly with Jones’ assessment of the dog and Reynolds.)

It is also interesting to note here that the Victorian critic brought up the Fisher-O’Brien portraits and their rivalry, commenting that although Kitty might have been “less handsome” than Nelly O’Brien, she was “more dangerously fascinating” a woman. They were indeed very much alike, and both had been extremely favored by Reynolds. Sadly and ironically, they were both to die young, within a scarce year of each other, leaving a hole in the artist’s affections that was to be filled in due time by another actress, albeit a successful one, Fanny Abington.

At the time Reynolds was painting Nelly, he was also – in an interesting bit of timing! -- painting Bolingbroke’s wife Lady Diana. There had to be creative scheduling at work to keep these two women and their hangers-on (sittings were notoriously social events, with friends and others dropping in) from running into each other! 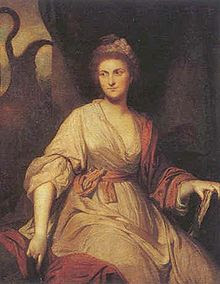 Check out the eyes! Reynolds portrait of Viscountess Bolingbroke
An on-dit making the rounds at that time was that Reynolds had been given a peculiar instruction by the commissioner of both portraits. As chronicled by Horace Walpole and cited in Carola Hicks’ biography of Lady Diana, Improper Pursuits:

Walpole later pronounced the painting to be “a very pretty picture” when exhibited by the Society of Artists. (The S of A was one of several artists’ societies that were forerunners of the Royal Academy.) As for Lady Diana, she became an artist in her own right, and her work was also praised by Walpole.

My own favorite portrait of Nelly O’Brien, however, is the ¾ length painted circa 1763-7. She is gorgeous, wearing a low-cut ivory dress that exposes a good deal of her fine white neck and bosom. She is again shown sitting in a garden, next to a carved relief of Danae, a princess of classical legend to whom the god Jove made love in the form of a shower of gold. This lush, glittering waterfall openly symbolizes Nelly’s role as a successful courtesan. (An odd touch is the ornate ring displayed openly on the third finger of her left hand, where a wedding ring would be.) 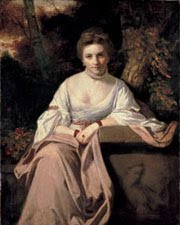 Nelly O’Brien, circa 1763-7, a stunning study of a relaxed woman confident in her own beauty
Nelly was rumored to have had two sons with Sackville Tufton, 8th Earl of the Isle of Thanet, but whether this was before, after, or during her affair with Bolingbroke cannot be verified. She died in London in 1768, a year after her one-time rival Kitty Fisher. Her protectors Thanet and Bolingbroke also died a year apart, but twenty years afterward, in 1786 and 1787 respectively.

Was she sexually involved with Sir Joshua Reynolds, as Kitty Fisher was rumored to be? Although Reynolds entertained her frequently, as he did Kitty, there is no hard evidence. It seems doubtful, though, that he would have poached on Bully Bolingbroke’s turf, tempting as Nelly O’Brien might have been.

Isabella Bradford/Susan Holloway Scott said…
Lovely post, and always a good excuse to look at those lovely portraits as well. I agree that for whatever reason, Reynolds' pictures of the "bad girls" are much more interesting and flattering than those of many of the noble ladies. Thank you!
April 20, 2010 at 10:24 AM

Elizabeth Kerri Mahon said…
Isn't it fascinating? I've learned about women that I've never heard of. Can't wait to post the final installment.
April 20, 2010 at 11:30 AM