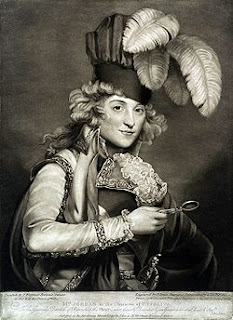 Scandalous Women is pleased to welcome Nancy Woodruff, author of the new book which came out yesterday, HIS WIFE'S AFFAIR.

I first discovered Dora Jordan via a portrait hanging at Apsley House in London. The Apsley House tour guide told such a fascinating story of Dora Jordan’s life that I couldn’t believe I had never heard of this woman before. Since a biography had already been written—brilliantly, by Claire Tomalin—I knew I had to find a way to fit Dora Jordan into my fiction and I hit upon the idea of having my modern heroine, an actress, portray her in a one-woman show. Of course I then had to actually write the one-woman show, and find a way to fit it into my novel, My Wife’s Affair.

Dora Jordan came from a family of actors, and she left her native Ireland to work in England at around age twenty. At the time, she was pregnant with her first child, the product of a seduction or quite possibly a rape, and she wandered around the north of England with a theatre company. After her daughter Fanny was born, Dora moved to London, where she was an instant hit. She lived for a number of years with Richard Ford, an aspiring politician, and they had two daughters together, but when Richard refused to marry her she decided to accept the advances of another suitor, William, the Duke of Clarence. William was one of George III’s sons and the future King William IV of England (Queen Victoria’s uncle).

Dora’s romance with the Duke was quite scandalous at first and she had to endure obnoxious attacks from the press and political cartoonists of the day. It was really unfortunate that her last name, Jordan, was also a nickname for a toilet in those days. Eventually, Dora and the Duke slipped into a domestic life in a large house outside London. They lived together for nearly twenty years and had ten children together, and all the while, she almost never stopped working. She was a wildly successful stage actress, much beloved, the most famous comic actress of her time. Among her most famous roles were Rosalind from As You Like It and Viola from Twelfth Night. With her star power, her high-profile romance, and her large family, she was a kind of Angelina Jolie of her day. Although her role as royal mistress suggests scandal, it seems to me that Dora really wanted a very normal life. She loved the Duke, she loved her children, and she loved her work. She really wanted to have all those things and be left alone—but she was often hounded by the press and public.

Heartbreakingly, there’s a sad end to Dora’s story. The Duke eventually dumped her for a younger, richer, more socially acceptable woman, and though her children weren’t specifically taken from her, she needed them to live under their father’s protection because he was royalty and she, as an actress, had virtually no social status. “Giving the children up would have been death to me,” she wrote, “if I were not so strongly impressed with the certainty of it being for their future advantage.” She was also swindled out of a lot of money by her son-in-law and she had to flee to France to evade her creditors. She became ill, and died less than a year later, without having seen the Duke since the day he dumped her.

Thanks Nancy! Interesting Factoid: David Cameron, the current leader of the Conservative Party, and possible Prime Minister is descended from Dorothy and William.

If you want to learn more about Dorothy, I highly recommend Claire Tomalin's biography MRS. JORDAN'S PROFESSION.  Come back next week when I'll be giving away a copy of Nancy's new book, HIS WIFE'S AFFAIR.
Dorothy Jordan

Gamma said…
It's is more like the MAN who was scandalous. Imagine dumping the mother of your children and your lover for twenty years1
October 23, 2015 at 2:16 PM