Scandalous Book Review: The Creation of Eve by Lynn Cullen 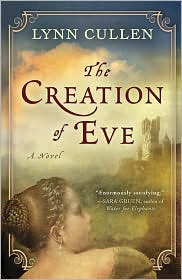 From the back cover: The Creation of Eve is a novel based on the true but little known story of Sofonisba Anguissola, the first renowned female artist of the Renaissance. After a scandal in Michaelangelo's workshop, Sofi flees Italy and joins the Spanish court of King Felipe II to be a lady-in-waiting to his young bride. There she becomes embroiled in a love triangle involving the Queen, the King and the King's illegitimate half brother Don Juan.  The Creation of Eve combines art, romance, and history from the Golden Age in Spain in a story that asks the question: Can you ever truly know another person's heart?

My thoughts: When I first heard about this book from Trish and Lydia at Penguin, I couldn't wait to read it and review it. It sounded like a book that was after my own heart. Set in Spain in the years 1560-1568, Lynn Cullen provides a view of the Spanish Court through the eyes of Sofi, who is in a unique position, one that she never sought for herself. The back cover says "A lush and compelling tale of intrigue and longing" and the book has that in spades. Sofi longs for Tiberio Calcagni, a fellow painter who she met at Michaelangelo's workshop, Elisabeth of Valois longs for Don Juan, the King's half-brother, and Felipe's son Don Carlos longs for Elisabeth.

Anyone who has read Schiller's play or seen Verdi's opera knows of Don Carlo's unrequited love for Elisabeth. Cullen has added the extra dollop of spice by imaging that it is actually Don Juan who Elisabeth longs for, which makes a great deal of sense when you think about it. Don Juan, as described by Cullen, is a younger, gentler, version of the King who has not been worn down by years of ruling a kingdom that now stretches from Holland, parts of Italy through the New World.

Cullen does an amazing job at reacreating the Spanish Court, particularly the infighting between Elisabeth's French ladies and her Spanish ones. Reading the book, the reader can feel the heat of the Spanish sun bearing down relentlessly and the damp and dankness of the Royal Palace.  I felt reading the book that I was getting a rare glimpse into a world that hasn't often been seen in historical fiction. Sofi is the perfect choice to narrate this novel.  As both Elisabeth's lady-in-waiting and her painting instructore, she is in a unique position to tell the story. Because she is a painter, Sofi has a keen eye for detail. The relationship between the two women is wonderfully depicted, as Elisabeth grows from a giddy teenager, into a more mature Queen. Sofi, despite herself, finds herself caring for deeply for the Queen which leads her to make a brash decision. She is also torn between her life in Spain and the one she left behind.

The revelation for me in this book was the portrait of Felipe II of Spain, who is generally seen as Mary Tudor's husband, who had no use for her and treated her cruelly. In Cullen's depiction, he comes across as a man who can be both tender and cruel, both to his wife and to his son. King of Spain since the age of 18, he's spent most of his life trying to hold on to what Spain already possesses as well as expanding their territories in the new world. One feels sympathy for Felipe, who has married a young girl 18 years his junior, he loves her yet he still treats her like a little girl, giving her treats.

As a history geek, I was like a giddy school girl reading the scenes where Elisabeth goes to meet her mother, the formidable and scary Catherine de Medici. And the looming knowledge that the Inquisition has eyes everywhere is brought home with the story of Michaelangelo. Cullen hews closely to the facts of her story. While the romantic in me would have loved to have seen a love story between Sofi and the Dutch doctor Debruyne, that was not part of Sofi's story.  There was so much meaty stuff in this book, I could write about it all day. The language is just delicious, and the minor characters are skillfully and vividly drawn.

I cannot highly recommend this book enough. Just to give you an idea of how much I liked this book, even though I haven't slept in almost two months, trying to get my book in on time to my editor, I willingly stayed up all night finishing The Creation of Eve because I couldn't put it down.

For more information about the book and the author:  http://www.lynncullen.com/
Creation of Eve

Daphne said…
I"ve been wondering about this book - it sounds like one to definately put on my list! Thanks for the review.
March 3, 2010 at 12:01 PM

trish said…
You make this book sound like such a fun read! "The language is just delicious, and the minor characters are skillfully and vividly drawn." When a particular historical fiction book gets praise from a history geek, I think that's quite telling!

Lynn Cullen said…
What a treat to have my book described in such a compelling way! You are a master with words. I need to find your books. Good luck with getting your manuscript in!

Elizabeth Kerri Mahon said…
Thanks Trish, for giving me the opportunity to read Lynn's book.