I recently asked Lynne:  After you discovered Sofi, what was the hardest aspect of her to bring to life and write about? And how limited were the resources regarding Sofi?


Good questions! There is very little printed information about Sofonisba Anguissola. She has an entry in Giorgio Vasari’s THE LIVES OF THE ARTISTS dating from the 1500’s, and there are two good art books about her from the 20th century, but even those are out of print. I got my hands on those books and started reading about her life. Yet it was not words but Sofi’s own paintings that brought her to life for me.

I read that her father encouraged her career and promoted her within the noble families in Cremona, and then when she caught on locally, he paved her way to paint in several ducal courts across Italy by writing letters and sending samples with the recommendations by Cremonese dignitaries. Only a few formal letters by Sofonisba’s father (none by Sofonisba, that I can recall) and a handful of legal records have survived. A researcher can tell nothing of their personalities from them. I had decided that maybe Amilcare Anguissola was the ultimate stage dad, and like Mozart’s father, promoted his child prodigy in order to win fame and fortune for himself. I wrote a whole draft with Amilcare as an evil show dad, but as fun as that was, it just didn’t ring true. I scrapped it then went back to study Sofi’s Portrait of Amilcare, Minerva, and Asdrubale.
Does this man look like a cruel stage dad? I realized that I had to listen to Sofonisba’s voice, spoken so clearly through her brush strokes, if only I would get out of the way and let her talk. I had to stop trying to force a story I’d cooked up onto my characters and start to let the paintings lead my writing. 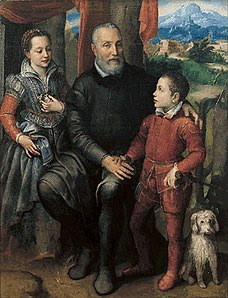 Looking into Amilcare’s eyes, I saw that he was gentle and kind, playful yet brave. It was easy to understand him because that was how my father was. What a joy it was to write about Amilcare once I let him be who he should be.

The beauty of writing a novel about a portraitist who painted friends and family is that a source for figuring out the characters is right at hand. Best of all, I had a visual record of my main character. 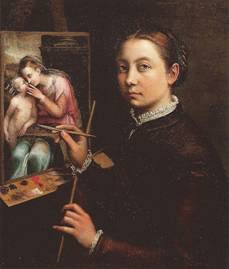 Who needs letters and other archival information when one can just look into those large clear eyes and see the brave young woman within? Coupled with her sensitive portraits of young Elisabeth of Valois (who looks as if she’s staunching a chuckle), 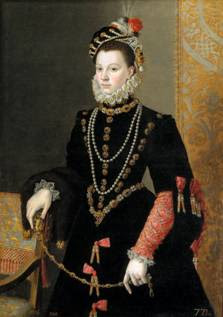 or King Felipe II, so maligned by his enemies, (and feared by Sofi,) yet so obviously kind and good, as seen in this painting Sofi did a few years after my story took place, 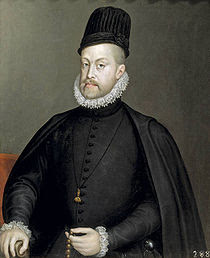 I had all the material I needed. I just had to listen.

Thanks Lynn!  There's still time to enter to win a copy of Creation of Eve. Just leave a comment by March 21s at 12 p.m.
Creation of Eve Lynn Cullen

looking for women said…
Very nice article i must say. Have you ever thought about starting a writing career? I would definately buy your books!
October 21, 2011 at 2:12 PM