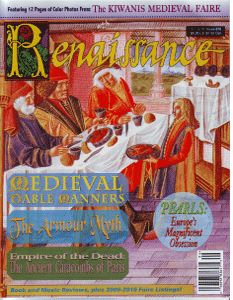 For years I'd seen Renaissance Magazine in bookstores and never picked up a copy. For some reason I thought it was just a magazine for people who liked Renaissance Faires. That was until recently when I ordered a back issue that had an article on Veronica Franco. It turns out that I was wrong. Sure Renaissance Magazine has a lot of ads in the back for the various Ren Faires around the country but it is also filled with interesting and unusual articles.

The Veronica Franco (Issue #41) issue alone has several articles that I found interesting, including one tourism in Medieval Venice, the Origins of the Mafia and Venetian gondolas. Looking at some of the articles in the back issues made me salivate. Whole issues devoted to Robin Hood, and Women of Arthurian Legend just to name a few. I was in heaven. Unfortunatley back issues cost a fortune. The one I ordered cost a whopping $25! So it will take me awhile before I get around to ordering any other issues. However, the magazine itself is $5.95 for a single issue and $29 for a one-year subscription of 6 issues. If you are curious about the magazine, most Barnes & Nobles and Borders Book Stores carry it. 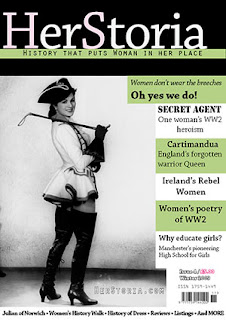 My second gem comes courtesy of Amy at Passages to the Past who first brought the magazine to the attention of history geeks everywhere in the blogosphere. Herstoria as the cover suggests is a new British magazine that focuses on women in history. Of course, the minute that I heard about it, I had to subscribe. International subscription are about $45.00 for the year which gets you 4 issues, but if you are a new subscriber they include one of the back issues with your first issue. Unfortunately my copies arrived damaged, so I had to wait for them to dry out before I coudl read them!

There are also book and film reviews, conference and museum listings etc. At the moment, the focus in the magazine is mainly on the history of women in Britain and Europe, but hopefully if the readership of the magazine grows, they will expand their focus.

I highly recommend both of these magazines.
Herstoria Magazines for History Geeks Renaissance Magazine

Celticlady's Reviews said…
Hubby and I have beern reading the Renaissance Magazine for about 5 years or somewhere around that. We both love it..Herstoria I have heard of but have not actually read a copy..Thanks for the post!!
February 6, 2010 at 3:18 PM

Dreaming B said…
I've purchased copies of Renaissance Magazine from time to time at B&N and Borders. People who see the issues around my house accuse me of secretly dressing up and going to Renaissance Fairs, so I make sure to open the magazine up and show them it's not about that! Except, for of course, the ads!
February 6, 2010 at 3:54 PM

Elizabeth Kerri Mahon said…
Thanks for the comments. I'm so sorry that I had that impression about the magazine. Renaissance is awesome, and I've now subscribed. Although it's nice to know where I can order a lovely Renaissance outfit!
February 7, 2010 at 4:17 PM

Nicola Cornick said…
I hadn't heard of HerStoria but it sounds excellent. I read a book about Cartimandua a couple of years ago. She was a fascinating woman!
February 9, 2010 at 8:41 AM

Elizabeth Kerri Mahon said…
Thanks Nicola. HerStoria seems to have only put a few issues so far. I'm writing a chapter on Boudica for my book, and finding out about Cartimanduas fascinating. This woman needs her own historical fiction book!
February 9, 2010 at 9:59 AM

Bearded Lady said…
I am such a geek when it comes to my history magazines. My husband will come in the door with the mail and say - "guess what came...Renaissance Magazine." And then start jumping up and down like a little girl. (because I really do get that giddy with my history magazines).