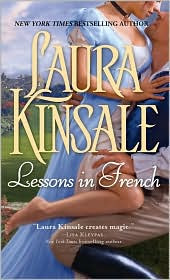 Trevelyn and Callie are childhood sweethearts with a taste for adventure. Until the fateful day her father discovers them embracing in the carriage and in a furious frenzy drives Trevelyn away in disgrace. Nine long, lonely years later, Trevelyn returns. Callie is shocked to discover that he can still make her blood race and fill her life with mischief, excitement and scandal. He would give her the world, but he can't give her the one thing she wants more than anything - himself. For Trevelyn, Callie is a spark of light in a world of darkness and deceit.  Before he can bear to say his last good-byes, he's determined to sweep her into one last, fateful adventure, just for the two of them.

Ah, a second chance at love story, I'm a sucker for those. Set during the 1820's, Lessons in French is a heart-warming love story that had a little too much going on for this reader. Lady Callista Taillefaire (Callie) is now 27, and has been jilted three times which is quite scandalous for the time. To loose a fiance is one thing, to loose three is carelessness to paraphrase Oscar Wilde. She's made a life for herself, raising cattle, particularly her prize-winning bull, Hubert. When Trevelyn returns having remade his family's fortune(and how he has done that is one of the more interesting aspects of the story), she can't help but be drawn to him again. The course of true love never runs smooth and this one is no exception. No sooner is the flame of love rekindled than Trevelyn gets into a spot of trouble and is forced to flee.

Readers who know Kinsale from her heart-wrenching earlier tales might find this book a huge departure. It's a lot lighter in tone then Shadowheart. For me this book was very reminiscent of Georgette Heyer, and distantly related to Jane Austen. You know a book that is set in a small village, filled with quirky secondary characters. In Lessons in French that includes Trevelyan's valet Jock, Callie's sister Hermey, Barton and several others. While I enjoyed reading about Trevelyn’s experiences in the Napoleonic wars with another of Callie’s former suitors, Major Sturgeon, there were times when I felt that all the sub-plots were getting in the way of the main romance. I found myself yelling 'just get on with it,' quite a few times while reading. There were also times when I put the book down because it didn't hold my interest.

The book is much longer than the average historical romance at over four hundred pages, and  I felt that the story dragged a bit, particulary the scenes when Callie and Trevelyn were dealing with her runaway bull Hubert. Although Trevelyn and Callie have many witty exchanges, sometimes the humor felt forced, as if the author were trying too hard to be funny. However, I enjoyed Callie's relationship with her sister Hermione, as well as Trevelyn's with his mother. It's rare to have a hero whose family are French exiles from the revolution, nor a hero who starts out fighting for Napoleon. Callie is one of the more delightful heroines that I've read in a long time. Despite the fact that she's been jilted three times, she's not cynical or jaded. She has a sense of humor about the whole situation. I liked the fact that Trevelyn had real reasons for keeping Callie at a distance, although he longs to reignite what had just been a spark nine years ago. But the book, at least for me,  was lacking a little bit in the sexual tension department between the hero and heroine. But I have to say that my favorite character in the whole book was Hubert. Yes, my heart was won by a bull, a very charismatic bull by the way.

Despite my few quibbles, Lessons in Love is well worth the read particularly if you are a reader who enjoys a meatier romance than is usually found on bookshelves.
Historical Romance Laura Kinsale

KT Grant said…
What do you think about the up in the air possibility about Trev being a virgin? I would like to think he is, but not definite.
January 25, 2010 at 2:11 PM

Elizabeth Kerri Mahon said…
Considering the fact that almost two hundred pages went by before he even so much as kissed her, I wouldn't be surprised. Although he was pretty all over her in the flashback scenes to their youth.
January 25, 2010 at 3:38 PM

KT Grant said…
Kinsale is very sneaky with Trev because at one point he mentions how he made sure not to get a woman pregnant and then he tells Callie how he'd stop from going the distance. Hmm...
January 27, 2010 at 9:46 AM