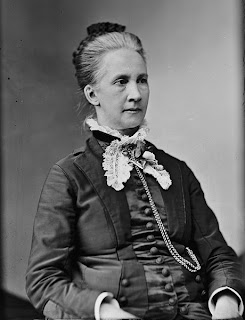 Scandalous Women is pleased to welcome Guest Blogger Talia Weisberg. Talia is a self-described radical feminist. She won the 2009 Regional National History Day competition with the entry Belva Lockwood: Unlocking Doors for Women, and calls Lockwood her role model. She also created an organization, Bleep!, whose mission is to eradicate the usage of cursing among kids and teens today (http://sites.google.com/site/bleeporganization).

When one hears First-Wave Feminism or suffrage movement, one normally thinks of women like Susan B. Anthony and Elizabeth Cady Stanton. If you know more about the women’s rights movement, you might think of women like Alice Paul, and Carrie Chapman Catt. These are all women who made enormous contributions to the women’s rights movement, and their accomplishments should never be downplayed. However, there is another key player of the suffrage movement that has fallen into obscurity: Belva Lockwood.

Belva Lockwood was born on October 24, 1830 to a traditional family in upstate New York. She was a precocious child, reading the whole Bible by age ten. Her father never appreciated her brilliance, though; he told her that “girls should get married, only boys go to college.” Even though Lockwood wanted to pursue a higher education, he wouldn’t allow her to. Because her family needed extra income, she began teaching at age fourteen. When she discovered that her salary was less than half of her male colleagues’, she was furious and complained to the school board. They told her that the men had families to support, and needed a higher salary. Fuming, she confided in her minister’s wife, who told her, “I can’t help you; you cannot help yourself, for it is the way of the world.” This comment sparked Lockwood’s desire to combat inequality of the sexes. However, with lack of funds or education, she put her dreams on hold, getting married and giving birth instead. After her husband died in a workplace accident just a few years later, she felt hopeless. After teaching in a poorly-paid job for several months, she decided to take her singleness as an opportunity to deviate from the traditional woman’s life, and enrolled in a newly-coeducational college.

After graduating, Lockwood resumed her teaching career, radicalizing the curriculums of several girls’ schools to include calisthenics and public speaking courses, among other typically male classes. Bored, she moved to Washington, D.C., seeing that everything that changed the country happened there. While in D.C., she found out that women in the federal workforce received a lower salary than their male counterparts. Horrified at this blatant discrimination, she drafted a bill that forbade this, in addition to outlawing sex discrimination. While her bill was defeated, a similar bill was passed. Her work bore fruit; the percent of women employed by the federal government with a salary over nine hundred dollars jumped from 4% to 20% in the 1870s.

After her work with the bill was done, she wanted to enroll in law school, but was rejected by all of the universities she applied to on account of her sex. In response to her rejections, the government established the coeducational National University Law School. Fourteen other women enrolled with Lockwood; only one graduated with her. Despite the fact that they completed all necessary courses, they were denied their diplomas. After months of unsuccessfully fighting for it, she took things into her own hands and wrote to President Grant, who was also the head of National University Law School, requesting her diploma. She got it within days, and was admitted to the Washington, D.C. bar soon afterward.

In addition to Lockwood’s work in the legal field, she also ran for president. In 1884, Lockwood was nominated (originally jokingly) by the Equal Rights Party. Many other major feminists condemned her campaign, feeling that she was making a mockery of the suffrage movement. Men also disapproved of her presidential bid, even making Mother Hubbard Campaigns, where they would dress up like Lockwood and make nonsensical speeches to mock her. Despite the lack of support, she campaigned in earnest, going on a lecture series across the East Coast and Midwest, her running partner Marietta Snow on the West Coast. Nonetheless, only 4,711 votes were accredited to her, although she felt that many votes cast in her name were thrown out or given to other candidates. She ran again in 1888, but this campaign was criticized even more; she only officially received one vote.

After her unsuccessful presidential runs, she continued her law practice. Lockwood had an extremely lucrative career, making $3,500 a year when 80% of families lived off of $500 or less. She handled her biggest case in 1905, when she represented the Eastern Cherokees in a lawsuit against the government to compensate the Eastern and Emigrant Cherokees for the land expropriated from them during the Trail of Tears era. She won, awarding the Cherokees $4.5 million, the largest case ever won against the federal government at the time. The government’s appeal was in front of the United States Supreme Court, and when Lockwood spoke, it was the second time she argued in front of the Supreme Court.

Sadly, this was the last major accomplishment in this scandalous woman’s life. She died on May 19, 1917, in the middle of serious attempts to gain the right to vote. While Lockwood may have died without ever being able to vote, her actions were indispensable to the future of the suffrage and women’s rights movement. As the first woman to speak in front of the Supreme Court and the first successful female lawyer, she opened doors for women to enter the law field. Women currently make up 47.5% of law students and 33% of all practicing lawyers; such figures would be impossible without Lockwood’s contribution to herstory. Lockwood’s presidential bids also allowed women to aspire to the highest levels of government. Hundreds of women have run for president, and there have even been a few real contenders, like Hillary Clinton. Lockwood also opened doors for women in politics in general; without Lockwood’s influence, the thousands of women who hold office would never have been able to achieve success. Despite the fact that Belva Lockwood is a woman who has fallen into obscurity, she has hugely impacted the world as we know it.
Belva Lockwood

Tinky said…
This is fascinating; like most readers, I would imagine, I'd never heard of Lockwood before! Thank you. If you could recommend a book or article about her for further reading (please), I'd be most appreciative!
Tinky
http://www.ourgrandmotherskitchens.com
January 29, 2010 at 11:32 AM

Elizabeth Kerri Mahon said…
Belva Lockwood : the woman who would be president by Jill Norgren.
January 29, 2010 at 12:58 PM

Talia bat Pessi said…
Another great book I used for my research was People's Lawyers: Crusaders for Justice in American History by Diana Klebanow and Franklin L. Jonas, plus the Norgren book.
January 29, 2010 at 3:09 PM

Unknown said…
Thank you for sharing about this very interesting woman from upstate New York. I called my 80 year old Aunt who lived there for many years and she had never heard of her either. We spent hours talking about her so I hopped on half.com and found a copy of Belva Lockwood:the woman who would be President for a good price. I'll have to read fast as my aunt wants it as soon as I finish.
January 31, 2010 at 10:34 PM

Elizabeth Kerri Mahon said…
I think its a shame how many amazing women that go unrecognized in this country. Women's history should be a required course in every college!
February 2, 2010 at 11:25 AM

I had a problem with the new template that I had designed for the site. I'm hoping that the designer can fix it but instead of just looking at a whole page of photobucket sign-ins, I thought I would just put up the old design.
February 6, 2010 at 10:37 AM