Book Alert: Seneca Falls and the Origins of the Women's Right's Movement 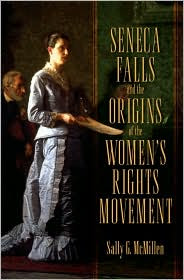 Anne Zaccardelli, Library and Online Sales Assistant, at the Oxford University Press alerted me to the paperback release of this book.

Synopsis:
In the quiet town of Seneca Falls, New York, over the course of two days in July, 1848, a small group of women and men, led by Elizabeth Cady Stanton and Lucretia Mott, held a convention that would launch the women's rights movement and change the course of history. In Seneca Falls and the Origins of the Women's Rights Movement, Sally McMillen reveals, for the first time, the full significance of that revolutionary convention and the enormous changes it produced. The book covers 50 years of women's activism, from 1840 to 1890, focusing on four extraordinary figures--Mott, Stanton, Lucy Stone, and Susan B. Anthony. McMillen tells the stories of their lives, how they came to take up the cause of women's rights, the astonishing advances they made during their lifetimes, and the far-reaching effects of the work they did. At the convention they asserted full equality with men, argued for greater legal rights, greater professional and education opportunities, and the right to vote--ideas considered wildly radical at the time. Indeed, looking back at the convention two years later, Anthony called it the grandest and greatest reform of all time.

There is also an excellent interview with Professor McMillen at the publisher's web-site:  I haven't read this book myself, but it sounds like an amazing history of the movement that should be in every woman's library.
Seneca Falls

Von said…
All our role models and to be thanked for what they did for us.So many unsung women in so many countries,good to see a few of them recognised.
January 27, 2010 at 6:17 PM

Essie Fox said…
We should all know more about this. We take so much for granted today. That's why I feel disappointed when people don't vote or say they are not interested. I'm particularly curious as to how, as the years went on, suffrage and the movement of spiritualism became linked because it gave women another means of voicing their views openly.
January 28, 2010 at 5:33 AM

Elizabeth Kerri Mahon said…
That's one of my favorite topics Virtual Victorian. I wrote a post a while back just before the election about Victoria Woodhull who managed to combine spiritualism and suffrage in her own unique way.
January 28, 2010 at 9:26 AM

Digger said…
I very much enjoyed "Seneca Falls and the Origins"; read it last year. Virtual Victorian: check out Ghosts of Futures Past: Spiritualism and the Cultural Politics of Nineteenth-Century America by Molly McGarry. I found the writing a bit heavy on the academic-ese, but the subject matter was fascinating.
February 21, 2010 at 4:19 PM