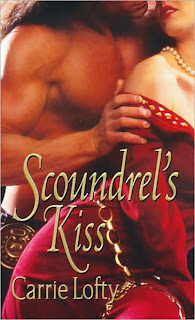 
Turning his back on his old life as a rogue, Gavriel de Marqueda has joined a monastic order in Spain and taken a vow of chastity. Before he becomes a monk, he must pass one final test: help a woman who has lost her way. But when he lays eyes on Ada of Keyworth, he is tempted beyond measure by her sultry beauty and dangerous curves. . .

Far from her home in England, Ada has been battling inner demons for more than a year. When she discovers that her only friend has abandoned her, she has no choice but to grudgingly accept Gavriel's help. But Ada is not fooled. Though Gavriel wears the robes of a monk, Ada sees that he is a virile man who looks at her with a hunger that matches her own—one that begs to be satisfied again and again. . .

Set in 13th century Spain, Scoundrel's Kiss is a perfect blend of historical fiction and romance. First off, the setting. There aren't many romances set in Medieval Spain and I don't understand why. The fight between the Spanish and the Moors for control of the country would seem to be the perfect backdrop and Scoundrel's Kiss is certainly proof of just how gripping the conflict can be. The sights, the sounds and the smells of Medieval Spain are ably depicted. The reader feels as if they are there. But what makes this book so special are the characters. Ada and Gavriel are both flawed individuals with secrets that torment them. I don't think I've ever seen two characters quite like this beffore. Ada is stubborn, strong, smart, snarky, and compassionate with the ability to use a dagger if necessary. And highly educated at a time, when most men and women were not literate. She's more than a match for Gavriel who is desperate to atone for the sins that he committed in his previous life before he joins the Order. What Lofty does so brilliantly in this book is to bring these two unlikely people together, and slowly have them fall in love, despite their better judgement. Ada and Gavriel earn their happy ending.

Lofty has also with a few deft keystrokes of her computer, created a compelling cast of secondary characters to support Ada and Gavriel. Blanca, Fernan and Jacob, and two memorable villains Pacheco and Joaquin de Silva, add depth to her novel. Just when you think you know who these characters are, Lofty reveals another layer to their characters. It's been a long time since I was sad to see a historical romance end, but I wasn't quite ready to leave the world of Scoundrel's Kiss.  I will definitely be seeking out a copy of her first book, What A Scoundrel Wants, and I look forward to reading future historical romances by Carrie Lofty.

For history geeks like me, Lofty also includes an afterword, where she discusses the history behind the book and what liberties she took. She also provides a list of resources on her web-site which is manna for someone like me.

Patricia Altner said…
Thanks for this review. The history of Moorish Spain has fascinated me for years.

Another title readers might find of interest is The Lions of al-Rassan by Guy Gavriel Kay. It is shelved in the fantasy section of bookstores and libraries because Kay uses alternate names for the three religions that coexisted at the time - Christian, Moslem, Judiasm. Kay writes an alternate history but a one that is well researched.

Nominate it and any other historical fiction or fact blogs you love at http://historicalnovelblogs.blogspot.com .

Unknown said…
Education is a must for everyone, only then a person will communicate and face problems easily in all aspects. Plenty of job openings are there but it is meant only for the right candidate, its the right time to develop new skills to become one of the right person what the company/organization expects.
January 6, 2010 at 3:57 AM